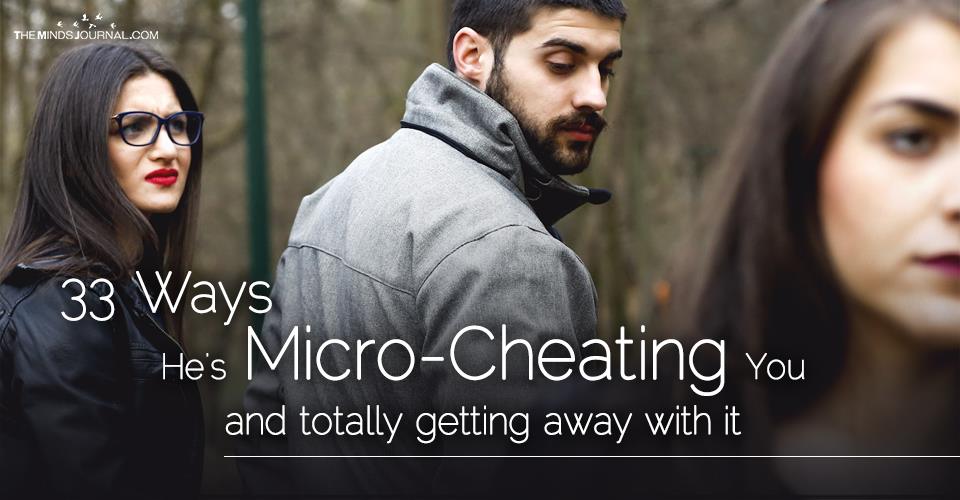 What if you are the victim of micro cheating? Check out 33 ways your boyfriend is micro cheating (and totally getting away with it).

Micro-cheating is rather simple if you feel the need to hide it, if you feel guilty you are. Its not about having friendships its about betrayals that you know you are doing and pretending its nothing when you know deep down its something. The conscience judges this one.

1. Constantly reaching out to female “just a friend” for minor issues.

2. Deliberately leaving his wedding ring at home when he’s going out with his boys just so that others don’t know that he’s taken.

3. Gives the waitress a ridiculously high amount as tip just because she is attractive.

4. Forgetting about you at parties and constantly being engrossed in conversations with other women.

5. His Instagram following list it full of hot girls and he’s so religiously following their posts that he actually thinks he knows them.

6. Unnecessarily exchanging contacts with females for official purpose even though there isn’t the slightest of chance of them collaborating ever.

Read The Reason Each Zodiac Cheats In A Relationship

7. Sending inappropriate videos and jokes related to sexual humour to other females he calls as friends.

8. Following up with a “nice to meet you” message unnecessarily.

9. He is too interested in constantly checking other women’s posts on social media handles than his own girls.

10. Speaking about his emotions to other females but not his own girlfriend.

11. Making sure that he gets back home and compliments the woman he had just co-incidentally met last night.

12. Not mentioning about his significant other in front of his mates and friends so that they aren’t aware of him being taken.

13. Not giving your relationship a tag in front of others.

14. Sometimes he often openly denies being in a relationship with you just to initiate a conversation with other females at clubs.

15. Closing his eyes when he needs a minute to escape and daydreaming about the girl he’s crushing on because she’s the only thing he has on her mind right now.

16. His girlfriend is never the first person he goes to when anything good happens to him.

17. Still stuck on an ex and reaches out to them when it’s important date like anniversary etc.

18. Doing a little extra for random girls. Even tags them in cute posts on different social media.

19. Telling other girls that he has been thinking about them.

Read The #1 Cause Of Cheating In Relationships

20. When he has a tough time in the relationship, he starts giving hope to other females that he will soon be available.

22. Picking up the tab in an extra way just to look cool around.

23. Choosing to spend more time with other females and not his girlfriend.

24. Sending past pictures to exes just to revive the past.

25. Creating inside jokes and code words with other women.

26. Changes your way of dressing so that you resemble someone else.

27. Gifting his girlfriend with a bottle of the perfume his crush wears so she’ll smell like his latest fantasy chick.

28. Still holding on to the piece of clothing he was given by his ex even though it’s completely out of fashion.

29. Constantly talks about some other women in front of his friends and never about you.

30. Downplaying a certain woman’s awesomeness whenever she’s mentioned around his significant other as if proactively doing damage control.

31. Saving other girls’ contacts with a different name on his phone so that he isn’t caught.

32. Tagging other girls on random posts because it reminds him of them.

33. Purposefully never mentioning about his girlfriend.