How Toxic Fathers Affect Their Daughters Into Adulthood 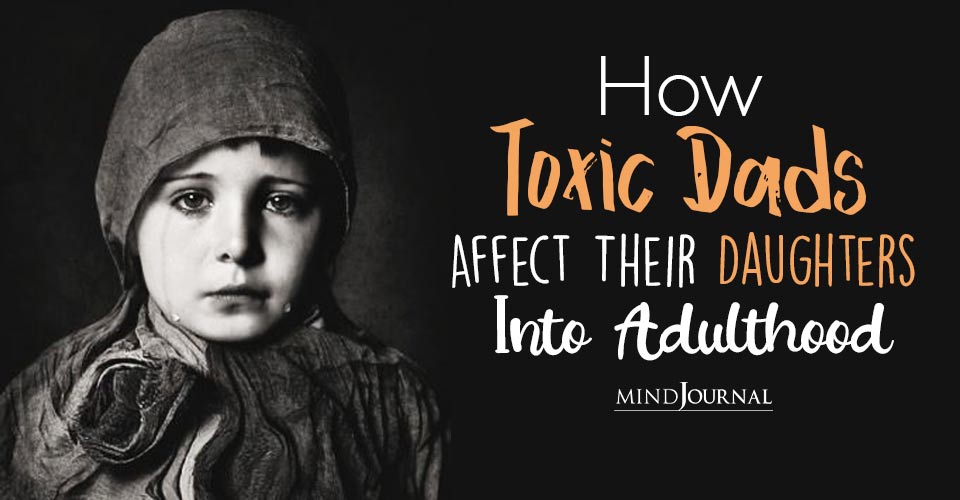 Toxic fathers can have far-reaching, and even permanent effects on their daughters’ lives, even after they have entered adulthood.

A healthy father-daughter relationship acts as a scaffolding for building a beautiful future for the daughter.

The one that teaches you how the world functions. The one that sees you totter and fall and get back up again, offering unrelenting support. The one that set your idea of men when you couldn’t even speak your own truth. The father is all of this and much more for his daughter.

Healthy father-and-daughter relationships tend to be the spine behind healthier societies and a healthier world. A bond like this ensures healthy examples being set out, the ability to be strong yet compassionate, and can often influence the way the daughter functions as a human being all through life.

Unfortunately, this ideal isn’t attained in every father daughter relationship. The reasons are many, but what really holds is the impact such a relationship has on the child and later the grown-up.

The question is: Can you tell if who you’ve become is partly because of the relationship you’ve shared with your father?

To get an idea, see if one of these patterns seems familiar to you.

Related: Being a Father Versus Being a Dad: 6 Important Differences

When you recall the time you spent with your father during childhood, you recall a person who was hardly ever there.

And “hardly ever there” does not mean physically, which boils down to an extremely busy father who had too much work or would fail to show up for parent-teacher meetings.

Absenteeism is often more subtle than you think.

This could have been someone who sat at the same table with you, and yet you felt like he was somewhere else. You may have tried to convince yourself that he’s emotionally invested. The signs of holding and engaging though were entirely missing.

It is likely that you sensed his own behavior wasn’t much different towards his own wife, who also happens to be your mother.

Was your childhood peppered with scenes of rage and extreme anger, all of it coming from a father that the children were perpetually scared of?

Would you check in with yourself a hundred times before you spoke your truth to your father, fearing he might explode all over again?

Or was your home an out-and-out minefield every single day, where safety was a constant concern?

Abuse by toxic dads, overt or covert, can be a real cause of women finding it difficult to navigate their personal lives.

Related: Growing Up With A Toxic Father: How Fathers Impact A Daughter’s Romantic Relationships

The relationship pattern with toxic dads has similarities with absenteeism, but there are differences too.

An escapist father often has addictions, engagements that don’t involve his current family, and feels an overwhelming need to somehow stay detached from his living situation, while maintaining a semblance that he’s part of a “family”.

Alcoholism and drug use are common among escapist fathers, leaving daughters confused about where they stand in their relationship with their fathers.

You might already be familiar with co-dependency between partners. But did you know codependency is as much a truth when it comes to toxic dads?

If you experienced (and still perhaps experience) your father to be this person who treats you as an extension of himself, no matter the context or the stage of life, it’s likely that you’re dealing with co-dependency.

This is a state of fusion where a father feels so inextricably connected to his daughter, he can’t give up control over her life. This is is the case of a father that doesn’t invest – it’s one where the investment is so high, the daughter might feel a silent fear of speaking through her authenticity and taking her own decisions, for her own sake.

How The Past Might Still Be Affecting You In Your Adulthood

The reason toxic dads can have a long-term impact is because this is a primary bond gone wrong.

As children grow up, they look to their caregivers for examples and support, in verbal and non-verbal ways. As a daughter, you may not have consciously registered how your relationship with your father was leaving residues for you to resolve.

But here are a few signs you may need to look deeper into:

1. You find it difficult to commit

Commitment is a sign that you’re ready to take any relationship to the next stage.

There is locked-up pain in such a situation, which can only be released once it has been explored.

Related: A Recent Study Reveals Fathers Have More Influence in A Daughter’s Life Than Mothers

2. You allow others to take control of your life

A codependent father can often make his daughter believe what he’s doing is for her life to work better than ever.

However, co-dependency realistically leads to daughters feeling like they are not able to get a hang of their own life. It could be about a career they want to pursue, a relationship they want to get into, or even the kind of home they want to live in.

If you find yourself going back to paternal advice for every little thing, it might be a warning sign.

3. You are always angry

No one unhealthy father daughter relationship pattern leads to anger.

It is primarily a lurking sense of injustice that leads to a grown-up daughter feeling anger, almost all the time.

If this sounds like you, perhaps it’s time to hit the pause button and examine your feelings more closely than you have done ever.

4. You rush into relationships too fast

Relationships with toxic dads can also be the cause of women seeking out a relationship with almost every man they meet. Patterns like absenteeism and escapism can leave a daughter feeling like they have some void to fulfill.

Unconsciously, what they feel is a need for closeness and presence and in an adult state, they look to any man that comes their way, for that support.

5. You’re not sure about feeling love

When a young girl grows up with a father, whose feelings for her are a big question, given the disengagement, it may lead to the person feeling loveless as they grow up.

Sometimes, the consequence could also be someone who doubts that they can love ever and also ever find love that can make them feel happy and safe.

A consistent lack of hope in one’s ability to give and receive love can be a result of having toxic dads.

Related: Narcissistic Fathers: The Dark Shadow They Cast From Childhood To Adulthood

It’s not an easy task to open up the past, sit with it, and examine what may have made you the person that you are today. But relationships with primary caregivers often give us the clues we need to move on for good in life.

With a little time and patience, we can create a world for ourselves that is safe, trustworthy, and fulfilling.