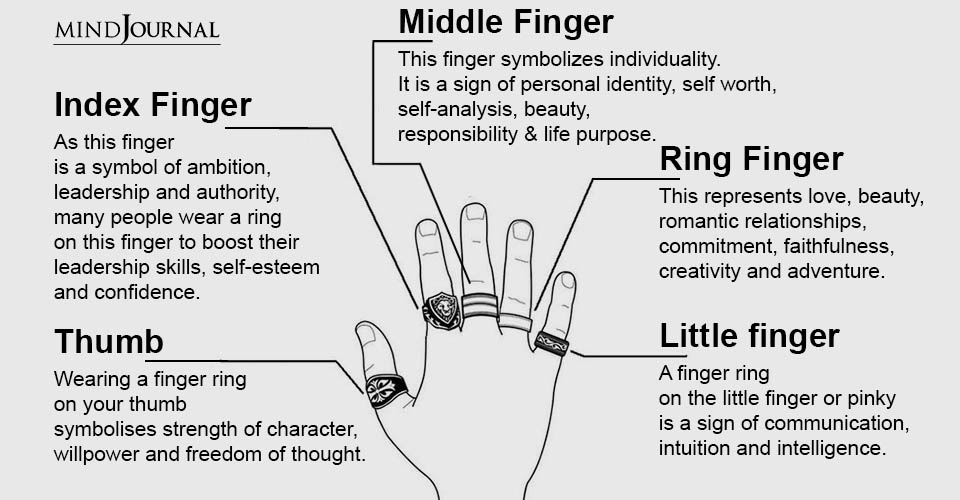 Do you know the significance of your finger rings? Historically, rings have symbolized love, fidelity, devotion, eternity, and even spirituality. Let’s take a look at what your rings symbolize.

How much do you know about the meaning of the rings you wear? Other than wedding rings, most people have no idea about the symbolism of rings. We simply wear it on the finger that fits it best.

Although this may be okay from a fashion perspective, this may often send the wrong message to other people. This is why it is important that we understand more about the hidden world of rings and what they actually mean.

“The reality is that rings send a message. For thousands of years, men have worn them to signal status, wealth, commitment, and association,” states an article in the Art Of Manliness.

In general, finger rings carry a lot of meanings in different cultures and subcultures. Each finger with a ring can carry a different message in different parts of the world. However, despite what region, culture, or country you may find yourself in, rings are often considered as a universal sign of wealth, according to thecoolist. However, there are other meanings and symbols associated with wearing rings.

For instance, engagement rings and wedding rings show love, commitment, and bonding. Wedding rings can be found in almost every culture and civilization with varying degrees of use and significance. This tradition originally started with the neanderthals as men offered small wreaths made from grasses or twigs to their mates. In ancient Egypt, men would offer women a variation of the modern wedding ring that was a sign of immortal and eternal love as the ancient Egyptians strongly believed in the afterlife. For them, the narrow bands, woven from reeds and papyrus, worn around the finger, was a sign of eternity.

For the Romans, finger rings were mostly a symbol of control and power over their mate, rather than a sign of love. The Romans created their rings from expensive materials like leather, bone, and metal. It was mainly used by the men to claim women with a metal circle. This tradition was known as Anulus Pronubus where the husband would put the iron ring on their mate’s left-hand third finger.

The traditional Irish Claddagh ring, on the other hand, is a symbol of friendship, loyalty, and love. Originated during the 17th century, this finger ringer has a unique design with two hands holding a crowned heart – the hands depict friendship, the crown is a sign of loyalty and the heart is a symbol of love.

So no matter what ring you wear on which finger, it carries some significance and message about you, your family, and your culture.

Apart from cultural significance, finger rings also have a lot of spiritual significance as well. It is believed that celestial energy and the blessings of the Supreme Being or the Universe or God is channeled through the hole in the middle of the ring.

“The hole is the receptacle for the energy that makes the wheel of destiny turn. The ring is the symbol of the power of great men and gives legal authority when adorned with the seal that grants it,” write authors M.A. Carrillo de Albornoz & M.A. Fernández in an article published in the school of philosophy New Acropolis (Organización Internacional Nueva Acrópolis).

Above everything else, rings symbolize a bond, a vow, or a union. “Folk tales and songs abound with stories of rings as proof of identity. Some rings convey magic. Others are more sinister. Myth and folklore abound with rings as agents of the supernatural” explains Sally Feldman, Head of the School of Media, Arts and Design at the University of Westminster.

According to Greek mythology, Heracles was permitted by Zeus to free Prometheus on the condition that Prometheus will wear a finger ring as a sign of submission to Zeus. Here the ring represented a bond that prevented Prometheus from acting freely. According to Buddhist beliefs, rings symbolize the indefinite heaven. In Hinduism, Shiva, one of the principal Hindu deities, is found to be encircled in a circle of fire. This can be specifically observed in the deity’s Nataraja avatar.

Here the ring represents the Zodiacal circle and the endless wheel of nature. As per Nordic mythology, rings are often associated with dwarfs and elves who offer them to humans as a sign of protection. They were also symbols of destiny and doom. While, the Vikings considered rings as a symbol of power, fame, and fortune. It was also a form of currency and a gift of honor.

Authors M.A. Carrillo de Albornoz & M.A. Fernández adds “On the esoteric plane, the ring is associated with the girdle, which guards places and protects secrets. To obtain a ring is like opening a door; to set a ring on one’s own finger is to protect oneself and to place it on somebody else’s finger is to accept a gift from someone else.”

Read also: The Symbol You Pick Will Tell You Which Phase of Life You Have Entered

What wearing rings of each finger means

Before we can understand the deeper meaning of what wearing rings on each finger specifically means, we need to take a quick look at the significance of finger rings in the left and right hand.

Fortunately, in most cultures, both hands are considered more or less equal when it comes to wearing rings. The hand necessarily doesn’t change the meaning or intention of a ring. However, most of us tend to wear important and valuable rings in our dominant hand.

This is likely due to our personal preference rather than a deep meaning. “For the most part there aren’t any ironclad rules about which hand you wear your ring(s) on,’ explains Antonio Centeno, founder of Real Men Real Style. He adds “Engagement and wedding rings are exceptions – there are a lot of specific cultural traditions.”

Now that we have established that it doesn’t really matter which hand you wear your rings on, let us understand the significance of wearing rings in each finger actually means:

The thumb is often seen as a sign of independence, flexibility, and willpower. Hence, wearing a finger ring on your thumb symbolizes the strength of character, willpower, and freedom of thought.

According to Atlantic City Jewelry, wearing a ring on your right thumb is a sign of ambitious hesitation, while a thumb ring on the left hand is a sign of inner conflict. In the current scenario, a thumb ring is often worn to make a statement and as a sign of wealth.

“In most societies, a thumb ring on a man is a sign of wealth or influence,” explains Antonio Centeno. He adds “The thumb doesn’t have an astrological association, but in classic mythology (and pre-scientific medicine) it was believed to be an indicator of character: strong, straight thumbs meant an authoritative personality, while crooked ones were seen as a sign of wickedness or dishonesty.”

The index finger is “a good place for things like class rings, fraternal rings, or family and membership crests,” writes Antonio. He suggests “Anything that you want to be used frequently and emphatically in your gestures can go on the index finger.” Astrologically, this finger is associated with Jupiter symbolizing power and authority.

Although it is highly uncommon to wear a finger ring on this digit, this finger symbolizes individuality. It is a sign of personal identity, self worth, self-analysis, beauty, responsibility, and life purpose. It is often suggested that one should wear a ring on this finger if they are seeking balance in life. As it is located in the center, this finger is associated with Saturn.

The fourth finger is the most common finger for wearing rings, mainly the wedding ring. Almost all cultures across the world require a wedding ring to be worn during marriages. This is because it is believed that the digit is closely connected to the artery which connects it to our heart.

However, Native Americans believe that a ring on this finger represents independence and affiliation. From an astrological perspective, this finger is associated with the planet Mercury, considered as a sign of intelligence and thought.

Antonio Centeno explains “This is often the first choice for a man who wants to wear a statement ring.” He adds “Pinky rings tend to be among the “busiest” or flashiest of designs. It’s where you wear things when you want attention paid to them.”

Read also: What Does Your Pinky – Little Finger Says About You!

Which finger ring do you wear?

1 thought on “Symbolism Of Finger Rings: What Wearing Rings On Each Finger Means”

previousEscaping The Matrix of Depression: The Hidden Antidote That Will Set You Free
next5 Reasons Setting Expectations In A New Relationship Is Key To Its Success