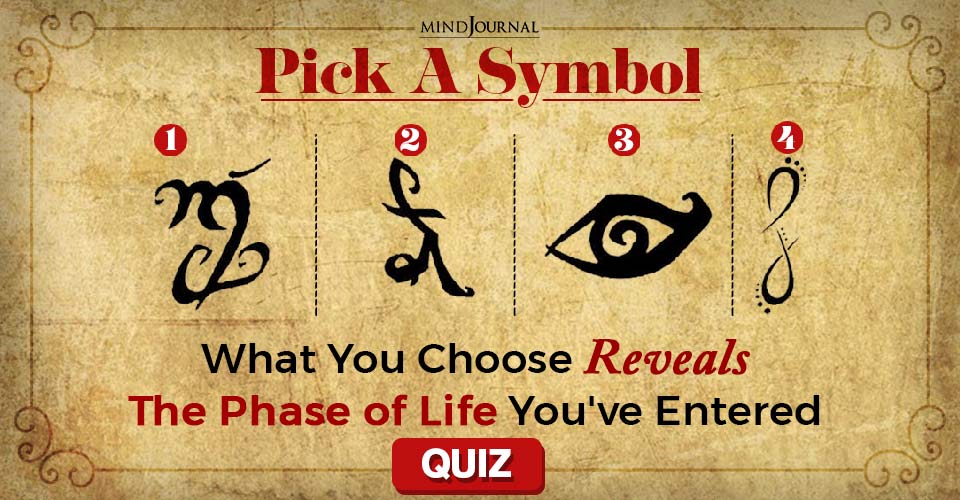 As we pass through the different phases of life, our personalities are put through many lasting changes. This is part and parcel of the human experience and none of us can avoid it even if we try to.

Some may be stuck in one phase longer than others. Interestingly, these phases don’t depend on how old a person is for their occurrence, and you can enter into a phase of life at any age as age has no bearing here.

According to Carl Jung, a psychiatrist and psychoanalyst from Switzerland and one of the most influential figures in the field of psychology, these phases of life depend on our individual personalities and the paths we are meant to take.

To find out more about the phase of your life that you’ve entered at the moment, take a look at all these symbols and pick the symbol that speaks to you most or most resonates with you.

Go with your gut and don’t overanalyze the symbols when taking this personality test. Trust your instincts and your subconscious to show you the right choice and go with that.

Once you’ve found your soul symbol and one that feels important to you personally, scroll down to read more about its meaning and the phase of life you have entered.

Related: Choose an Alchemical Symbol – Find Out what Your Spirit Thirsts for

The most immature of all the different phases of life, the traits most commonly found in those who are currently going through the phase of the athlete are self-obsession and narcissism.
It is a time when people are overly worried about their looks and their figure and little else matters.

Due to their immaturity, people in this phase live as if the universe revolves around them and only them. They are blind to the struggles of others and since this is also a selfish phase, they don’t really care to know about that either.

Ironically, though narcissism is a key trait of this face, so are self-criticism and a lack of self-esteem. Though they are two extremes, they go hand in hand during the athlete phase.

Either the person’s ego is larger than life and impossible to deflate or they lack confidence in themselves. They constantly think about their appearance and whether they’ve made any mistakes in the way they’ve chosen to present themselves.

Usually, people in their teens are stuck in this phase but this is also true for those who were brought up by narcissists. The former is more self-obsessed but the latter are too prone to self-criticism.

Related: 10 Mind-Bending Optical Illusions That Will Help Reveal Secrets About Your Personality

Letting go of the athletic stage, people generally move to the phase of the warrior.
There is more maturity in this phase as they learn that they are responsible for the consequences of their own actions and also recognize their responsibility to the people around them.

The above symbol for the warrior phase of life signifies the beginning of learning.
We learn to apply the knowledge we have been privileged to receive and use it to better ourselves and the world around us. Some of the lessons might be harsh but they are necessary all the same.

Success, ambitions, and the drive to fulfill one’s goals also characterize this phase.
It is not called the warrior phase for anything as we learn to become fighters in every sense of the word. We begin to narrow down on our purpose on this planet and on the ways and means of achieving that purpose.

Slowly our plans for the future begin to crystallize and we experience great personal growth. The motivation required to push yourself harder to see those plans come to light is also found in this stage and the wisdom you learn will be invaluable later on.