Suicide Is Never The Answer: 6 Things To Know When Ending Life Seems Like The Best Option 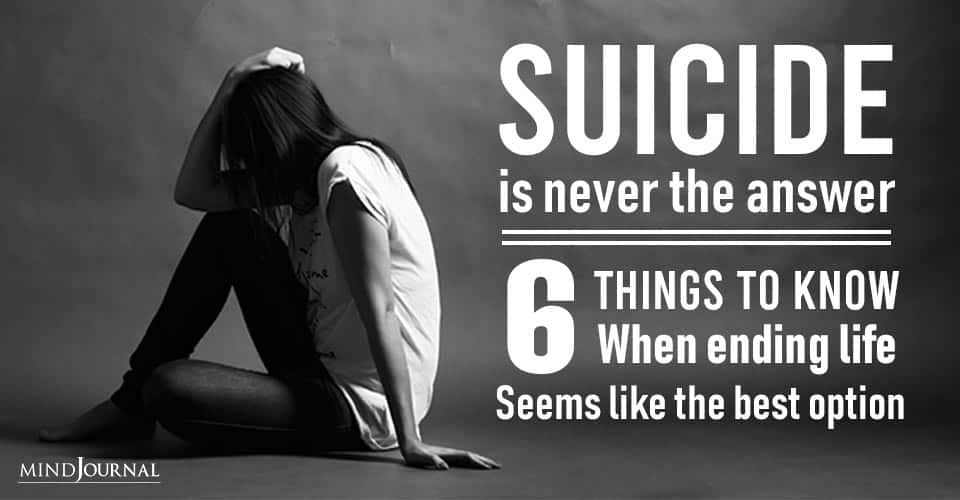 What to do if you’re thinking about how to commit suicide? What you should know about Suicide BEFORE it’s too late!

While some spiritual teachers have presented suicide as a painless exit strategy or an instant cure for pain and suffering, there’s something very important they’re not telling you!

In fact, if you’re seeking long term relief to pain and suffering or you’re looking for an easy way out, there are 6 things you need to know about suicide before it’s too late!

6 reasons why Suicide Is Never The Answer

1. Suicide Results in a Psychedelic State!

Whether drug-induced or death-induced, psychedelic experiences often intensify our state of mind, and while unresolved issues and unhealed wounds are magnified, our most dreaded feelings surface (fear, loneliness, regret and even paranoia, etc…). Therefore, suicide could catapult us into a dark and difficult psychedelic state, and this could mean that we feel all the negative emotions that precipitate suicide more intensely on the other side!

Worse yet, while the psychedelic effects of plant medicines metabolize within a few hours, the effects of a suicidal death don’t wear off so quickly.

So, rather than providing immediate or permanent relief, as some spiritual myths might promise, suicide could intensify the exact pain and suffering we’re trying to escape, and therefore, things could get significantly darker before there’s any sign of light.

According to people who have come back from Near-Death Experiences (NDE), we all experience a life review upon passing. During a life review, we experience the emotional ripple of all our actions, and regardless of whether our choices were conscious or unconscious, we feel all the positive and negative emotions that we caused others. Of course, this means that if our death is due to suicide, we feel all the intense pain and suffering of those we left behind.

The act of suicide is not the real issue here, and in fact, if you took your own life when you were joyful, there might not be any negative consequences. But, of course, people don’t usually kill themselves when they’re living joyful and fulfilling lives. Instead, people who kill themselves do so when they’re at the depths of desperation and despair, and consequently, they take these negative emotions with them.

You see, we’re all carried on a river of emotion that runs through life and death, and while our dominant emotions create a specific vibration, that vibration dictates our fate well beyond the grave. This is why you should not commit suicide, else your mistake will torture you after death as well.

Since the vibration in which we cross-over determines “what happens next,” the negative emotions underlying the act of suicide could propel us into our own worst nightmare….and if this occurs, we must somehow find our way out.

Related: To The Friend, I Lost to Suicide

According to the Universal Law, “As Above So Below,” the afterlife mirrors this world, and this would also mean that the well-known “Law of Attraction” doesn’t end with death. So, although we’ve been led to believe that death immediately ends all earthly suffering, if we cross-over with negative energy/emotions, our negativity inevitably attracts more negativity in the afterlife.

Furthermore, if we cross-over in the depths of despair, we could attract any number of dark entities who prey upon the lost, lonely and depressed. While these entities are cleverly disguised as light beings or spiritual guides, we could be easily fooled, and since they feed off negative energy, we could unknowingly become their human batteries (aka the fuel for dark souls). Additionally, if we get enrolled into one of their negative agendas, it could take a very long time to find our way out!