Excuse me, Does anyone here speak narcissist? 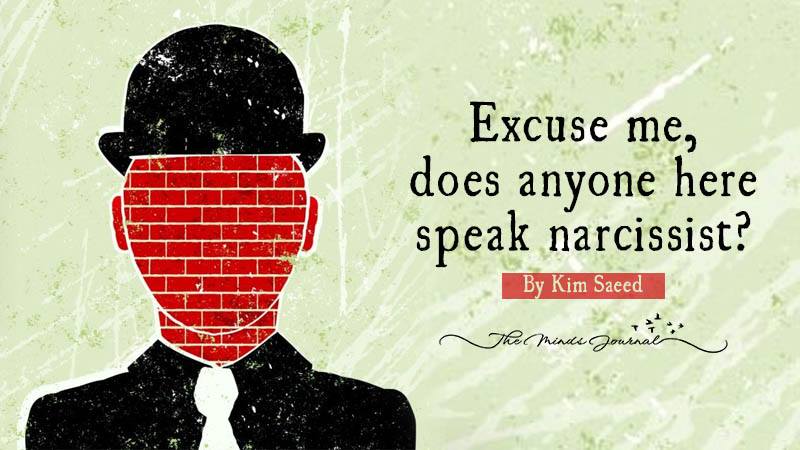 We may not realize it, but the words that we speak in our native language are full of personal memories, imagery, feelings, and associations that we have built up over the course of a lifetime.

We naturally assume others also share these associations when we are communicating with them and especially when they are communicating with us. However, when  learning a  foreign language this dynamic changes dramatically. We  no longer has a database of emotions to attach to the new sounds we are learning. So, we have to use a type of logic instead.

We know that if we make a series of foreign sounds that the other person will understand these sounds to mean something, and although emotionally it means absolutely nothing to us, to them it has the desired impact.

Eventually we attach emotions to the new words and we gradually become fluent.

It was only through speaking with narcissists in foreign languages that I discovered that when it came to emotions, they were foreigners in their own language. As soon as it came to speaking about emotions in any way, their speaking style visibly changed. As a foreigner I could clearly see that they were resorting to stock phrases which they could apply to anyone indiscriminately,  copying what others say, and either appearing exaggerated in praise or not responding appropriately and all in a way that appeared to be invisible to the people around them, or at least overlooked. They were totally unable to judge how to apply positive emotions correctly linguistically. It became perfectly evident to me as a  linguist that they had never developed any emotional database to accompany the words that came out of their mouths, they were repeated by rote.

So, when speaking about emotions with a narcissist it is important to remember that to them, they are just foreign sounds that they hope will have the desired impact.   Because when it comes to emotions the database is totally empty.

Read Narcissistic Personality Disorder: Who Is A Narcissist And What Makes One

Kim Saeed is the author of the Amazon best-selling book, How to Do No Contact Like a Boss!, as well as her free eBook, 10 Essential Survivor Secrets to Liberate Yourself from Narcissistic Abuse.  In 2013, she founded Let Me Reach, which is an education company that teaches people to heal and thrive who are contemplating, moving through, or moving on after No Contact.

8 thoughts on “Excuse me, Does anyone here speak narcissist?”