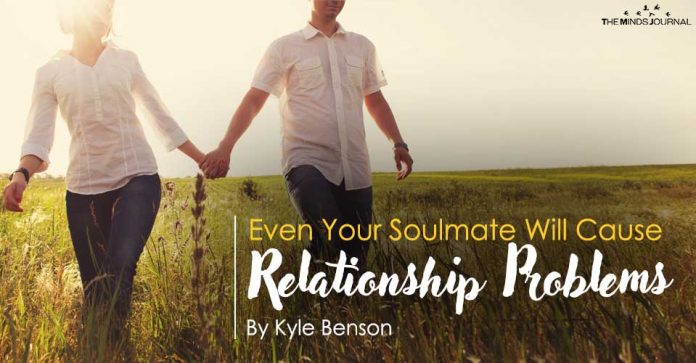 Even Your Soulmate Will Cause Relationship Problems

Soulmate Relationship Problems: Anyone who finds themselves in a dysfunctional relationship will either try to make their soulmate “perfect” by changing them or try to change themselves to be the “perfect” partner.

With that said, whoever you choose to love, realize that you are also choosing to love a set of problems. There are no problem-free candidates.

Problems are a part of any relationship, and you will have some sort of problems no matter who you love.

Lacey married Andrew, who tends to be a tad loud at parties. Lacey, who is shy, hates that.

But if Andrew had married Molly, he and Molly would have gotten into a fight before they even got to the party. That’s because Andrew is always late and Molly hates to be kept waiting. If someone is late, Molly feels taken for granted; something in her childhood made her sensitive about that. If Molly were to confront Andrew on being late, Andrew would have believed her complaining was an attempt to dominate him. That’s something he gets upset over rather quickly.

If Andrew had married Leah, they wouldn’t have even made it to the party, because they would be fighting about Andrew’s lack of help with the housework. This makes Leah feel abandoned, something that makes her stomach queasy. And Andrew would have seen Leah’s complaining as an attempt to dominate him.

Solvable conflicts can be as simple as setting up a relationship ritual such as a five-minute coffee chat to feel more emotionally connected. Solvable conflicts reach a resolution and rarely get brought up again.

Meet John Gottman. He is the Muhammad Ali of relationships. During 40+ years of research on happily married couples, John was able to create a combo of techniques that produced a ridiculous 90% knockout rate in predicting whether couples would divorce within 10 years or not.

His heavyweight title showed that the happiest couples have persistent unresolved conflicts.

In each one of John’s books, he points out this: The idea that couples must resolve all their problems is a fairytale.

According to John Gottman, couples disagree on unsolvable never-ending issues 69% of the time.

These perpetual conflicts are a byproduct of the fundamental differences between soulmates. Differences in personalities, needs, and expectations that are fundamental to their core definitions of self.

Despite how much we want the problems to go away, they never will.

If couples cannot start talking about the unsolvable problem in a healthy way, the conflict may make the relationship emotionally clogged.  Unable to drain the tension between soulmates.

The topic of the conflict doesn’t matter in terms of knowing if the problem clogs the relationship or not. It can be about anything. To an outsider, it may seem like a very small issue, like not vacuuming the house. But within the relationship, it feels like a monster in the closet; too scary to open up.

Finally someone admids it… TY

There are some couples out there whose relationship doesn’t have any romance in it at all or the romance has decayed over time. Are you one of them?
Read more
wpDiscuz
4
0
Would love your thoughts, please comment.x
()
x
| Reply