The Dangers of Sitting: 12 Health Risks Of Sitting All Day Backed By Science 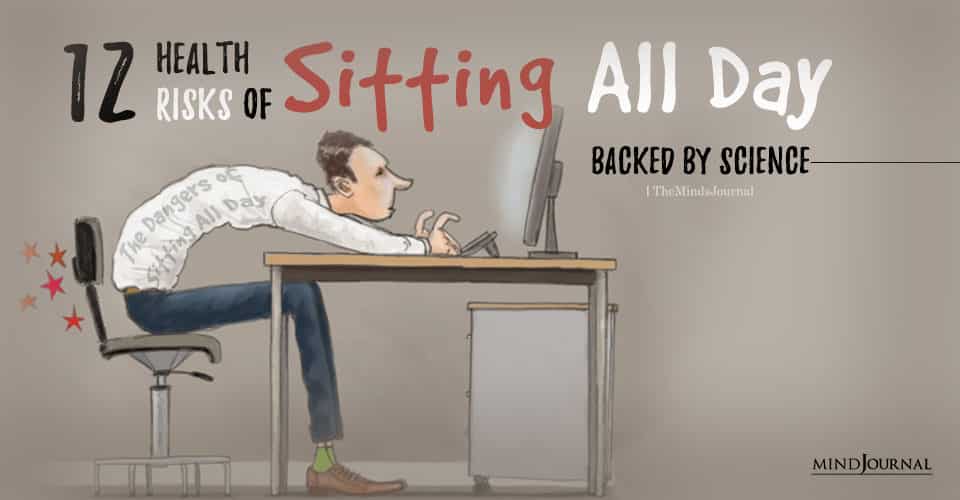 Not just smoking but sitting is equally injurious to health, according to doctors. Read on to know the dangers of sitting and twelve things that can happen to you when sitting too long at desk.

Did you know that when they were invented, the remote control was called ‘Lazybones’? Because it was designed for a demographic that wanted to switch the channels without getting up from their seat?

Man has had, till now, an interesting evolutionary history. He has outlived predators many, many times his size and strength, and killed and eaten prey that could simply trample him. He has forced the soil to grow things and stopped rivers.

All thanks to one simple thing, if you think about it.
His laziness.
Yes, I said it.
Man has always been either scared or lazy or both.

Hence the phrase, do it better. Which literally means, let it get done on its own while I take my siesta. Today, the story might seem different but the biological impact really isn’t.

Today we live in the age of the corporation, huge conglomerates that have their tentacles in every hole imaginable. There’s a lot of cash involved, obviously and a lot of manpower.
Five-day work-week, each ten gruelling hours long.
Yes. True. I hear you. Amen.

But, it was ten hours of sitting wasn’t it? In most cases, in an air-conditioned white room was it not?
Think about it. How many hours do you actually spend walking or roaming or even standing?
Most of you must be feeling pretty guilty by now, aren’t you?
Well, let’s take this a notch higher.

Do you know the dangers of sitting?

According to the Annals of internal medicine, an average American man spends more than half of his waking hours in an inert state. Ironically enough, even our catchphrase for sex is ‘Netflix and chill’. Goes to show you the depth of the issue at hand.

The number of things you can do to your body by sitting all day long is a long one. We will limit this to the nastiest ones.
If you are REALLY lucky you will get away with chronic backache, maybe spondylitis or spine pain. If not, and God helps you if that happens, you will contract obesity, pressure fluctuations, diabetes and of course, heart conditions.

(Detailed Infographic at the end of the article)

Thsi is the most common health risks associated with sitting all day. Our body works on a principle of negative feedback. If there is usage, an organ will grow larger and larger. For example, there are cases where babies are born with one kidney which proliferates and takes on the capacity of two kidneys.

For organs that don’t see much use, there is disintegration. For example, the appendix. Same when we work out. Our muscles increase because there is increased blood flow and nutrients reach where they must.

When you do not use a large majority of your awake time on a chair or on a bed, you are depriving a number of your major muscles their fair amount of work. Now there might not be a factory strike, but there will be a conflict: ACHE. It can start in your legs, or your back or even your head. And it won’t go easily. That is the red flag right there: pain that doesn’t go away easy.

Your neck is the next to succumb because it gets too much of work. Your posture deteriorates rapidly causing it further distress and God forbid if you slump, slouch, walk with a hunch or carry a big bag every day to work and back.

Your knees particularly, have a disk called a patella which helps move them. Similar disks are found in other parts of your body too. Joints need them to help in movement. When you get up from your chair after a long day at work, you hear cracking noises up your spine and in your knees, don’t you?

It’s these disks getting back into position.