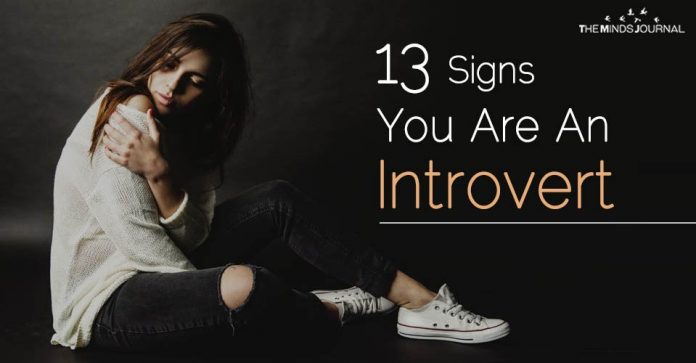 13 Signs You Are An Introvert

Too often people confuse someone who is shy with someone who is an introvert. While shy people find it difficult to open up to other people, introverts, on the other hand, choose to stay away from people. They’re not scared or easily embarrassed — as is sometimes thought, but prefer being with their near and dear ones and talking only to a select few.

Introverts don’t hate talking, but they do hate conversation that feels purposeless. Introverts are happy to skip the surface stuff like where you’re from and get to the real meat of things like discussions about which book character would win in a battle.

2. You avoid the crowds.

You don’t like being a part of a huge crowd or a social gathering. You avoid parties because they’re packed with people you don’t know. You easily get annoyed with such places because you think they stress you out.

If you can’t remember the last time you were legitimately bored, chances are, you’re probably an introvert. You don’t need other people to have fun, you always can think of something great to do because you find good company in yourself. Even if you’re doing absolutely nothing, your mind is always busy thinking thoughts.

4. You aren’t too keen on meeting new people.

You’re not very excited to meet new people. In a social gathering, you don’t make an effort to talk to or know someone else better. You aren’t rude or shy, but you just don’t see the necessity of striking a conversation with new people.

5. You love your alone time.

You love to spend time by yourself. You don’t get bored, as you’re always up to something fun and exciting (for you, at least). You focus on your interests and hobbies much more than spending time with people and visiting new places.

6. You prefer deeper relationships to superficial ones.

You believe in building deeper relationships with a select few rather than trying to make many acquaintances. You feel like interacting with smaller groups fosters a more meaningful relationship.

7. You’re better at writing than speaking

It’s easier for you to convey your thoughts and feelings when you can write them down rather than when you have to speak them out loud. What happened to the art of letter writing anyways?

It can be hard for introverts to find someone who will respect their introverted nature, and so it takes more time for them to open up. On the other hand, it means that your friends will be people you can really count on.

When it comes to being around friends, you are social and talkative. Also, when you’re in your interest groups or among people who share similar interests, you’re quite chatty, to the extent that others could think you’re an extrovert.

10. You enjoy listening to people talk.

You’re a good listener, and you enjoy having conversations with people. You don’t shy away from giving your opinion. But, you do, however, like to move away from the center stage and prefer to shift the focus onto the other person.

You don’t like getting into an argument with other people. You think it’s a waste of time. You’d rather try to bring peace and stay away from heated discussions, especially with strangers and acquaintances, than to expend your energy

12. You’re great at speeches, but not great afterwards

If you want to truly care for your introvert you have to start by understanding who they are inside and what motivates them to behave and act in the way they do.
Read more
wpDiscuz
14
0
Would love your thoughts, please comment.x
()
x
| Reply