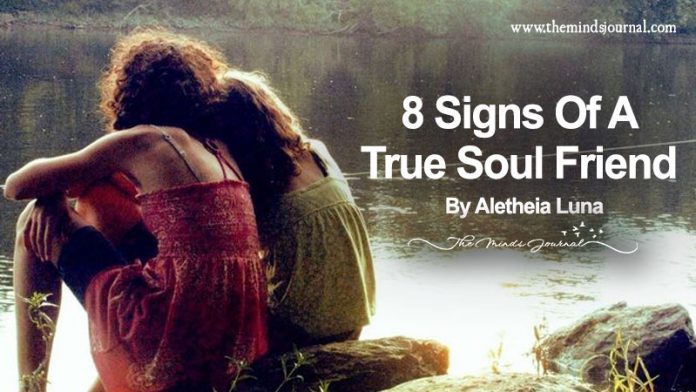 8 Signs Of A True Soul Friend

A true friend is one soul in two bodies. – Aristotle

What do you define as a “friend”?

Take a moment to think about your answer.

Once upon a time people described true friendship as a connection between two fiercely loyal people who would give their lives for each other’s well-being.

A true friend used to be thought of as a person who would stick with us through thick and thin; an alter-ego of sorts who we could confide in about anything and everything, and trust completely.

These days the meaning of friendship has been somewhat diminished as we assign our drinking buddies, neighbors, colleagues and acquaintances with the “friendship” status (don’t get me wrong, some of these people can be true friends, but usually not).

We even reward the strangers and distant associates on our social networking account “friend lists” with the devalued title, as though the word “friend” is nothing more than a worthless, futile word that can be tossed around and pinned onto anyone with a face.

While it is great that we are open enough to assign anyone in our lives as “friends,” our ignorance of what a true friend is and what being a true friend means contributes to a great sense of isolation and loneliness in our lives.

We have even turned “friend” into doublespeak with the modern word “for enemy” being used a way of describing people who you are friendly with (like with a friend), but secretly dislike (like with an enemy).

More than ever the importance of making and learning how to be a true soul friend is a vital part of life satisfaction in our increasingly disconnected society. I hope to explore this a bit more with you today.

FINDING AND BEING A TRUE SOUL FRIEND

Sociologist and psychologist Lillian Rubin conducted an intriguing study that was published in her book, “Just Friends: The Role of Friendship in Our Lives” back in the 1980’s which was created to discover whether people reciprocally identified each other as “best friends,” or not.

In this study, 132 people were asked to write down the name of one person within the group who they identified as their best friend.

What implications does this study have on our lives?

The reality is that our perceptions of “friendship” have weakened so much that most of us – as revealed by this study – struggle to even identify our mutual close friends.

To me friendship is one of the most pure forms of love among humans because it (rarely) receives any form of sexual or monetary gratification/compensation; just the joy of connecting deeply with another.

Perhaps this is why we love and worship our pets so much?

They often provide the only form of true soul friendship we can find immediately in our lives. The love of a pet is an unconditional love.

Can you say the same for yourself or for others?

Asking myself this question often makes me stop dead in my tracks as I come to face all of the conditions that I tend to impose on others that stymies a true soul friendship. And honestly while this shocks and deeply grieves me, I see it as an opportunity to grow – and I hope you can grow with me as well.

Fortunately, I have found a couple of true soul friends in my own lifetime which have taught me a lot about the meaning of unconditional love.

This is what I have learned:

1. YOU CAN TALK WITH A SOUL FRIEND ABOUT ANYTHING.

There is no need to hide any topic away or “walk on eggshells” when talking with a soul friend. Although they might have their own contrary opinions, you can nevertheless feel a refreshing sense of liberty and openness when talking with them.

2. THEIR CRITICISM IS CONSTRUCTIVE, NOT DESTRUCTIVE.

A soul friend wants to help you grow and build you up rather than tear you down … because why would they want to see you suffer?

They don’t get any benefit from it. For this reason, a soul friend is transparent and forthcoming with their critiques, and doesn’t resort to passive-aggression, bitchiness, or pretense. They trust in the friendship enough to know that an embarrassing revelation won’t toss the connection onto the rocks.

Optimistic women blindly hope that their toxic relationship will become perfect one day. Optimism makes it difficult for them to leave the relationship.
Read more
wpDiscuz
20
0
Would love your thoughts, please comment.x
()
x
| Reply