Signs Of A Toxic Marriage That Seem Normal But Are Not 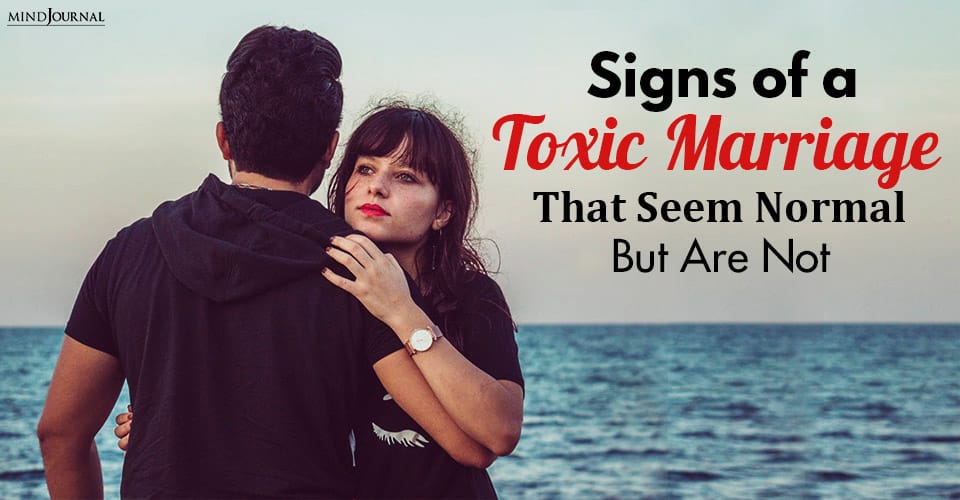 Sometimes, you might notice signs in your marriage that will seem normal on the surface. But in reality, those signs are pointing to the fact that you are in a toxic marriage.

Do you look around at other marriages, feeling like your marriage is just like theirs, and yet you wake up every morning unhappy and spend your days wondering what is wrong with you that you are feeling this way?

When we get married, no one gives us a guidebook. There are no step-by-step instructions as to how to make things work, to be married successfully.

Instead we are thrown into something that we have never done before, expected to have all the answers and to live happily ever after.

It’s no surprise that you find yourself in this place, wondering if you are in a toxic marriage but just not really sure.

There are signs of a toxic marriage that seem normal but that really are not.

Contempt is defined as ‘the feeling that a person is beneath consideration, worthless or deserving scorn.’ Signs of contempt include eye-rolling, unkind words, sarcasm, and dismissal.

Contempt can be hard to recognize because it’s easily explained away. Oh, I deserved that or he is just crabby or he was just showing off for his friends are excuses that are often used to justified contempt.

Think about your interactions with your husband. Is there contempt? Do one or the other, or both, of you speak to each other sarcastically? Do you talk behind each other’s backs? Do you roll your eyes when your partner tries to make a point?

The number one sign of a toxic marriage is contempt. When people treat each other contemptuously the respect in the relationship is gone. And without respect, nothing else matters.

Fighting in a marriage is totally normal. There is no way that two people can live together for years and years without issues arising that lead to quarreling.

Do you and your partner fight regularly? Do you fight about everything from the color of the sky to the time it takes to make dinner?

Do your fights escalate quickly? Do you attack each other personally? Is there never resolution around these fights, you just retreat to your respective corners and sulk?

If the above describes the way your fights evolve then you are most likely in a toxic marriage. People who not only can’t agree about anything but who treat each other so horribly in a fight are definitely in a marriage that is unhealthy.

When I was married, there were many secrets that I kept from my husband. I didn’t talk to him about how I felt about him.

I didn’t vaccinate my son until he was 5 years old and neglected to tell him. I forgot to pay the cable bill for three months and then acted shocked when it was cut off. I hated the way he wore short sleeve shirts to work in the summer. None of these things I told him.

Furthermore, I spent a TON of time telling my friends the things that I didn’t tell him.

They especially knew how brutally unhappy I was with him and they were part of my decision to not vaccinate my kids. In many ways, my friends were a substitute for my husband.