4 Marriage Myths That Cause Divorce 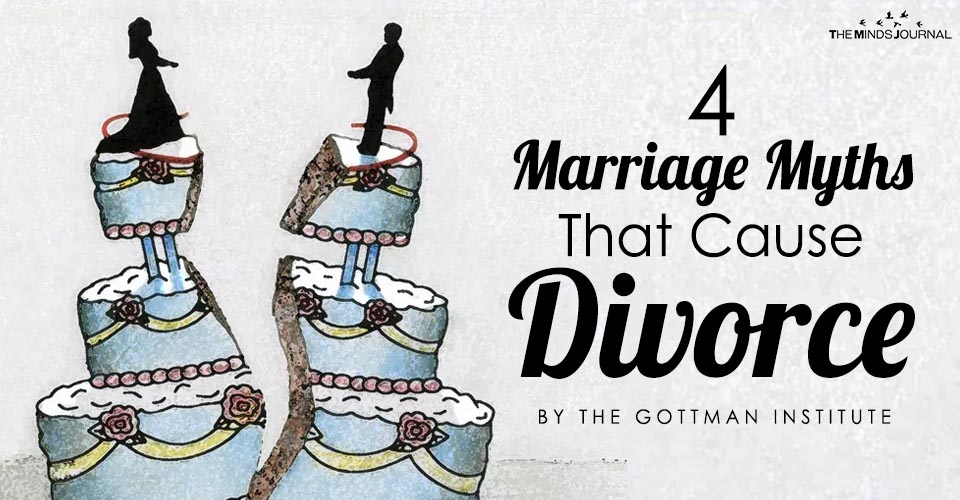 Unfolding the Marriage myths that cause Divorce.

As soon as the engagement ring is slipped on, we are inundated with messages about how our relationship should be. Our friends and family tell us what we should tolerate and what we shouldn’t.

What you believe about your relationship determines the relationship you end up with, and some of these common beliefs can be toxic.

They lead couples down the wrong path, or worse, convince them that their marriage is hopelessly going to go up in flames.

These myths ruin countless healthy relationships just because a couple believes there is something fundamentally wrong about it.

According to Dr. John Gottman, active listening and conflict resolution in marriage don’t work. The research has shown that even after using active-listening techniques, couples were still distressed. The few couples who did benefit relapsed within a year.

Active listening requires Olympic-gold-medal-emotional performances. The idea expects you to swim in a pool of emotional criticism next to Michael Phelps.

Even though Susan may do her best to hear Steve’s complaints, the person he is whining about isn’t a spectator in their marriage – it’s her husband – and behind all those “I” statements is her!

It’s not that validation, active listening, and “I statements” are useless. Dr. Gottman uses a modified version in his conflict blueprint, but the myth that all you need to do is to “fight better” or less frequently to save your marriage just isn’t scientifically proven.

If you want to learn how to listen to each other and dialogue about your problems, then check out The Seven Principles For Making Marriage Work.

2. Marriages Are Ruined By Personality Flaws

Every single one of us has baggage we’re not rational about. Tom Bradbury of UCLA calls these “enduring vulnerabilities.”

For instance, Lacey struggles with authority. She hates bosses. That’s why she runs her own company. If she were married to a controlling partner, the marriage would be World War III. Lucky for us, she is married to Tom who treats her like an equal and doesn’t try to control her.

Whereas Ashley has a fear of being abandoned.

Her husband Jake reinforces this by flirting with any cutie that walks by, even though he is devoted to their marriage. When Ashley tells him how much this bothers her, Jake laughs. He tells her it’s harmless, and he tells her to get over it.

Ashley can’t just “get over” the threat of abandonment, so Jake’s unwillingness to stop eventually drives them apart, ending in divorce.

It’s not that personality flaws or vulnerabilities ruin marriages. It’s how we choose to deal with them in the relationship that determines if it will last.

All of us are imperfect. The trick to making a marriage last requires both partners to tolerate each other’s “crazy” side. We must learn how to handle our partner’s vulnerabilities with care, affection, and respect.

Note: There are situations, like severe mental illness, addictions, clinical depression, phobias, and PTSD that require the support of a knowledgeable and experienced mental health professional.

Some therapists and relationship coaches will tell you that good marriages require a reciprocal nature. “You scratch my back, I scratch yours.”

“You help out with vacuuming the house, I’ll help out by taking out the trash.” This requires couples to function with an unwritten agreement to offer something in return for each kind of word or deed.

Keeping a running tally of who has done what for whom is actually a sign of trouble in a marriage. Unloading the dishwasher as payment because the other cooked doesn’t make a couple happy.

Happy marriages are about positive feelings, not a perfect 50/50 split.

In toxic marriages, this unspoken contract is full of anger and resentment. When a couple writes up a “contract” of who does what, it’s no longer about unconditional love and supporting each other. It’s about keeping score.

There will be times in your marriage where you will have to do more than your fair share for a while. Maybe your wife is going back to school, or your husband is preparing for a business meeting that could give him a big promotion.

Usually they’ll do the same for you when your challenges come. It’s not about being equal in everything, it’s about loving each other and working with each other to make things work. And sometimes it won’t feel fair.

If you feel like things have been unfair for a while, don’t hold it in. Go to your partner and tell them that you feel like you’re doing a lot and would feel better if they could help you out with some of the things that need to be done. No scorecard needed.

4. Sex Stops Once You Get Married

It’s believed sex is a well that dries up after a few years into the marriage. The problem isn’t this myth – it’s the belief that it’s normal to stop having sex or being intimate. When sex and intimacy stops in a relationship, it’s a sign that both partners need growth to occur.

In David Schnarch’s book The Passionate Marriage, he argues that our sexuality isn’t in its prime when we are teenagers or college students. To him, our sexuality doesn’t mature until well into our 40’s and 50’s.

With time comes wisdom. Marriage offers you the biggest growing machine there is. The time with your partner allows you to explore your deepest desires with someone you trust. It allows you to experience new ways of loving each other.

Your marriage gives you a foundation to face the anxiety of growing, so you can embody your full sexual potential.

Studies show that couples in long-term relationships have more sex than their single counterparts.

So when the spontaneous passion stops in the bedroom, don’t leave things up to chance. If you want your sex life to be amazing, work at it.

What other myths about marriage have you been told?

Let us know in the comments below.

Know the Myths about the marriage that leads to divorce.

1 thought on “4 Marriage Myths That Cause Divorce”

Staying in a bad marriage for your kids is not the noble decision you believe it to be. Witnessing an unhealthy relationship between you and your spouse and seeing your toxic marriage up close can cause even more damage than divorce in the long run.

Attitudes toward divorce are changing. When I was a kid, divorced parents were given the evil eye. Heads shook, tongues clicked; divorcees were homewreckers, selfish and unloving, they destroyed children’s lives. Some churches banned them from services—apparently, even God wasn’t a fan.

The message to married couples: Keep your marriage intact by any means necessary.

Times have changed; today, nearly half of all marriages in the U.S. end in divorce. Whether divorce hurts or helps children depends on how it is handled by their

5 Ways To Rebuild Your Life After Divorce

Divorce is a difficult process that takes a mental toll, however, if you want to rebuild your life after divorce, here are active steps for moving on in life and healing.

Are you wondering how to get your life together after divorce?

Is the life that you once led, the one that you knew so well, suddenly completely gone and do you have no idea what to do next?

After divorce, life can feel unsettling, unfair, and full of fear of the future. During the time you were going through legal proceedings whether, through the courts or mediation, you probably didn’t have time to think or fully process the implications for your future.

When you find yourself in the aftermath of the finality of it all, life can feel empty and dark.

I remember feeling a new level of grief after my divorce was final and I had to move with my young daughter from my home of 10 years. It was a time of confusion, fear, and more grief.

Coping with the end of a long term marriage is never easy. How do you move on from the person and the relationship that has been such a huge part of your life for so many years? It's hard, so so hard.

My initial response is the same way you get over any loss. You must process your emotions and go through the grief cycle.

I can tell you from watching my mom navigate after the ending of her 28-year marriage to my dad, that by not processing her emotions in a healthy way, she stayed stuck for a long time in an endless loop of fear-grief-anger.

My marriage lasted only 7 years. I remember crying to my mom that I recreated the sa