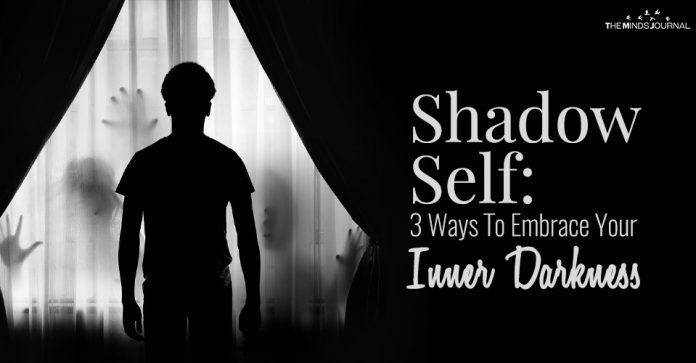 What we call civilized consciousness has steadily separated itself from the basic instincts. But these instincts have not disappeared. They have merely lost their contact with our consciousness and are thus forced to assert themselves in an indirect fashion. This may be by means of physical symptoms in the case of a neurosis, or by means of incidents of various kinds, or by unaccountable moods, unexpected forgetfulness, or mistakes in speech… a modern man protects himself against seeing his own split state by a system of compartments. Certain areas of outer life and of his own behavior are kept, as it were, in separate drawers and are never confronted with one another.

Thus, the dark shadow traits that we all possess accumulate in the corners of our unconscious minds, never becoming adequately integrated into our conscious minds because we never see our split state in the first place (due to our psychological defense mechanisms). And so we continue on accumulating these dark desires, motivations, and fears.

This lack of awareness of the Shadow Self – and the disconnection from our true Whole self – can be dangerous.

Through observing many of our inner work students, for example, I’ve come across certain individuals who have allowed their Shadow Selves to accumulate for so long that they’ve erupted and overpowered the person through depression or an unconscious accident that ended up manifesting their inner demons. The denial of the Shadow can lead to physical, emotional, psychological, and interpersonal consequences that last for a very long time.

Repression of the Shadow Self

It’s understandable that the process of becoming civilized requires us to repress aspects of ourselves that do not fit in with the structured ideal of our society. However, it comes at a great cost to us. We are born whole and complete, but we slowly learn to live fractioned lives, accepting some parts of our nature but rejecting and ignoring other parts.

A holiday to a different part of the world will show you how arbitrary some of these “good/bad” divisions are (that create the Shadow Self). In the West, for example, eye contact is perceived as confident and engaging, whereas in Japan it’s perceived as arrogant and rude. In the Middle East burping after a meal is a sign of pleasure, yet anywhere else in the world it’s seen as vulgar and uncouth. And in America, TV shows depicting violent murders are considered more acceptable than showing nudity or sexual acts, whereas in Europe it’s the complete opposite. These are just a few examples.

Basically, the repression of our negative traits or emotions in society is one of the biggest barriers in any person’s journey towards self-love and living authentically. How can you completely and wholeheartedly accept who you are if there are sides of yourself that you’re too afraid to explore?

Don’t get me wrong, the idea of the “Shadow Self” doesn’t only apply to psychology. Many ancient Shamanic teachings, including the ones I was taught, involved the preparation towards an illness or a spiritual death (by ascending into your own darkness or “Shadow Self”), and being reborn in an attempt to provide you with the experience and insight to heal yourself and bring that healing wisdom to the people of your tribe.

How Spirituality and Religions Contribute to the Repression of the Shadow

So, apart from society’s ideas of acceptable and non-acceptable behavior, what else causes such great repression of the Shadow Self? In truth, a lot of it actually comes from the endless cornucopia of “feel good” motivational teachings out there.

Understandably the “light” energies are usually represented with noble values such as love, peace, joy, harmony, and compassion. Many spiritual and religious movements completely ignore or condemn the darker elements such as anger, vengeance, control, fear, shame, competitiveness, jealousy, and lust. Because these darker characteristics are associated with negativity or “evil,” they’re avoided out of fear and buried even deeper within us. But this is a tragic mistake with dire consequences.

The more our darkness is avoided, the more it grows within us, waiting like a volcano to gush out at any unexpected moment.

The Importance of Integration (vs. Spiritual Bypassing)

Interestingly, many seekers of spiritual growth think that somehow all of the negative qualities within themselves will eventually be transcended as they “awaken to their Higher Selves,” “work through their karma,” or “become more enlightened.”