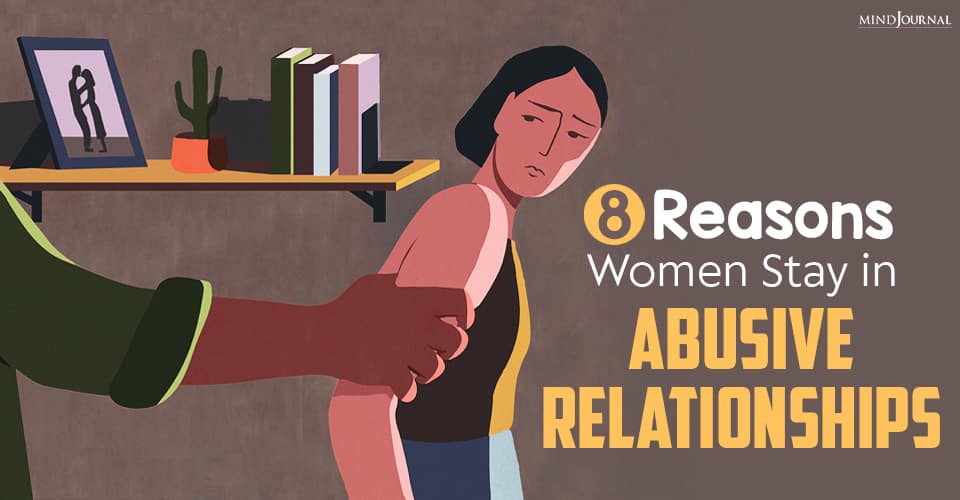 Many women are living in abusive relationships and suffering like hell. What’s the point? Why can’t they quit toxic relationships?
Research answers the question: “Why can’t she just leave?”

When NFL linebacker Ray Rice knocked his fiancée Janay Palmer unconscious in an elevator, it didn’t initially get much attention. He was accused of domestic violence and suspended for two games. After a few weeks, he was formally charged, but he and Palmer were married the next day.

However, when a security video of the event surfaced, it quickly went viral. Watching Palmer be knocked out and roughly dragged out of the elevator by Rice had a powerful effect on viewers. The waves of outrage that followed caused the NFL to scramble to increase their punishment of Ray Rice and conduct an internal review of their domestic violence policies.

Things took an interesting turn when Janay Palmer spoke out in defense of her husband. She apologized at a press conference, saying: “I deeply regret the role I played that night,” and later asked people to stop their judgments and accusations. “Just know we will continue to grow and show the world what real love is,” she posted on Instagram, asking others to not take anything from the man she loves.

This provoked a new public response. Incredulous observers could not understand how Palmer could be standing by her man. The attacks now turned toward her, with commenters questioning her sanity, innocence, and motives. Why would someone stay with—let alone defend—a man who had knocked her unconscious? What was Palmer experiencing that she would defend him?

These accusations and questions prompted a pushback. Victims and women’s advocates spoke out in defense of Palmer and described the complicated dilemmas women in violent relationships face. Beverly Gooden, a human resources manager in North Carolina, started a hashtag on Twitter, #WhyIStayed, where she shared her reasons for remaining in a violent marriage.

“I tried to leave the house once after an abusive episode, and he blocked me,” Gooden said, later adding: “I thought that love would conquer all.” Her hashtag became a rallying point, with hundreds of victims posting their stories of the factors that kept them in abusive relationships.

As domestic violence researchers, we were curious about how these posts could help professionals and public observers better understand the unique challenges victims of domestic violence face. With colleagues Jaclyn Cravens and Rola Aamar, I examined these voices to see what could be learned. We collected hundreds of posts from women all over the world and read, coded, and sorted them.

Through this analysis, we identified eight main reasons women stay in abusive relationships.

Being controlled and hurt is traumatizing and this leads to confusion, doubts, and self-blame. Perpetrators harass and accuse victims, which wears them down and causes despair and guilt. For example, women shared: “I believed I deserved it,” and, “I was ashamed, embarrassed, and blamed myself because I thought I triggered him.”

Others minimized the abuse as a way to cope with it, saying: “[I stayed] because I didn’t think that emotional and financial abuse was really abuse. Because words don’t leave bruises,’’ and, “Because I didn’t know what my boyfriend did to me was rape.”

Some of the unfortunate distortions are the damage to the self that results from degrading treatment. Many women felt beaten down and of no value, saying: “He made me believe I was worthless and alone,” and, “I felt I had done something wrong and I deserved it.”