Why It’s So Hard To Identify Maternal Sexual Abuse 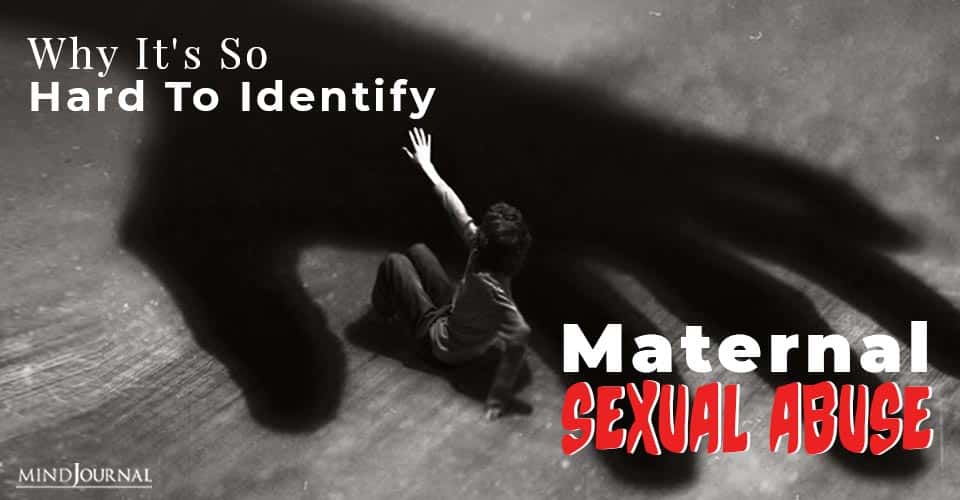 Not many people know about maternal sexual abuse and the ones that do tend to not take it very seriously, or simply dismiss it off as something impossible. The sad truth is, this kind of abuse exists, and many men go through this.

Mother-son incest is one of the most taboo topics and one of the most unthinkable. Despite society’s denial of its existence, though, it can happen. We idealize mothers and never want to envision them as sexually abusive, especially with their own offspring.

Hani Miletski, a psychotherapist and sexologist in private practice in Bethesda, Maryland, is the author of the book, Mother-Son Incest: The Unthinkable Broken Taboo Persists. I talked with her openly and honestly about this subject. Here is an excerpt from the podcast:

1. Why do you think this topic is so taboo?

Hani Miletski: The idea that a woman is a sexual abuser is hard for people to accept, first because women don’t have a penis. How much harm can they do? And women love their children, they’ll do anything for them – it is unthinkable that they would sexually abuse them.

2. Is there a difference between mothers and fathers sexually abusing their children?

HM: There are a lot of different ways to sexually molest children. But women have the advantage, so to speak. They use seduction. For example, sexual molestation can be disguised by the way mothers touch their children while bathing them. When their son reaches puberty, mothers can ask their son to help zip up a dress – that kind of thing. Or sleeping together in the same bed and cuddling.

HM: I agree. Kids get very confused because the mother supposedly is taking care of them, but it feels weird. It feels like something is wrong and they don’t know what’s going on, which makes it even worse.

4. Kids cannot put into words what is happening because they just don’t understand it. As therapists, we have to help them find the words, and that’s tricky.

HM: You also have to worry about not putting any ideas in their heads that were not there. You have to work on a very thin line.

HM: They think, ‘She loves me, she wouldn’t harm me, whatever she does, she does because that’s the way it’s supposed to be, even if it doesn’t feel good.’

6. Is there a kind of motherly love that crosses over into incest behavior?

HM: I think the crossing over is when the son begins to feel uncomfortable and the mother doesn’t care and doesn’t pay attention. For example, if a mother hugs her teenage son and he is squirming and doesn’t know what to do and obviously feels uncomfortable, that’s when the mother – the adult – has to say, ‘Okay, he doesn’t like it. I should back off. I shouldn’t do this anymore. At least for now, until he grows up and it’s okay to hug him again,’ or something along those lines.

I think it’s the responsibility of the mothers – the adults – to really pay attention and see when the kid is uncomfortable and act appropriately.

7. I think that mothers who have healthy maternal instincts would get that and catch themselves.

HM: That is the problem. Most of the women who are perpetrators of mother-son incest are women who are very needy, and they don’t think about anybody else. They don’t pay attention. I think in most cases, they don’t even do it on purpose. They’re just so needy. And they want their kids to hug them and they just need something.

Usually, there’s no partner around. The kid becomes the partner.

8. Could it also be that she too was sexually abused in some way?

HM: It’s possible. I don’t like to make that reference that everybody who was sexually abused ends up sexually abusing even though sometimes it does happen.

9. It’s like a correlation, not causation. People worry that if they were sexually abused, they will abuse their kids.

HM: That’s one of the reasons why a lot of men don’t come forward and don’t talk about it because they’re afraid that if people find out that they were sexually abused, they immediately will be accused of sexually abusing others.

10. You say the five misconceptions about mother-son incest include: mother-son incest means intercourse; boys cannot be victims of sexual abuse; no harm can be done without a penis; motherly love cannot be sexual, and one of the two must be crazy. Do you want to expand on any of those?

Read Child Sexual Abuse: 5 Reasons Why You Should Reveal It

11. What about the misconception that boys cannot be victims of sexual abuse?

It’s all these ideas that people have in their heads that don’t allow them to actually see what’s going on. And the boys can be very miserable because of that and they don’t even know why they are miserable, and if they did, they don’t know who to talk to about it. Then we have the misconception that motherly love cannot be sexual. Who can even fathom that mothers can do anything like that? It must not exist.

Want to know more about the sexual abuse faced by men? Check this video out below!

12. What kinds of ways do men manifest this, that they end up coming into your office?

HM: It can affect men in a lot of different ways, but I think mostly it is the way of having attachment issues. A lot of men end up being attracted to older women. They come to my office because they know something is not right. They want to have a relationship with somebody their age, but it doesn’t do it for them.

13. What about mothers cuddling in bed with their sons? At what age is this inappropriate?

HM: First, the mother has to be very mindful about how her son reacts. If the child is not comfortable, the mother should not do this. When the son reaches puberty and the hormones start going crazy and every thought or every touch gives the boy an erection, moms definitely want to stop cuddling or sleeping with their son.

The son correlates being with mom and having mom touch him with erections and sexual arousal. This just messes him up.

14. I’ve seen a forum in which hundreds of men talk about how they loved having sex with their mother, they loved what she did, and they continued it into their adulthood. What do you think?

HM: I have gotten a lot of emails from guys who were very upset about my book, because they said that what they had with their mother was love and it was a wonderful relationship and how dare I call it anything bad. I think it’s part of the denial. I think a lot of guys who have been in these situations have to explain it to themselves in some way so they can live with themselves.

Their mother loved them in ways that cannot be described. They had this special relationship that felt wonderful on a physical level, but emotionally I think it messed them up.

15. I think we have to make room for the fact that there are some people who do enjoy the mother-and-son sexual relationship and think it is special.

HM: My philosophy is that if somebody does not see what happened to them as abuse, I do not try to convince them of that. If their defense mechanism is working for them and it’s doing good, I’m not going to mess it up for them.

But if they come to me because they have problems because of that, then we have to accept what happened in order to move on. It can be so hard for a man to admit his mother sexually abused him. It may take years in therapy for him to even say anything about it unless he is coming in for that reason. It is deeply embedded and is very painful when it surfaces.

To hear this podcast in its entirety, click here.

previous12 Things You Should Forgive Yourself For
nextIf You Pass This Test, You Are A Psychopath! QUIZ