How To Respond Gracefully To Destructive Criticism: 6 Tips 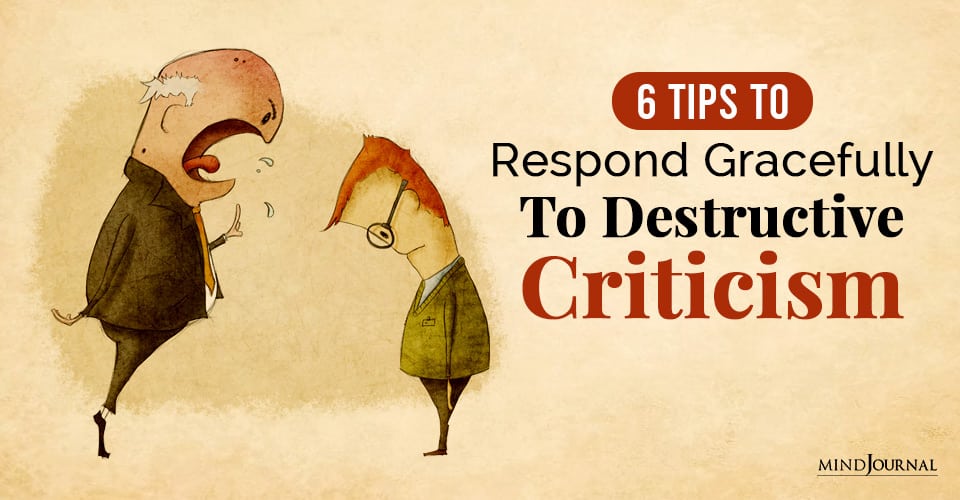 Your success depends on being able to take criticism in your life. Hence, it’s best to learn the skill of how to deal with negative criticism with grace and poise. Does destructive criticism affect you to a severe degree, which is why you have always felt the need to have thick skin, but are unable to do so?

Reacting to naysayers without compromising your self-worth.

If you’re someone who grapples with a harsh internal critic, you know how powerful that force can be. The good news is that with a bit of introspection and hard work, it is possible to change that voice, or at least learn to live peacefully with it.

But just as essential as taming your internal voice is protecting yourself from the potential harm of external critics. Being surrounded by those who don’t support you or often put you down can exacerbate your already punishing self-talk.

Since there will always be naysayers and backbiters, it’s best to learn to live with them or, as a beloved mentor of mine often says, become like Teflon and let their words bounce off of you.

Following are some ways you can begin to build that Teflon skin and learn to shield yourself from outside forces that threaten to exacerbate negative self-talk and undermine your sense of worth.

1. Sort the constructive from the destructive.

Unfortunately, today’s digital landscape has become an ideal platform for one cohort of critics—Internet trolls. These thorns in the side of humanity are prone to anonymity, likely out of a shameful awareness that their hurtful remarks are simply a reflection of their own lack of self-compassion. And whether your criticism comes from a troll or an acquaintance, keeping this factor in mind is essential.

And then there are the other, less anonymous critics, like those who smile to your face and then tear you down behind your back, or those who undermine you directly under the guise of “constructive criticism” or “just trying to help.” One clue that this is happening is if a comment is preceded by “No offense,” or “Not to rain on your parade, but….” When you hear these words, you can feel sure that your parade is about to be rained on.

Read Psychology Of Mean People And How To Deal With Them

2. Take a break from media—social and otherwise.

Whether it’s a fair-weather friend or the media trying to convince you that you’re not good enough, there will never be a shortage of critics to challenge your sense of worth.

“Low self-worth stems from multiple ecological causes,” says Dr. Anjhula Mya Bais. “A very critical upbringing coupled with a consumerist society that is built on destroying self-worth only to build it back through material goods are factors why individuals feel the way they do.”

It’s not hard to think of examples, from the onslaught of television ads telling us we’re not thin enough, pretty enough, or simply just not enough, to Eurocentric beauty standards represented in all forms of media. Bais suggests making room for open dialogue.

“Unpacking these various levels and discussing and describing them thoughtfully,” she says, “goes some way in beginning to sow the seeds for change.”

3. Be mindful, and notice when an insult is happening.

When someone says something hurtful, we may be so caught off guard that we don’t realize what’s happening until after we’ve had time to reflect, or until a friend (or therapist) points it out to us. The knee-jerk reaction in a moment of criticism or insult is often to believe them and question ourselves, when in fact we should be doing exactly the opposite.

The next time you find yourself questioning yourself based on another’s words, take a moment to breathe, allowing a space between the automatic reaction to take it in as truth.

Which brings us to the next point. . .

Read How to Stay Positive around Negative People