The Narcissist and Psychopath as Human Parasites: Are You a Host? 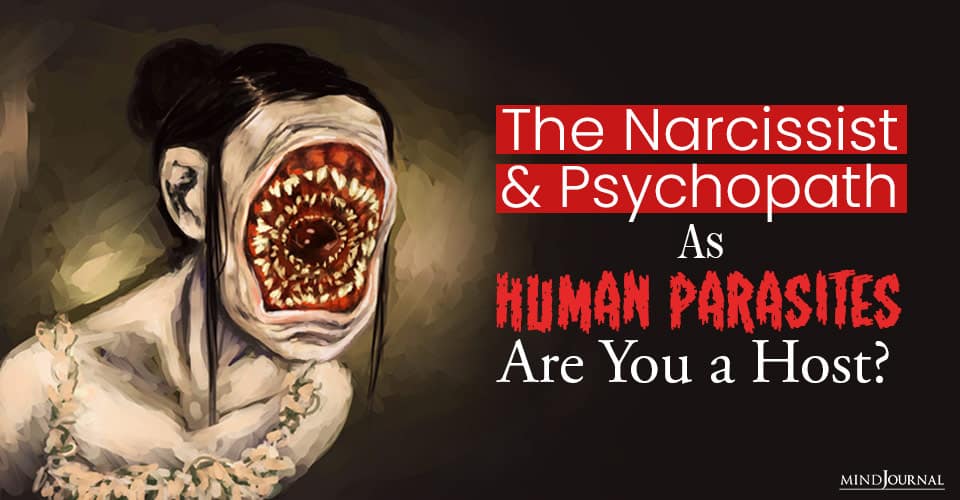 When it comes to narcissists and psychopaths, hardly anything good comes to mind; whatever you think of them, it’s always negative and poisonous. All they do is hurt people, exploit them and make their lives a living hell.

But after everything is said and done, there is one thing they do that makes them even more dangerous and some of the most dishonorable and unethical people out there. That is their tendency to live a parasitic lifestyle at the cost of their victims.

Now when it comes to being toxic, both psychopaths and narcissists more or less float in the same boat, but if you look a bit closer, you will see that there are a few elusive differences between the two. And the potential reason behind this is that they have different needs, and look to exploit their targets for different motives. Using other people for their personal agendas is a given, but their parasitic lifestyle aims to meet some very specifics needs in their minds.

What Does A Parasitic Lifestyle Really Mean?

Just like a parasite depends on a host for its survival, the same goes for a narcissist and psychopath too. They are notorious for exploiting others and feeding off them to fulfill their own personal needs. Narcissists and psychopaths are always looking for prey to feed on, and once they find the right people for this, they latch onto them with all their might, and gradually work towards sucking the life out of them to fulfill their own devious intentions.

Most of the time, such people tend to be the most attracted to empaths, and highly sensitive people, because of all the goodness, and kindness they have within them. Empaths and sensitive people make for an excellent source of narcissistic supply for toxic people. However, there are some differences between parasitic narcissists and parasitic psychopaths, and that’s because their core needs are different, and hence, their ways of hurting people are also different.

5 Reasons Parasitic Narcissists Are The Way They Are

Narcissists are extremely insecure people on the inside, who show themselves to be the most accomplished and best people on the outside. It’s all a facade to cover up their exceptionally high levels of inferiority complex.

They know they are low-vibration people, and their sense of self-worth is even lower, and that is why they always target innocent people who they can feed off of, and feel superior and good about themselves.

Related: Traits of a Narcissist and A Psychopath And What Makes Them Different From Each Other

If there’s one thing that narcissists just cannot survive without, it’s their constant need for attention. When a narcissist doesn’t get this, they wither like a flower without water. This is one of the biggest reasons why they always target empaths because empaths have a lot of love to give to others, and no matter what the narcissist does, an empath does not give up on them.

They get their ego stroked, their demands met, and all their wishes fulfilled; it’s a win-win situation for the narcissist, but an extremely degrading and painful one for the empath.

Another thing that narcissists just can’t survive without is their constant need for validation. Narcissists normally have disturbed and traumatic childhoods, which is the cause for the overwhelming sense of inferiority within them. In order to compensate for this painful reality, and not face it, they build an entirely different reality for themselves.

Now in order to keep on believing this delusional identity and reality, they crave constant validation. As long as they are getting this from their targets, they are happy and fulfilled, and this leads to their parasitic lifestyle becoming even more dominant and hard to get away from, from the perspective of their targets.