10 Obvious Signs You’re Being Lied To 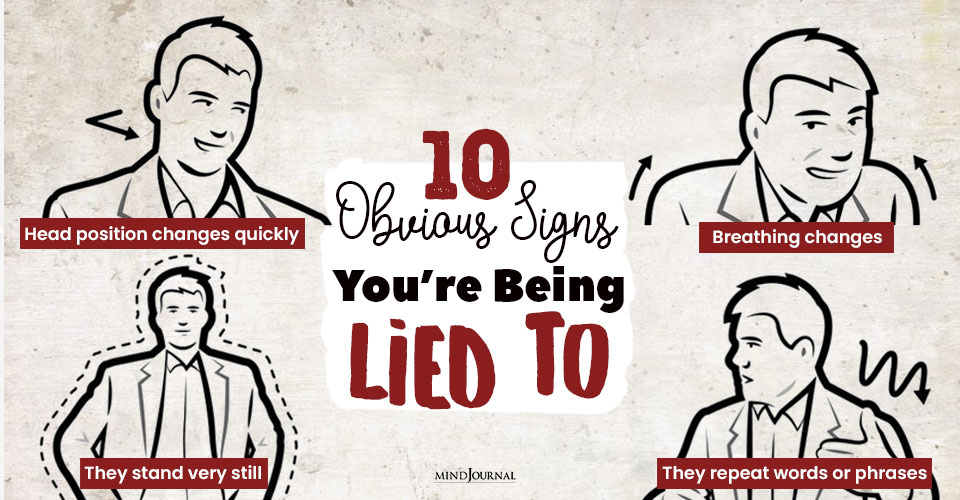 Deception is a sign of things that things may not be right in your relationship. Liars have a tendency to dupe their most trusted ones without even batting an eyelid. The master of deception can conceal the truth effectively but as a smart individual you can look out for a few obvious signs you are being lied to.

“People trust their eyes above all else – but most people see what they wish to see, or what they believe they should see; not what is really there” ― Zoë Marriott

10 Obvious Signs You Are Being Lied To

Avoiding eye contact makes a person a liar. The lack of eye contact would mean that the person you are connecting with is hiding something from you. If you hold the person’s gaze, but they are not, then the person is actually lying and is not trustworthy at all.

2. The way a person blinks.

One of the major signs you are being lied to is the rate of blinking. Very quick and very slow blinking will indicate that the speaker is not telling the truth.

There is a trust bias wherein people tend to believe other people more than not believing them. Language that implores into making the other believe is often a tool to dupe the others. Words such as “I swear to God” and “Seriously” can mean that a person is actually lying to you.

Chances are you are being lied to when a person speaks to you while crossing their arms over their chest. The body language often indicates that a person is hiding surreptitiously behind the guise of crossed arms.

Related: The Science Of Lying: 9 Things You Should Know About Liars

5. When exception words are not used.

Liars often use fewer words to distinguish what they do and what they do not. These often are about “except” or “but”, “guilty” and that could be more of negative emotion than feelings of actual emotions when they lie to you.

Those who lie often speak fast or sometimes slow. This clearly indicates they are trying to deceive you and manipulate you, into believing their version of the story.

7. When they divulge too many details.

This may sound very complicated, but one of the major signs of being lied to is giving a lot of unnecessary details, including details that are not relevant to the conversation even.

Giving paltry and unclear details is often an example of lies. If a person gives limited information, and that too in a very vague manner, then it indicates that they are trying to find a way to get themselves off the hook, but giving bare minimum information.

Related: How To Detect A Lie: 5 Simple Steps

There is often an “emotional leakage” in the face of a person when he or she talks. This is one of the most reliable signs someone is lying to you. Facial expressions often reveal truths about emotions that mask a lie. A smile with a downturned corner of the mouth indicates that the smile is not real.

Lies can often be read through body language and silence. You can yield significant results by investigating other, inconspicuous, and ‘harmless’ evidence to back your suspicions and get to the bottom of the truth.

Now that you know the major signs you are being lied to, you can easily call out someone’s bluff, and hold them accountable for their lies. Let us know your thoughts about this in the comments down below!

Want to know more about the signs you are being lied to? Check this video out below!

2 thoughts on “10 Obvious Signs You’re Being Lied To”