Narcissists and Sex – The Biggest Manipulation and Controlling Tool 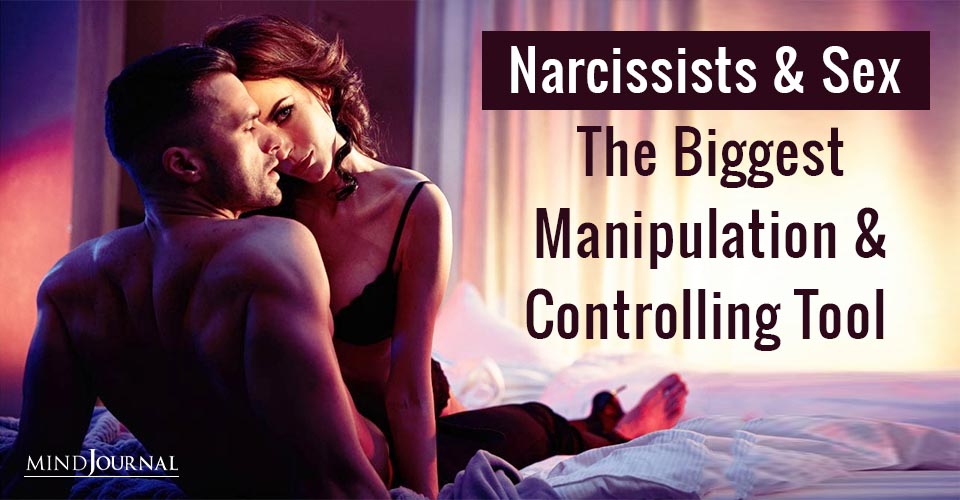 Do you know that narcissists often use sex as their biggest weapon?

Sex is one of the biggest ways narcissists manipulate and control the rest of us.

Many people mistakenly believe narcissists love sex. Actually, that isn’t true. They’re not even especially promiscuous. In fact, many narcissists are downright prudish. People with Borderline or Histrionic Personality Disorder are much more likely to be promiscuous because, in their minds, sexual attention is equated with love and acceptance.

Narcissists don’t love Sex. Sex is merely a tool they can use to get what they want or to control or manipulate their victim.

There are two kinds of narcissists: cerebral and somatic.

While very different on the surface, at heart they really aren’t very different at all. Neither has any empathy and neither has any desire to emotionally connect to another person and will go to great lengths to avoid it. This means neither a cerebral or somatic narcissist is capable of making love to another person because making love implies an emotional connection to someone else.

Cerebral narcissists are the pretentious, insufferable intellectuals, and achievers of the world. They think they’re smarter or more successful than everyone else and goes to great lengths to be adulated and admired for their “intellectual superiority” or “successful lifestyle.”

Cerebral narcissists often hate Sex and avoid it. They may even be prudish, especially if religiously-bent (many of them are because religion gives them “permission” to be hateful and judgmental toward others).

Related: “Your Brain on Love, Sex and the Narcissist” – by Shahida Arabi

Cerebral narcissists suffer the deepest narcissistic injury when their intellectual prowess or success in the material world is threatened, someone else is deemed smarter or more successful than they are, or they are exposed as being of only average intelligence or ability.

Because they aren’t normally promiscuous, they may be either asexual, or (to maintain the image of normality which benefits their lifestyle, or to fend off loneliness), they may desire to attract a spouse, which means sex is used to draw a potential mate to them and/or maintain a loveless marriage.

Sex with a cerebral narcissist is likely to be cold, machine-like, and lacking in spontaneity and emotional expression. The other partner is bound to feel frustrated and unfulfilled–and of course, the narcissist could care less. A cerebral narcissist may also withhold Sex as “punishment” or to control their partner.

While not usually promiscuous, some male cerebral narcissists may go outside their marriage (such as to a prostitute) to fulfill their physical needs, since to them, Sex with someone they don’t know or have a responsibility to is preferable because there’s no risk of emotional complications or demands from the Sex partner.

Somatic narcissists are concerned with their body image, health, or physical appearance. They believe themselves to be the most handsome, beautiful, or Sexiest person in any given room. They go to great lengths to maintain and embellish their most prized possessions–their own bodies.

They may use Sex as a way to woo potential partners because they know they can. But they don’t genuinely enjoy Sex; it’s merely a tool to get them the attention and praise they want. As with the cerebral narcissist, they’re incapable of making love–that is, feeling emotionally connected to another human being through the Sex act.

Related: The Perfect Ten Sentences of Seduction Used By The Narcissist

Some somatic narcissists may be promiscuous, but unlike a Borderline, Sex isn’t a “replacement” for love. It’s a tool that is used to control and manipulate a potential victim. A woman with somatic narcissism who has maintained an attractive body and style knows her Sexual attributes are most likely to win her a potential mate.

She knows she can bewitch a man with her body and doesn’t hesitate to use it for that purpose. But once she has won him over, she’s likely to begin to devalue and eventually discard him. If he has attributes she thinks she needs (money or success), she may even marry him because it benefits her lifestyle.

But she’s likely to get bored and be unfaithful. It’s a game to her; Sex is just the advantage she knows she has to win the game. Lest anyone think I’m being Sexist here, there are plenty of somatic narcissist men who act the exact same way, and the women they attract mean nothing to them except a means to an end.