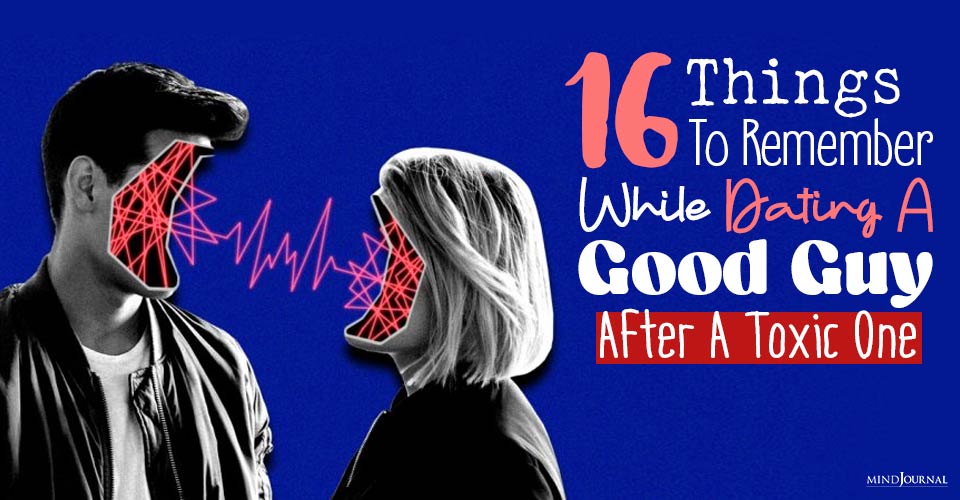 How do you brave the waters of finding love again after an old relationship scarred you? Meeting a good guy and dating after a toxic relationship can make all the difference.

It’s crazy to think how many people encounter toxic relationships.

You have a vague awareness that you aren’t always content in the relationship. But you would never rationalize your bond to be toxic. To find new romantic interests after a toxic relationship is an entirely mind blogging experience.

The person you so blindly trusted played with you in a way you previously thought was unimaginable. After you get out of that dark cave, you’re still sort of covering your eyes, because the new light’s just a bit too bright. But dating a after a toxic relationship should not be a pipe dream for you braveheart!

Things To Remember When Dating After A Toxic Relationship

Here are a few things that you need to keep in mind when you meet a good guy after a toxic relationship.

1. You Already Know What Love Is

Despite the way things ended, you experienced a sense of intense, real love, which is so much more than what people have experienced.

So don’t get too hung up on things if you aren’t right away dating after a toxic relationship ends. It’s a rear experience to meet someone who touches your soul after something so intense and destructive.

2. Now That You Have The Time, Reflect

When you’re in a relationship, you don’t get the me-time you need to think about things for a while. Utilize this interlude to explore your innermost thoughts and desires.

Just go over them in your head. While your ex may have been the one who destroyed the relationship ultimately, you’re probably more than aware of your own mistakes.

This is the perfect opportunity to think and reflect on your own mistakes and faults that left loopholes in the relationship. This introspection will assist in understanding the snag on your part. It always makes it easier for people when they start dating a good guy after a toxic relationship.

Read: What Are Traits Of A Psychopath?

Since your previous relationship almost destroyed you (emphasis on the almost), you might just want to focus on yourself for a while.

Just grab the bull by the horns. Hit on that sketchy bartender you’ll probably flake out on. Kiss that random guy who might be questionably younger than you.

Before dating after a toxic relationship, it’s okay losing yourself in the lure of passion. You don’t owe them anything; only yourself for all the fun you missed out on before.

And the best part? You don’t care about what others think of your escapades anymore. You came out through hell and want to rediscover yourself.

4. Take It Easy For A While

In a toxic relationship, especially a controlling one, you might have gotten used to your partner obsessing over you to the point of seeming insane.

Most normal people aren’t manipulative or obsessed about controlling you. So maybe your new romantic interest is not similar to your ex-partner who plagued your life. They take it easy; so while dating after a toxic relationship, don’t mistake their easy-going nature as indifference! Savor the freedom.

5. Never Be Afraid Of What You Deserve

Embracing insults and getting ignored? Those days are over. In fact, your sixth sense for the slightest sign of a toxic relationship should flare up if it ever happens again.

The best thing to do is to nip the bud earlier on in the game than later. That way you’ll avoid getting attached to fake people with malevolent intentions. Sure, initially it will hurt you a lot but what doesn’t time heal?

Related: 6 Telltale Signs Of The Most Toxic Relationship Of All

6. Build Your Relationship With Yourself

The foundations of all secondary relationships are based on the foundation of the bond you have with yourself. The stronger the bond with yourself, the more stable you are, and the lesser self-sabotaging you become.

Your intuition is probably more honest than your best friend at the end of a night out drinking. And that’s pretty honest. So listen to it if you want to be dating after a toxic relationship and to avoid unhealthy ones.