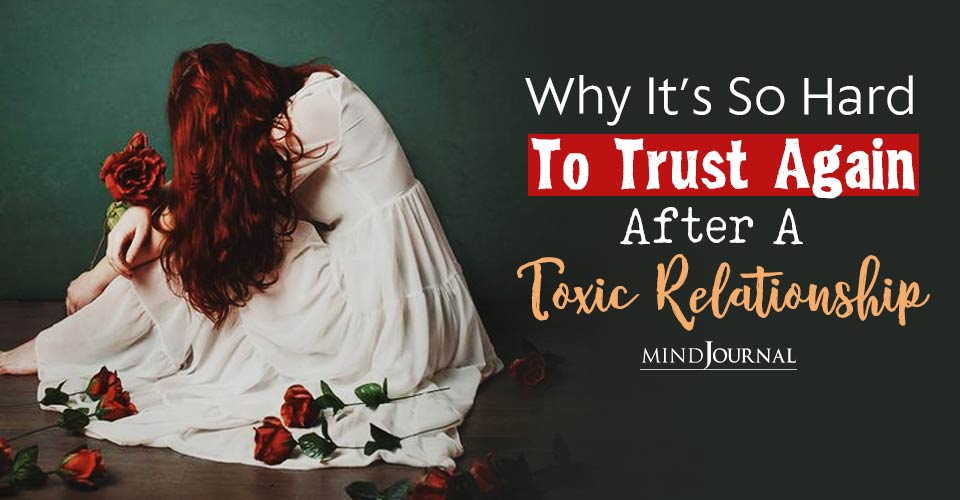 It is always extremely hard to trust again after a toxic relationship, and that is probably the worst takeback when it comes to it. However, learning to trust again is necessary, if somewhere deep, down inside, you still want to experience what true love feels like.

Toxic relationships aren’t something that just happens. Most of the time it starts off like any healthy relationship. But over time the combination of you two becomes toxic.

Suddenly you end up in this emotionally abusive relationship where you don’t even realize the damage that’s been done simply because the damage occurred over a period of time.

When one is in a toxic relationship you don’t see how bad it is. You don’t see how much it hurts. You grow numb to the pain. You dismiss the bad parts while clinging to the good parts that act as a highlight reel.

Related: How Can I Trust Again: 5 Ways You Can Restore Your Faith In True Love Again

You think it’s love but what it really is, is loving half of one person while being in denial of the toxic parts of them that project onto you. Whatever it is, they take it out on you. You’ve become an easy target because you forgive easily. You don’t take it too personally. But the emotional toll it has on someone to constantly be treated poorly, impacts every relationship you have afterward.

To end a toxic relationship is hard in itself but to recover from one is where the real challenge begins.

You suddenly become skeptical of everyone. Someone shows you their best and you expect the worst. You enter every relationship not just lacking trust within another but you don’t even trust yourself anymore.

You associate relationships with control and not something mutual where you meet halfway.

You think your best isn’t good enough because every time before this person looked for any mistake you made, any excuse to lose it on you, any reason to go after you and they did.

You learned to tiptoe and walk on eggshells because you never knew when they’d lose it.

And maybe it wasn’t physical abuse but emotional abuse does just as much if not worse damage.

Overthinking. Overtrying. So much effort towards someone who doesn’t deserve it. But you don’t see it that way. What you learn to is yourself through their eyes.

And along with them picking you apart, they groom you so much, the things they used to say to you, you’re now saying to yourself. A negative stream of blows they turn into self-destruction.

They are constantly striving to be good enough but when your best was never enough you learned to point at yourself and not others.

You learn to not believe compliments and if you do, you wonder what someone’s motive is.

Related: Learn To Trust Again: How To Recover From Being Cheated On (And Be Able To Actually Trust Again)

Because in toxic relationships you learned kindness came with strings attached. Favors came with ownership. Gifts were used for blackmail and manipulation.

Then you begin to believe everything they say. They manipulate you so much that even if you did pull away or leave, they don’t even have to say anything to get you to come back. You do so on your own.

Toxic relationships are just running in these circles that never really end. Your emotions are some games for them. And how you react keeps gives them this high because they have this influence on you.

You never really feel free from someone toxic because even when you walk away they hold you without touch. They’ve conditioned you and impacted you even in their absence.

You look at yourself and see them.

So even after goodbye, they are a ghost that haunts you, turning you into your own worst enemy.

Walking away isn’t the hardest part it’s reteaching yourself what you deserve in a relationship.

It’s learning who you are at your worst and making a choice to never be that weak or vulnerable again and allow someone to control you as they did.

It’s repeating over and over again good things about yourself when the voice the one on repeat says something negative. It’s being able to distinguish whose voice that really is.

Toxic relationships teach you what love actually is and what it isn’t.

Healing from toxic relationships starts with taking responsibility for your own actions but also understanding you aren’t responsible for someone else’s.

It’s not your fault.

When you realize that, your relationships change.

Related: How To Stay Strong And Trust Again When You’ve Been Hurt Before

Want to know more about how to trust again after being cheated on? Check this video out below!

previousEvery Person We Meet In Our Lives Is A Mirror and Here’s What They Teach Us
nextNovember 2017, Your Complete Horoscope: A Time Of Transformations And Transitions