13 Ways People Judge You When They First Meet You, According To Studies 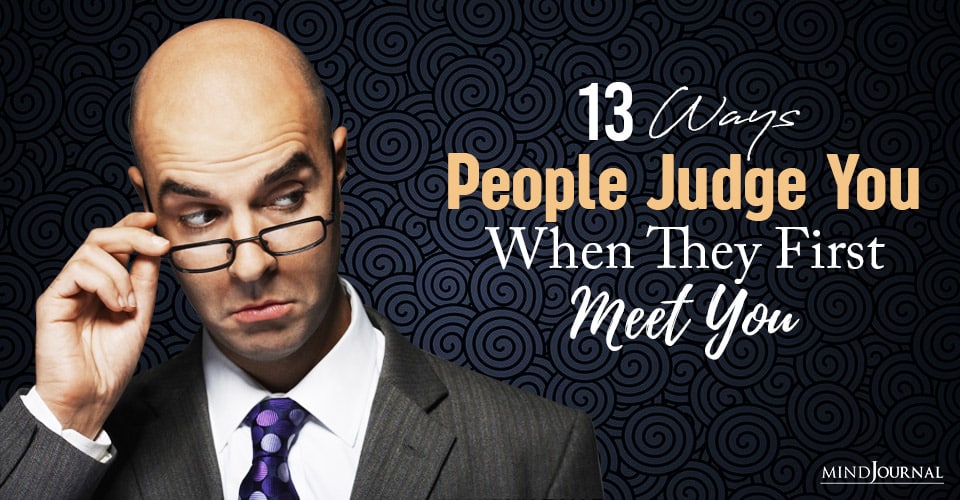 Most of us have the tendency to judge others as psycho or charismatic or positive or arrogant right after the first meeting. Isn’t it? Others judge us too! So, on what basis people judge you and your personality when they first meet you?

Before discussing that I would like to explain why people judge you.

According to Loretta Graziano Breuning, Ph.D., animals constantly judge each other because their brains seek ways to stimulate good feelings of dopamine, serotonin, and oxytocin and avoid bad feelings caused by the stress hormone cortisol. And the same is the case for humans.

Dopamine is a reward hormone and the animal brain seeks reward. For example when a lion is deciding when to hunt alone and when to hunt with an ally. Serotonin is released when you are enjoying the position of strength. So, the animal brain tries to know if it is stronger or weaker than other animals. For example,  a baboon deciding if it is safe enough to grab a bit of food in the presence of others.

Oxytocin is stimulated when you enjoy the safety of social support. For example, a chimpanzee deciding who to groom and who not to groom. The same is the case with humans. Cortisol is stimulated at times of danger or any sort of harm. So the animal brain is always asking “can you hurt me?”

According to certified coach Kellie Zeigler, we humans judge others because our brains are wired to keep us safe. It makes us judge quickly so as to attain stability and certainty as mentioned in Bustle.

When your brain makes you judge someone as a pessimist or egoistic, you will try to stay away from them to avoid pain or any sort of negative experience. Sometimes people are judgemental to know their own position in a social group just like animals. So, that they can decide whether to act dominant or submissive for survival.

Now that you know the scientific reason why we judge, read on know-how people judge you, your personality even when they hardly know you.

Here are 13 small ways people judge you when they first meet you, according to science.

1. The Temperature Of Your Hands

Read The Psychology of People Who “Hate People”

What people feel about you depends on how you talk to them. When you are honest and open about your life, some people will believe you are authentic, while others think you are an attention-seeker.

Different people will judge your speech patterns in different ways. As per zen psychotherapist Michele Paiva, your friends may enjoy it when you drop ‘F’ bomb because they consider you a real person. But, people outside your circle may dislike and look down upon you for it.

No doubt, it is a wonderful rule to dress as per the occasion. What’s important is the choice of colors. The type of color or shade you pick for your outfits influences what others think of you.

Wearing clothes with lighter tones indicates a friendly attitude, while darker tones are perceived as authoritative. People who often wear blue clothes are perceived as having power, integrity, and knowledge, as said by clinical psychologist Dr. Kim Chronister in an interview.

Read How To Deal With Judgement – 4 Effective Ways

Well, this is definitely not in your control, but it impacts how people judge you – your age, personality, and competence according to a study. Researchers from Syracuse University observed that female names like Anna or Elizabeth were more linked with warmth than competence, while male names were found to be the opposite.

Some people perceived names like Dolores or Donald as older when compared to names like Danielle or Devon. Names like John and Mathew were regarded as highly competent and warm. When an individual has a negative experience with a certain name say, Michael, they are more likely to rate them more negatively.