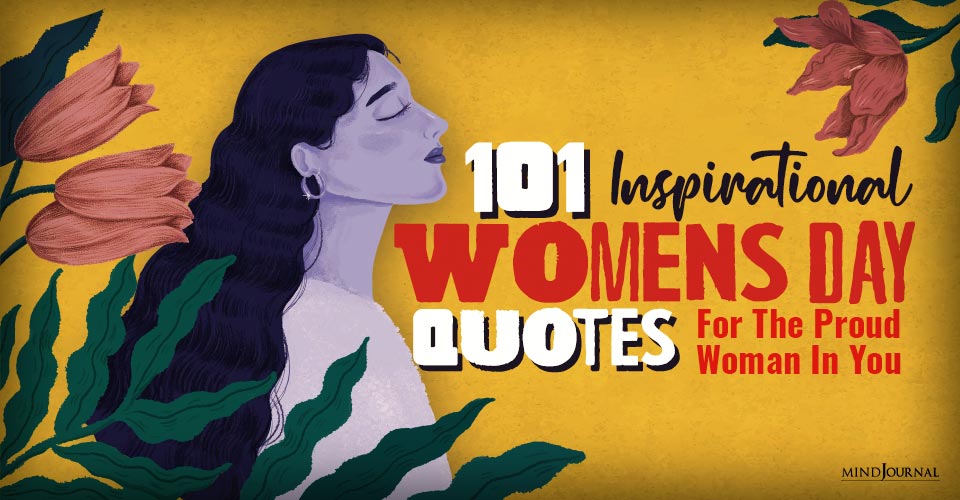 48. “Women’s freedom is the sign of social freedom.” – Rosa Luxemburg

49. “Every woman’s success should be an inspiration to another. We’re strongest when we cheer each other on.” – Serena Williams

50. “I do not wish women to have power over men; but over themselves.” – Mary Shelley

52. “More and more women are realizing that only collective strength and action will allow us to be free to fight for the kind of society that meets basic human needs.” – Roxanne Dunbar

53. “The best protection any woman can have is courage.” – Elizabeth Cady Stanton

54. “A strong woman looks a challenge in the eye and gives it a wink.” – Gina Carey

55. “There’s nothing a man can do that I can’t do better and in heels.” – Ginger Rogers

57. “By propagating women’s nature as non-violent they are discouraging women from becoming fighters in the struggle for their own liberation and that of society.” – Anuradha Ghandy

58. “I’m not going to limit myself just because people won’t accept the fact that I can do something else.” – Dolly Parton

59. “Behind every great woman… is another great woman.” – Kate Hodges

61. “The most beautiful thing a woman can wear is confidence.” – Blake Lively

62. “I am a woman and a warrior. If you think I can’t be both, you’ve been lied to.” – Jennifer Zeynab Joukhadar

63. “She didn’t care that people called her a bitch. ‘It’s just another word for feminist,’ she told me with pride.” – Gayle Forman

64. “Life is tough, my darling, but so are you.” – Stephanie Bennett-Henry

66. “There is nothing stronger than a broken woman who has rebuilt herself.” – Hannah Gadsby

68. “Whatever you do, be different – that was the advice my mother gave me, and I can’t think of better advice for an entrepreneur. If you’re different, you will stand out.” – Anita Roddick

69. “Figure out who you are separate from your family, and the man or woman you’re in a relationship with. Find who you are in this world and what you need to feel good alone. I think that’s the most important thing in life. Find a sense of self because with that, you can do anything else.” – Angelina Jolie

70. “There is no gate, no lock, no bolt that you can set upon the freedom of my mind.” – Virginia Woolf

71. “When a woman is assaulted, one of the first questions people ask is, Did you say no? This question assumes that the answer was always yes, and that it is her job to revoke the agreement. To defuse the bomb she was given. But why are they allowed to touch us until we physically fight them off? Why is the door open until we have to slam it shut?” – Chanel Miller

72. “A revolutionary woman can’t have no reactionary man.” – Assata Shakur

73. “Women, if the soul of the nation is to be saved, I believe you must become its soul.” – Coretta Scott King

74. “Maybe it just boils down to: I’m a woman who’s really into her career, so I’m obsessed with the craft of my work… There’s a romance in that for me.” – Mitski

75. “They cannot stand that a refugee, a black woman, an immigrant, a Muslim, shows up in Congress thinking she’s equal to them. But I say to them, ‘How else did you expect me to show up?'” – Ilhan Omar