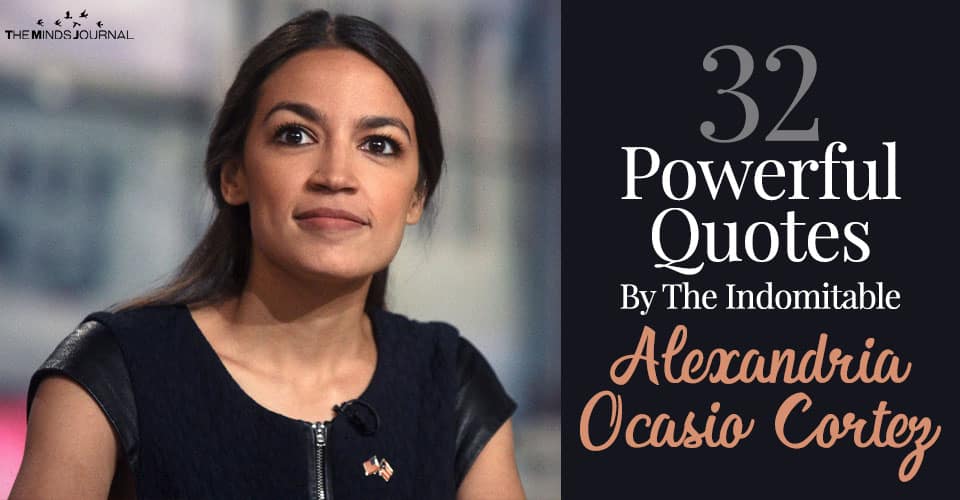 At just 30, she is the youngest woman to be a member of the House Of Representatives, and also the youngest Congresswoman in the history of the United States Of America. Alexandria Ocasio-Cortez is not addressed as a powerhouse just like that.

Her powerful quotes are a testament to her passionate and progressive mindset when it comes to the numerous issues plaguing America currently. This has made her one of the most loved and admired politicians ever.

A staunch feminist, she serves as an inspiration for all those women who dream of being something. Being someone. Here is a compilation of some of her most powerful quotes, that is gradually changing the position of women in the field of politics, and deservedly so.

Some Powerful Quotes By Alexandra Ocasio-Cortez

2. “We have built power. We have organized. What we have built is permanent. No. Matter. What.”

5. “Give people the respect of your honest opinion, and always meet them where they’re at.”

7. “Women like me aren’t supposed to run for office.”

9. “I want to speak to people directly as much as possible.”

11. “It’s really scary or it’s easy to generate fear around an idea or around an -ism when you don’t provide any substance to it.”

12. “I don’t think any person in America should die because they are too poor to live.”

14. “If I was a rational person, I would have dropped out of this race a long time ago.”

15. “I’m used to being on my feet 18 hours a day. I’m used to receiving a lot of heat. I’m used to people trying to make me feel bad. They call it ‘working class’ for a reason because you are working non-stop.”

16. “I never saw myself going into politics, but now that I sit here in this room with you all, I just feel like we can only accomplish great things together.”

19. “This has to also be about saying, Hey, time to turn the page and write the new chapter, and what does that look like?”

24. “We don’t have to be anxious about our future. Instead, we can be brave and act now. We can be our own heroes, and heroes for the generations to come.”

25. “I keep things raw and honest on here since I believe public servants do a disservice to our communities by pretending to be perfect. It makes things harder for others who aspire to run someday if they think they have to be superhuman before they even try.”

26. “So take up space. Speak up. Hold the door open and take others with you. Accept that you will be criticized no matter what—that is the price of fighting for change and innovation. I consider constructive criticism a blueprint for improvement and a medicine for ego.”

27. “I believe in an America where all things are possible. Where a basic, dignified life isn’t a dream, but a norm.”

28. “Ultimately, feminism is about women choosing the destiny that they want for themselves.”

29. “If women and gender-expanding people want to run for office, we can’t knock on anybody’s door—we have to build our own house.”

30. “They’ll tell you you’re too loud, that you need to wait your turn, and ask the right people for permission. Do it anyway.”

31. “When you decide that you want to be just brave, it opens up way more possibilities than trying to be perfect ever does.”

Coming from a life of poverty, Alexandria Ocasio-Cortez knows the importance of hard work and struggle. Ambitious and confident of herself and her abilities, she knows that she can make a huge difference in the world with her strong opinions and policies. Her love for America and all its people is what makes people sit up and take notice of her. Her powerful quotes prove that she is well and truly, the future of the United States Of America.