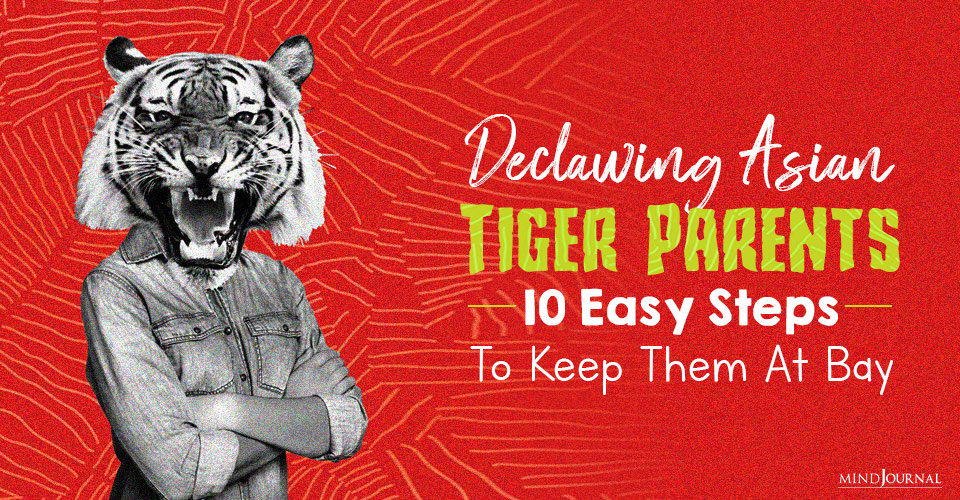 There are some Asian parents and families who have the need to protect traditional honor. They’re commonly referred to as “Tiger Parents“. In this process, Asian tiger parents may be strict, intrusive or unsupportive without realizing the consequences it can have on their children. If you have a parent who behaves the same way, here’s all the things you need to know.

Tiger parenting is a kind of harsh parenting style in which parents are extremely involved in their children ’s learning and development. Tiger parents, in particular, encourage their children to excel academically or in high-status extracurricular activities such as music or athletics.

** This post is strictly satirical in nature. Nothing in this post should be misconstrued as therapeutic advice in any way, shape, or from in your interactions with Asian parents or parental figures.

This stereotypical style of strict parenting became notoriously or pejoratively known as “tiger parenting” from Amy Chua’s best-selling book, Battle Hymn of the Tiger Mother. In it, she describes how her parenting style, learned from her childhood experiences with her own parents, fostered what she considered a “better” way to raise children compared to Western or American standards.

It was controversial because much of what she advocated to help her children “succeed” could be considered beyond strict, bordering on emotional and verbal abuse. For example, she recounts calling one of her daughters “garbage” with her native Chinese dialect.

In many ways, the book perpetuates and validates this style of traditional Asian parenting, in which a child’s self-esteem and emotions do not warrant attention. Asian clients and Asian message boards abound with stories of this style of parenting.

As a counterpoint to those suffering from tiger parents, here are 10 steps to help keep the pain away.

You might not know, understand, or acknowledge that the insults, put-downs, and name-calling can be considered abusive but you do know you don’t like it. It’s time to tune them out. If the earplugs seem disrespectful, you can consider the next suggestion.

Obviously this is just a means of appeasing them by appearing to agree with them by saying yes or nodding your head. It’ll help create some emotional distance from them so long as you know you’re doing this on your own accord.

Related: Narcissistic Fathers: The Dark Shadow They Cast From Childhood To Adulthood

If you’re of age, move out and learn how to be independent from an early age. You might also google “emancipated minor” in your state (i.e. legally considered an adult and no longer under the auspices or authority of your parents).

Asian parents love to control, manipulate, or guilt-trip you with their money. (e.g. “I paid for your phone, car, education, etc.). Try to nip this in the bud as early as possible. Learn to be financially self-sufficient. Work at McDonald’s.

Tell them you live in America and are an American. (Sorry, I’m not sure how well this works outside the U.S. and Canada.) Tell them you don’t consider yourself Chinese, Korean, Vietnamese, etc. Bear in mind that renouncing your heritage may invoke the fury of not only your parents but all your dead ancestors as well.

Despite the barrage of criticism you’ll get, sharing this occupational epiphany with them early on will pay huge dividends in the long run. Due to their obsessiveness and fixation over your grades, education, and future job prospects, telling them upfront you want out of the corporate rat-race will likely generate generations of ancestral backlash. But if you can withstand the backlash and eventually decide to go into a more “financially-stable” field, they will be frothing at the mouth with delight. If you do go the creative route, well at least you’ve paved the way for your brothers and sisters to endure fewer emotional beat-downs.

Sam Louie is a psychotherapist and relationship coach in Seattle and Bellevue. He holds a Master's of Arts degree in Clinical Psychology with an emphasis in marriage and family psychotherapy.View Author posts