The Guy Who’s Just Not Into You 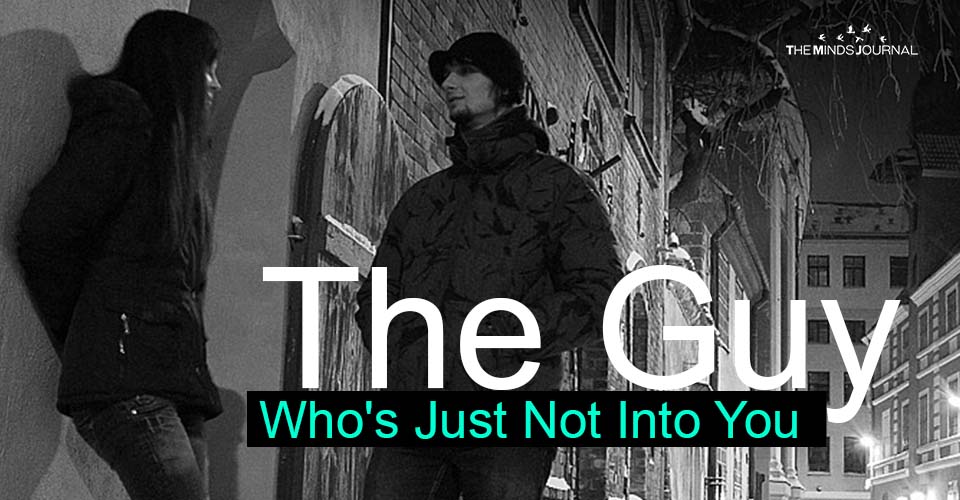 What if he is not into you?

One of the worst feelings in the world is when you fall in love with a guy who doesn’t even have the audacity to tell you that he can’t love you back.

At one point in your life, you’ve been disillusioned by convincing yourself that if you’ve flirted quite enough, you can get that man you’ve been eyeing on.

You allow your confidence to sky-rocket up to the top of the world because why not? You look fine as hell. Your personality doesn’t suck. And your grades in school were okay. If anything, you are the most qualified person he can date with.

Related: How to Know When to End a Relationship That is Making You Miserable

But sometimes it doesn’t work that way. Getting a guy to like you doesn’t require a shiny resume. Al though your level of fame and number of followers on social media are plus points to boost your dating reputation, but in today’s dating culture — it’s a lot more complicated than that.

Most guys want their satisfactions to be fulfilled endlessly, and you have to always be careful not to bore them. Because then, they’re going to move on to another girl who they think they can find what they’re “looking” for. Next thing you know, you’re going to go home with your shoulders slump, head swirling by the thought of, “Well. I guess he’s not into me.”

You can’t help but think: Is this really the kind of dating world we all live in right now? A world where men identify themselves as hopeless romantic just because the phrase sounds good. A world where men always end up saying, “Lol. Hate to break it to you but you’re not really my type.”

He’s not just into you.

Related: 4 Myths About Men You Need To Stop Believing

How perpetually horrendous it is that that you don’t fall for his standard.

He doesn’t see you as someone who can take the role of temporary girlfriend in his life. He thinks you’re too caring. He’s worried that you’re going to be one of those batshit crazy, needy girlfriends. And he doesn’t like that.

He likes someone who doesn’t ask too many questions. He likes someone who’s not touchy, and is on the same page with him about not putting labels in a relationship. He just wants the kind of girl who’s chill, and is okay to be dropped off like a hot potato whenever he feels like it.

Related: 8 Signs He Likes You

But if you’re really going to ponder about it, maybe there’s a blessing in hearing, “I’m sorry. I’m just not into you.”

Watch this video to know how to tell if someone truly loves you:

Maybe your life will become so much better than settling for a total loser who’s probably going to end up living alone in his apartment with his video gaming consoles. Maybe you’re worth more than just a girl that’s good for the moment.

Maybe your PowerPoint presentation of “Why you should date me” will be appreciated by a guy who’s more stable, and responsible than the one who rejected you. A guy who will think your questions are all valid, and will not consider you as too emotional.

Related: How To Get Your Ex Back Without Sounding Needy Or Desperate

So instead of occasionally seeking out for guys who will potentially just storm off to a different direction without even bothering to say goodbye to you, perhaps you need to start looking for the one who will make you think, “Damn. Where have you been all these times?”

Are you in love with a guy who’s just not into you? Let me know your thoughts in comments.