10 Signs You Are Being Gaslighted In Your Relationship 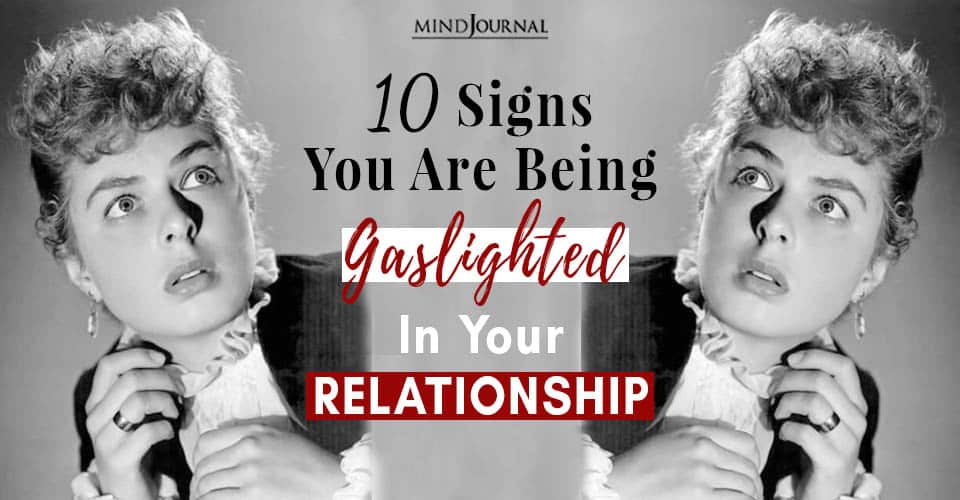 Gaslighting in relationships, emotional abuse and manipulation. Is this happening to you? Are you being gaslighted regularly?

If you’ve ever been gaslighted you’ll know the feeling. You think you’re going crazy, right?

Your gut is screaming at you. You know what you’ve seen and heard.

The narcissist in your life – a partner, colleague, even a friend – is denying it. It didn’t happen. You’re imagining it. Made it up. You’re too sensitive. You’re exaggerating. That’s gaslighting.

They’re lying to you. Bald-faced lies that you can even prove are false. Yet they tell you it’s you who is telling untruths.

They’re having an affair, but accuse you of being the unfaithful one. That’s gaslighting too.

You can’t understand it. It’s so obvious to you, but it’s like rationalizing with someone incapable of seeing sense.

You express your concerns with them about any of the above. The conversation gets twisted. The problem lies with you. Your sensitivity, your insecurity, your paranoia.

You walk on eggshells around them as you’re always to blame. It’s your perception that’s wrong, not the perpetrator’s abusive behavior.

It didn’t happen first. When they were seducing you with their charismatic, charming side.

Then, out of the blue, they reveal a little of the darker side hidden within.

A quick flash of anger, perhaps. Then it’s gone. You’re shocked. You think:

Did that really just happen?

It’s easy to doubt yourself, especially when they’re all charming again. They’re convincing you whatever it was they did wasn’t as bad as you thought.

You start to think you must have caused it and you change your behaviour instead. You keep adapting your behavior, in the hope the emotional abuse will stop.

Despite the fact your gut instincts were telling you the truth all along, you begin to mistrust them.

Maybe I am wrong?

You feel the need to prove you’re worthy of them and that you’re not who they say you are. They begin to have control over you.

Gaslighting, what is it?

Gaslighting in relationships is an insidious form of psychological manipulation. It’s designed to confuse you and question your sense of reality.

It plants seeds of doubt in you that make you question your memory, perception of events. Even your sanity.

But like a frog in boiling water, you’ll not notice they’re brainwashing you, until it’s too late. This form of coercive control happens little by little, over time.

Gaslighting can happen to anyone. It’s used by cult leaders and dictators, along with narcissists. It’s an effective tool.

The word originated from a 1930s play Gas Light. In it a husband denies he is turning on the gas lamps in their attic. This leads the others in the house to dim and flicker. He tries to convince his wife who notices it she is imagining it and going crazy.

Over time a gaslighter’s manipulation becomes more complex. It wears down a victim’s sense of identity and self-esteem. Their aim is to gain control over you and it works.

Signs of Gaslighting In Relationships

Your certain of what you’ve seen them do. You’re sure of the words they’ve said. Yet they deny it and them.

Your gut is screaming at you that their behavior is wrong. Perhaps abusive. Yet, when you bring it up they deny it and throw it back onto you.

You’re too sensitive. Exaggerating. Your perception of events is wrong. You’re lying.

You feel on edge when you’re around them. Uneasy. You walk on eggshells, never sure of what will happen next.

What they say to you is the polar opposite of what they do. Their abusive actions do not match their loving words or promise to change.

Your head is telling you they’re no good for you and will only hurt you. Yet, they somehow convince your heart to stay.

Even when you can prove they are doing so, they lie. They do it with such confidence and to your face. You start to doubt your version of events. That’s what they want.

In the case of a narcissist the old adage – if you lie often enough it becomes the truth – is what they believe.

Their lies are to keep you off balanced and confused.

3) They flat out deny what they’ve said or done

I didn’t do that. You’re making it up

Then they’ll likely get angry and point out all your flaws.

4) They accuse you of doing exactly the things they’re doing.

Projecting onto you their own actions and behavior.

For example, they might accuse you of having an affair, which you’re not. All the while they’re the ones being unfaithful.

Or they’ll lie and accuse you of lying.

Related: How My Journey Through Abuse Transformed My Life For The Better

5) They lie to you about others

Convince you your family is not looking out for your best interests. Your closest friend is jealous of you and out to get you.

They want you to mistrust others. To break down your safety net. Those who could confirm to you their behavior is abusive and no good for you.

Ultimately, to isolate you. All the better to control you.