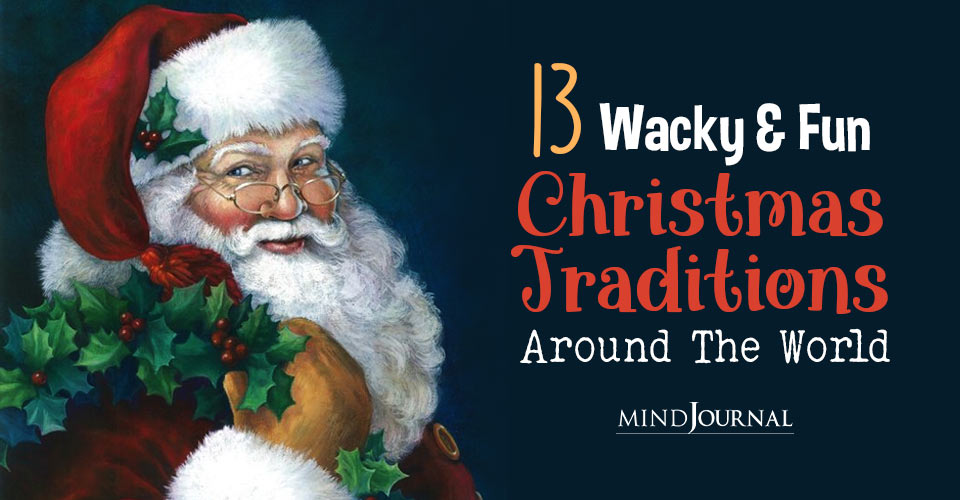 Who doesn’t love Christmas? Unless you are the Grinch or Ebenezer Scrooge, I am pretty sure you love celebrating a traditional Christmas with your family. But do you know how the rest of the world celebrates this festive season? Here are some fun and wacky Christmas traditions around the world.

It’s The Most Wonderful Time Of The Year

It’s that time of the year again. Shopping like crazy at the last minute, hanging stockings over the chimney, putting up the Christmas lights, decorating the Christmas tree, making gingerbread houses, drinking eggnog, kissing under the mistletoe, listening to Christmas carols, watching Christmas movies, dressing up as Santa Claus, opening presents and spending some jolly good time with our families. Ah yes, the merry spirit of Christmas is in the chilly winter air.

Related: New Netflix Christmas Movies 2021 To Watch With Your Friends and Family

5 Wacky and Fun Christmas Traditions Around the World

To get you in the Christmassy mood, here are some wacky, weird and wonderful Christmas traditions around the world that make the holiday season merrier and even more fun:

In Sweden, the holiday season is celebrated with the Yule goat, which is usually made of straw and is believed to guard the Christmas tree. The tradition is believed to date back to the 11th century and according to ancient pagan legends, Saint Nicholas himself rode on a man-sized goat figure (unlike the Krampus, but more on the later) to deliver gifts to everyone. The Yule goat is even regarded as a benevolent spirit who protects everyone from the devil. Nowadays, people in Gävle, Sweden erect a gigantic statue of a straw goat decorated with red ribbons and festive lights and it is commonly known as the Gävle Goat. Unfortunately, the straw goat is burned by vandals each year, which in itself has become an unofficial tradition in the town.

Japan never lets you down whenever you’re looking for some weird and quirky fun and Christmas is no different. One of the wackiest family Christmas traditions around the world is people eating food at KFC in Japan. This crazy festive tradition started back in 1974 with KFC’s “Kentucky for Christmas” (Kurisumasu ni wa kentakkii!) promotion campaign and now Japanese people can’t have enough of KFC’s fried chicken for their Christmas Eve dinner. So instead of feasting on a traditional turkey dinner, families and couples visit their local KFC outlet to celebrate a merry holiday evening. Now this is one tradition you can surely bring home because who doesn’t like to munch on a bucket of good ol’ crispy Kentucky Fried Chicken with Colonel Santa.

3. Austria: The Night of Krampus

Since Halloween is my favorite holiday ever, the legend of the demonic Krampus is one of my most favorite Christmas traditions around the world. Austria has the legend of Krampus, the evil counterpart and accomplice of Saint Nicholas. While Father Christmas brings presents for ‘nice’ kids, the ghoulish and devilish creature known as Krampus stalks the streets on the nights leading up to Christmas searching for ‘naughty’ kids to take them away in his sack. Young men all across Austria dress up as Krampus during the holiday season and scare children (and even some adults) with scary pranks and ghastly sounds of bells and chains. In Vienna, people even celebrate the annual Krampus parade to spread the festive cheer.

Related: 51 Things To Do On Christmas – Alone

Love Christmas lights and decorations? Well, then you will surely love how Filipinos celebrate the festive season. One of the most amazing Christmas traditions around the world is the ‘Ligligan Parul Sampernandu’ or the giant lantern festival celebrated in the City of San Fernando, Philippines. The celebration involves dazzling lanterns resembling the Star of Bethlehem. The lanterns or parols are created on bamboo frames with numerous spinning lights that spread the Christmas cheer by lighting up the night sky.

Thousands of people from across the country, and even from the world, visit the city to see the holiday lights and enjoy the festivals & masses celebrated from early September to January. No wonder San Fernando is known as the Christmas Capital of the Philippines. The Filipinos also celebrate the Noche Buena, which is a grand celebration with family, neighbors and friends during the holidays.

In case you didn’t know, it’s typically summer in the Southern Hemisphere during Christmas. And so people living down under celebrate the festivities a bit differently than the rest of the world. Although they sing Christmas carols holding candles, a tradition known as ‘Carols by Candlelight’, the lyrics are modified a bit to replace phrases on winter and snow with native words, which makes Australian Christmas carols and songs very original and unique. Moreover, they also decorate their homes with the Christmas Bush, a tree native to the region. But as Christmas time is so hot in Australia, people often throng to the beach where they dress up as Santa Claus to surf the waves in red surfboards instead of riding Rudolph the red nosed reindeer. The Aussies surely have unique traditions when it comes to Christmas traditions around the world.

More Fun And Unique Christmas Traditions Around the World

We can never have enough of Christmas, right? So here are some more wonderful and quirky traditions celebrated around the globe during Christmas time:

During the 13 days leading up to Christmas, children place shoes by their windows as the 13 Yule Lads (jólasveinarnir or jólasveinar), dressed in traditional costume, visit them each night leaving presents for well-behaved children and rotten potatoes for the naughty kids. This is surely one of the wackiest and most fun Christmas traditions around the world.

Traditionally, Finish families warm up together in a sauna as it is considered as a sacred place related to their ancestors. After the customary sauna session, families eat porridge with an almond hidden inside and whoever finds it, wins the game.

According to Norwegian legends, witches and evil spirits become more mischievous on Christmas Eve. And as witches are known to ride on brooms, families across Norway hide their brooms and sweeping sticks inside their homes so that witches or ghosts can’t find them.

Related: 9 Tips For Coping With Holiday Stress And Depression

Among all the different Christmas traditions around the world, Germany holds a special place as the legend of Santa Claus is believed to have originated from Germany with the real-life priest Saint Nicholas. Saint Nicholas Day is celebrated on December 6th and on that night Nikolaus leaves gifts and sweets in shoes which children leave outside their homes. They even have their own version of Krampus, known as Knecht Ruprecht.

The Christmas tradition of Las Posadas is celebrated by everyone in Mexico from December 12th to January 6th. Posadas means shelter or inn in Spanish and commemorates Joseph and Mary’s journey from Nazareth to Bethlehem and their search for shelter. Children are dressed in robes and participate in Posada processions. Children also break piñatas filled with toys and candy.

Christmas and roller skating? Can it get any better? In the city of Caracas, Venezuela, people celebrate Christmas by attending the morning mass on roller skates. The tradition is so wildly popular that cars are not allowed on the streets on that day so that people can reach the church safely.

When talking about the best Christmas traditions around the world, we have to mention Switzerland and Santa’s sinister sidekick Schmutzli. To be precise, Swiss traditions include two Christmas characters instead of just one Santa Claus – Samichlaus (or St. Nicholas), who bears gifts, and Schmutzli, the dark bearded, black robe-wearing anti-Santa who punishes badly behaved children.

While there are many other countries and cultures with their own fun and wacky Christmas traditions, the fascinating holiday rituals mentioned above are undoubtedly some of the most interesting and wonderfully bizarre traditions followed during the holiday season.

Related: 11 Ways To Deal With Your Toxic Family During The Holidays

Have A Holly Jolly Christmas

Regardless of what our culture or tradition is, the most important Christmas tradition we all love to follow year after year is spending time with our family, friends and loved ones, spreading joy and helping those in need. And while we wish that everyday could be as merry and jolly as Christmas day, we all have our own rituals and traditions we love to follow that make this special holiday even more memorable, fun and wacky.

So go ahead and have yourself a Merry Christmas!