8 Popular Christmas Traditions Around The World With Terrifying Origins 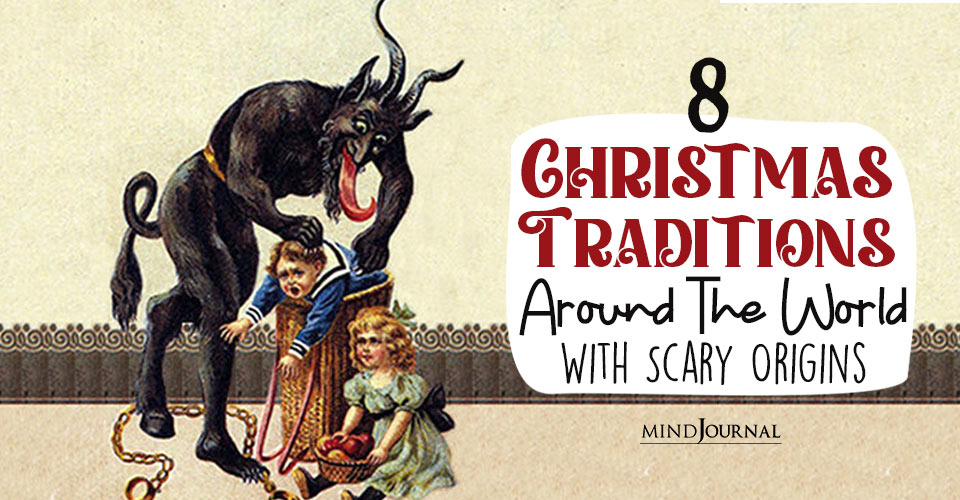 Christmas is a time for love and cheer. It’s a time to recollect, reflect and make new memories. It’s time to give and spread joy. It’s the most wonderful time of the year. And Christmas traditions around the world make it even better. However, the traditions and customs we know and follow were not always as merry as we think them to be today,

“Twas the night before Christmas, when all through the house, not a creature was stirring, not even a mouse.” – Clement Clark Moore

All the amazing popular Christmas traditions around the world, like placing stockings, putting milk and cookies for Santa, kissing under the mistletoe, giving coal to naughty children add greatly to the holiday cheer. But some of these traditions have really weird and scary backstories.

Modern-day Christmas is a collection of contrasting traditions that can be traced back hundreds of years, whether it’s hanging mistletoes that originated from kissing boughs during the Middle Ages or decorating Christmas trees which the Vikings simply loved.

While we are worried about what type of wrapping paper to use for the gifts, our ancestors worried about how to ward off the witches. Most of the traditions we follow during the holidays were, in fact, created for a completely different reason from what we believe.

8 Popular Christmas Traditions Around The World With Weird Backstories

Some of these old traditions have some absurd and eerie backstories that can make our skin crawl. Here are 8 popular Christmas traditions around the world and their creepy backgrounds that you need to know about.

“Satan? I am not Satan!” the beast growled. “I am Krampus, the Lord of Yule. Now if you do not get out of my way I will tear out your heart and eat it!” – Brom, Krampus: The Yule Lord

Every year, children wait for good old Santa Claus to visit them. Good kids who have been nice all year get gifts and treats from Father Christmas. But in many European countries, kids get a lot worse than just a mere lump of coal.

They get a visit from Krampus – the demonic half-man, half-goat monster with large horns. Krampus is the negative counterpart of Saint Nicholas who steals away bad children and takes them to his lair to torture and eat them. This folklore is widely popular in Austria, as well as Croatia, Slovenia, and northern Italy. It is certainly one of the most popular and weird Christmas traditions.

Related: 6 Signs To Tell If There’s A Negative Energy In Your Space And 6 Ways To Clear It

These were decorated on the windows of different houses to trap evil spirits and witches. It was believed that the shiny balls would attract the eye of an evil witch and neutralize them by confusing the witches with the pattern or reflecting it back. They believed it would trap the evil inside and protect their homes from negativity.

Today the traditional Christmas dinner usually involves turkey and a meat dish with all the trimmings. However, during the 1500s in England, upper-class Christmas celebrations involved a particularly sinister and grisly centerpiece as the main dish: a flaming boar’s head.

The head was served to guests with candles inside the cooked boar’s mouth to make it appear flaming. Although it may not be appetizing to us now, back then they used to sing a song about it and the kind of threat it posed to people when the boar was alive.

Want more Christmas traditions around the world with weird and terrifying origins? Read on…

Related: Surviving Christmas: 11 Ways To Deal With Your Toxic Family During The Holidays

4. Putting a wreath on the door

During Roman rule, the emperor persecuted people who practiced other religions and celebrations, including Christmas. In this season, the Romans celebrated the Festival of Saturnia, their own religious holiday. During this festival of the Roman god Saturn, traditionally a holy wreath was given as a gift.

As a hidden message to other Christians in the region, Christians would hang these wreaths on doors to signal that Christmas was being celebrated in their homes.

5. Christmas Carols were meant to ward off evil

Joy to the world, the Lord is come

Let every heart prepare Him room

And Heaven and nature sing

Christmas carols are an essential part of Christmas today, whether you play it on a device or sing a symphony to bring in the Christmas cheer. However, the real story behind one of the most popular Christmas traditions around the world is this –

Related: Christmas Quotes to Get You in the Holiday Spirit

This is one of the most terrifying Christmas traditions around the world that has a really a creepy backstory!

Making gingerbread houses have become a tradition since the publication of Hansel and Gretel by the Brothers Grimm. So despite how cute these tiny houses decorated with candies may appear now, they are not made for a happy gingerbread family. The original gingerbread house was made by a witch who just wanted to cook and eat children.

7. Mistletoe doesn’t mean what you think

Mistletoes are hung above doorways for kissing and sharing love. The tradition started during the times of the ancient Druids and it is supposed to bring good luck and ward off evil spirits. According to Norse mythology, it is a sign of friendship and love and this has resulted in the tradition of kissing under the Mistletoe.

However, the term Mistletoe was derived from the Anglo Saxon words “Mistel” and “Tan”. Mistel means dung and Tan means stick or twig. So roughly translated, Mistletoe means “poo on a stick”. Isn’t that romantic?

Related: The Best Holiday Gifts For Each Zodiac Sign

8. Gryla and the Yule Cat

Here is another really interesting Christmas traditions around the world that has a scary origin story. According to Icelandic Christmas folklore, Gryla is a giant ogre who comes out of her cave during Christmas time. She hunts for children, kidnaps them, takes them back to her cave, and cooks them in a stew. She has a number of minions, namely her 13 reckless troll children called Yule Lads and the Yule Cat monster called Jólakötturinn.

The Yule Cat is a terrifying mythical creature who roams in the dark lanes of towns and peers into the windows of children to abduct them if they didn’t receive any new clothes for Christmas.

“The best of all gifts around any Christmas tree: the presence of a happy family all wrapped up in each other.” – Bill Vaughan

Christmas is a time for embracing traditions, no matter how weird or creepy they might be. Despite these scary backstories, Christmas remains the most favorite holiday of the year across the globe. It can be a wonderful time filled with joy and happiness when you spend the holidays with your loved ones sharing the Christmas spirit of love, faith, and cheer with everyone.

Merry Christmas! And let us know your thoughts about these popular Christmas traditions around the world in the comments down below!