Your Christmas Holiday Character Based On Your Zodiac Sign 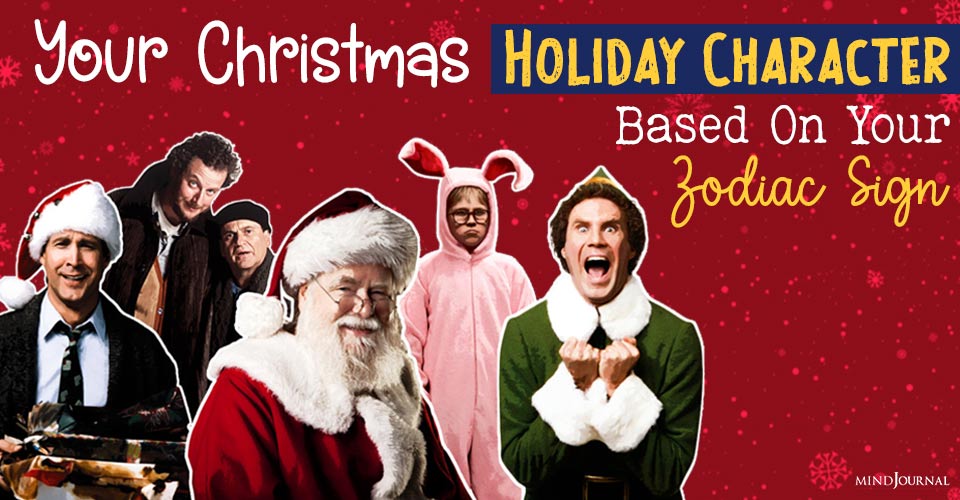 Have you ever wondered what Christmas Holiday character are you?

Christmas is here! That means a lot of Christmas movies are back on TV. Naturally, that brings up the most interesting conversation; what is your Christmas holiday character?

Now, to help you with your eggnog-fueled late-night debates, here are the most relatable Christmas holiday characters based on your zodiac. In that way, you’ll have some serious ammunition to bring to the who is who fights.

So, let’s jump right in and discover the Christmas holiday character of each zodiac!

Here’s your Christmas movie character based on your zodiac sign!

Cindy Lou from “How The Grinch Stole Christmas”

The zodiac of courage, determination, and confidence you are all about being dynamic, being first, and winning.

For that reason, we’re going to have to go with Cindy Lou from “How The Grinch Stole Christmas” for you.

She’s determined and smart and works harder to save Christmas from the mean people trying to steal Christmas. Maybe this year you can do so by keeping the eggnog away from quarrelsome family and friends.

This is the zodiac of those who are devoted and practical and have real patience. And those are great qualities to have when yet another holiday adventure creates a crazy situation where somebody has to step up and save Christmas.

For that reason, the character that goes with Taurus has to be Cady from “Mean Girls”.

Okay, it’s not really a holiday movie. But hey, they sing Jingle Bell Rock so it’s a close one. Besides, she embodies the patience and dedication necessary to get things done. Just think about how hard she worked to take down Regina in the film. You might not want to emulate all aspects of her character, of course.

Amy from ” A Bad Moms Christmas”

The Zodiac of the truly gentle spirits who are both adaptable and curious. Gemini is great at talking to nearly anybody and creating a pleasant situation for everybody through their personality and the ease with which people can get along with them. The Gemini is capable of adapting to every situation they’re in, making them both fun when they need to be and serious when it’s called for.

So, obviously, the best character for them has to be Amy from ” A Bad Moms Christmas”.

Okay, maybe you don’t want to drink as you shop. But you do adjust well to whatever life throws your way. Like when her mother comes over for Christmas unexpectedly and she still just dealt with it? Now that’s the Christmas spirit.

The Zodiac of the imaginative and the loyal and those that are emotional but in a good way. If you’re Cancer then you like being at home at least some of the time – including when you get into your hobbies.

For that reason, you’re Serena from Gossip Girl’s “Roman Holiday”.

Just look at how creative she is when she goes all out to make snow for her boyfriend. She is well connected to her emotions, and she loves to be at home – just like a true Cancer.

The Zodiac of the creative and the passionate, the warm-hearted, and the cheerful. You’re fun and funny – two qualities that make you one of the most enjoyable people to gather around for the holiday spirits (And any other time, really).

That’s why this Zodiac is the character Buddy from “Elf”.

You can see that, right? He’s funny and oh so lovable! And he’s creative too, as he’s able to get Santa’s sleigh to fly. And that, if you think about it, is a neat trick of physics!

Pam from “The Office” – The Christmas Party

This is the zodiac sign of hardworking and loyal people who are kind both to people and to animals. Sure, you do have a bit of a need for control, but that can be a great treat to have if you need to sweat the details, be it because you’re an artist or because you’re a text translator.

That’s why you’re clearly Pam from “The Office”, The Christmas Party.

She’s incredibly organized and while she doesn’t let the cat out of the bag all the time, she has that positive attitude that has her see each day as a new (and potentially great) opportunity.

Frosty from “Frosty The Snowman”

People of this Zodiac are diplomatic, fair-minded, and cooperative. They aren’t terribly good at being alone, which makes sense as they’ve got a deep-seated need for justice and equality.

That’s why the character that most clearly fits the Libra sign is Frosty from “Frosty the Snowman”.

You work hard for equality and justice and just like you, he’s made of sugar, spice, and everything that’s nice.

The Zodiac of the passionate, resourceful, and brave. You are a true friend even if people don’t quite realize that often. That’s because you’re passionate and assertive, which sometimes might rub people the wrong way but they still see it for what it is in the end.

For that reason, the character that fits Scorpio best is Kevin McCallister from “Home Alone”.

You will defend the house and you will hold the bad guys to account. Add to that how you can turn the whole house to your advantage and you’re clearly one of the most legendary characters from this holiday season.

You’re funny and generous. You’re a free spirit and love the outdoors (though occasionally you prefer it through a window). And deep down you’ve got an optimistic go-get-’em attitude.

Okay, you might not get quite as freaky as she did. But you’ve got that great sense of humor and that same need for freedom. Nothing holds you back. Not even bad Santa.

Mrs. Claus from “The Santa Clause”

You are the responsible one, who has the self-control to make the important calls when you need to. You understand how the group fits together and who should do what. Things would go so much smoother if they just let you be in charge.

For that reason, you’re Mrs. Claus from “The Santa Clause”.

You saw what happened. You took the right route forward. You teach and you obviously understand what it’s all about in the end, even if perhaps you’re initially a bit misguided.

The Zodiac of Aquarius is about being independent and fun. Deep down inside (perhaps not so deep) you love the Christmas spirit. And sure, you might be a little shy on occasion, but that doesn’t change that you’re filled to the brim with good cheer and energy.

For that reason, as an Aquarius, your closest Christmas Holiday character has to be Clark Griswold from “National Lampoon’s Christmas Vacation”.

This is a man living for Christmas and ready to truly embrace the spirit of the moment. And of course, there is that core of daydreaming for good times that just so fits in with the season.

Jovie from the movie “Elf”

Pisces are well known for being compassionate, artistic, and wise. They love to sleep and are generally better off on their own, and there is that connection with music that follows them wherever they go.

For that reason, Pisces are obviously Jovie from the movie “Elf”.

You have a singer’s soul, are always there with good advice, understand one of the craziest cities inside and out, and – of course – you help save Christmas. Now, if that isn’t the epitome of Pisces I don’t know what is.

Did you find this post interesting? What is your Christmas holiday character based on astrology? Let us know your thoughts in the comments down below!

Dina Indelicato is a blogger enthusiast and freelance writer. She is always open to research about new topics and gain new experiences to share with her readers. You can find her on Twitter @DinaIndelicato and Facebook. View Author posts