7 Signs Of A Female Narcissist 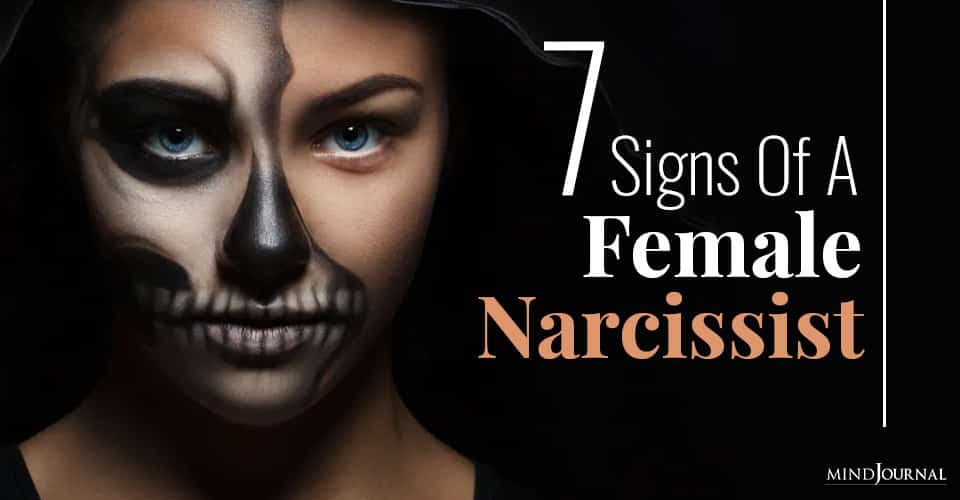 We have read so much about a narcissistic man, but how does a female narcissist work?

We all have met someone of the kind that comes across as totally self-absorbed, entitled towards others’ time and energy, and inconsiderate to the point of being called harsh when it comes to the feelings and sentiments of others.

Narcissism is a real phenomenon, with or without the label. It is considered to be a personality disorder. Despite being included in the DSM-5, narcissistic personality disorder, according to the Psychiatric Times, continues to be a highly debated subject. One of the reasons is that it is not seen as much in psychiatric settings, while private practice seems to feature more cases of this disorder.

So what is narcissism and is its occurrence any different between the genders?

According to Mayo Clinic, it is “a mental condition in which people have an inflated sense of their own importance, a deep need for excessive attention and admiration but behind this mask of extreme confidence lies a fragile self-esteem that’s vulnerable to the slightest criticism.”

It must also be remembered that narcissism occurs across a wide spectrum.

There may be narcissists who are obsessed with their looks but not as unkind when it comes to the feelings of others. There could also be those who put in significant time and energy to appear powerful, but who are well aware of their self-esteem is actually weak. The latter in fact s often referred to as a “vulnerable narcissist”.

Those who figure beyond the “vulnerable” aspects of the spectrum, actually often have a more consistent sense of self, put together by a certain unyielding quality.

To an extent, it can be said that narcissism plays out differently in the genders. Look at the world of fashion, clothing, and cosmetics, and you’ll want to think it’s women who are the more narcissistic lot. However, departmental and drug stores will tell you a different story, when you look at the number of product off-shoots that now cater to men. Go over to the bike and car dealers, and the side of male narcissism takes an even more significant turn.

What then is the difference between male and female narcissism?

Emily Grijava from the State University of New York (SUNY) along with her team, looked at data obtained from almost half a million adults who were studied between 1990 and 2013. They based their findings and conclusions on the Narcissistic Personality Inventory (NPI), across three themes culled from the 40 statements in the index that calculate narcissistic leanings.

The four factors taken into account in the study were exploitative/entitlement, leadership/authority and grandiose/exhibitionism. The course of the study also involved the team looking at the “vulnerable” aspect in narcissism.

The study found that men can indeed outscore women across two of the three counts, if not all three.

In the themes of exploitative/entitlement and leadership/authority especially, men ranked higher, while overall as well, men seemed to take the cup for being more narcissistic. The researchers connected this to the way men and women are socialized, men often being recognized for their drive for power and women being punished for it.

On the other hand, in the theme of grandiose/exhibitionism, women tended to outscore and the researchers connected this to the possibility of the fairer sex feeling the pressure of appearing more attractive.

As far as the “vulnerable” part of the spectrum goes, men and women turned out to be equal in feeling the burn of a fragile self-esteem.

How do you then spot a female narcissist?

The question then is: What it is in women that you can search, to figure you’re dealing with narcissism?

Here are 7 ways to spot a female narcissist:

Across time and cultures, the message that women should be well-turned out has become more real than ever.

In a narcissistic scenario though, this aspect is taken to a whole different level. From body size to outfits to fitness to makeup, everything that ties into “looking good” is usually high up on the list for a narcissistic woman.