Why A Narcissist Cannot Have A Deep Connection with anyone 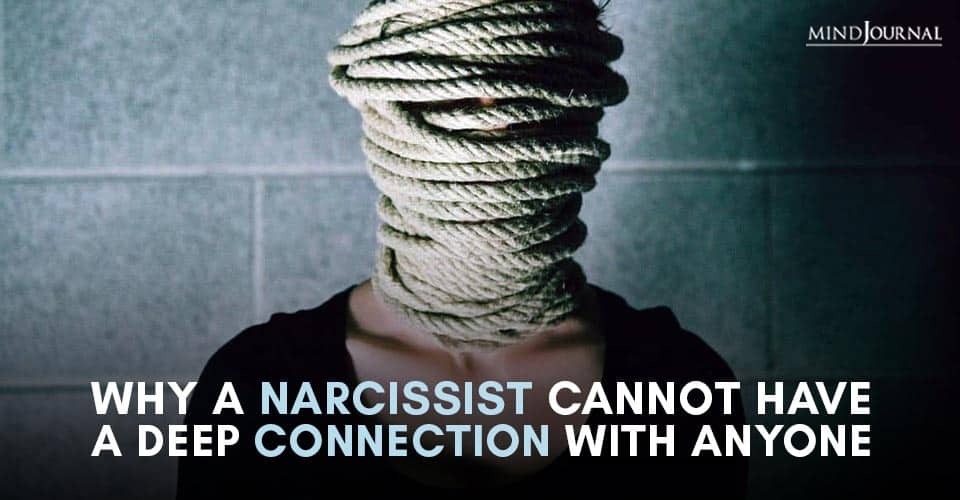 If you have ever been in a relationship with a narcissist, you would know how difficult it is to have a deep connection with them.

The proud, young and beautiful hunter, born of a river god and a water-nymph loved to disdain the affections of people who fell in love with him.

Nemesis, goddess of just-deserts, on seeing this attracts him to a pool of water where he sees the image of his own beautiful face and sits gazing at it, soon losing his mind over his own beauty and failing to perceive that what he saw was but an illusion.

In time he withered away and died, only to be metamorphosed into a flower that bore his name, blooming by the waterside, still gazing at its own reflection.

This was, in brief, the story of the hunter Narcissus from whom springs the term “narcissism”. As very evident from the story, narcissism is an overt obsessive fixation about one’s own self, one’s own physical appearance, and the public perception and admiration of the same.

It can be extrapolated to a general sense of superiority and a need to prove it even if it doesn’t make sense. Also, as mentioned before, narcissism is also partly about fixating on the public approval/admiration of oneself. Rejection is something that narcissists can’t handle.

This condition is oftentimes damaging to any relationship, but is especially bitter when it comes to a romantic one since the success of a romantic relationship is highly dependent on mutual equality and mutual approval.

As a matter of fact, it can be much worse than just an unhappy relationship.

Abusers and narcissists do share quite the set of characteristics.

Firstly, none of them are particularly empathetic.

Secondly, they are both control freaks. Having the upper hand is always on the top of their lists.

Thirdly, and this is especially organic to a narcissist’s character, they are self-absorbed.

The worst part is, it is very difficult to make distinctions:

Both start off with a lot of charisma (which is after all the appeal of a narcissist in the first place) but, slowly undergo changes that exhibit their insidious nature.

Women dating narcissistic men often misconstrue such signs of obsession to be signs of deep love and caring. A good example would be the jealousy directed towards male friends. What the woman should ideally see is the man sizing down the opposition and not them being “passionately in love”.

Extrapolating from this, narcissists are also highly likely to be domestic abusers, which is why it is very tough for you to have a deep connection with a narcissist. Kent State University researchers suggest that “the anger, hostility, and short fuse that accompany a man’s narcissism tend to be directed toward straight women.”

“They go on to say that “narcissistic men can become enraged when they are denied gratification… including when people reject them.”

According to a University of Munster research (2017), narcissists inflate their self-love in two ways; the researchers christened it “NARC”: The Narcissistic Admiration and Rivalry Concept.

The Admiration aspect of it deals with social admiration and the taste for the positive outcomes of such acceptances. The Rivalry aspect deals with the inability to accept someone else as the center of attention and to cope with it by constantly trying to outdo others, in an unhealthy way.

A simplistic explanation for this would be the innate lack of trust in a narcissist. He/she cannot trust someone in a close relationship and as a result, he/she makes it difficult for the other to survive in it.

No individual can feel good about themselves all the time and despite their desperate efforts, neither can narcissists. However, they try their best to hide their vulnerabilities and weaknesses.

So in a way, it is not the superiority complex that defines the narcissist; it is the intensity with which he/she hides their weaknesses.

It is also the reason behind narcissists rarely seeking help or therapy: Exposing their flaws can be quite the challenge for them.

Moreover extending from the NARC model and the rivalry aspect, the sense of intense competition and the need to be on top cuts any possibility of trusting in a relationship short making it problematic and difficult.

And extrapolating this same thread, it is difficult for narcissists to make commitments in relationships that call for it.

So if you are in love with such an individual, keep the bar low and think about the red flags as objectively as possible, before advancing.