7 Warning Signs You Are Dating A Narcissist 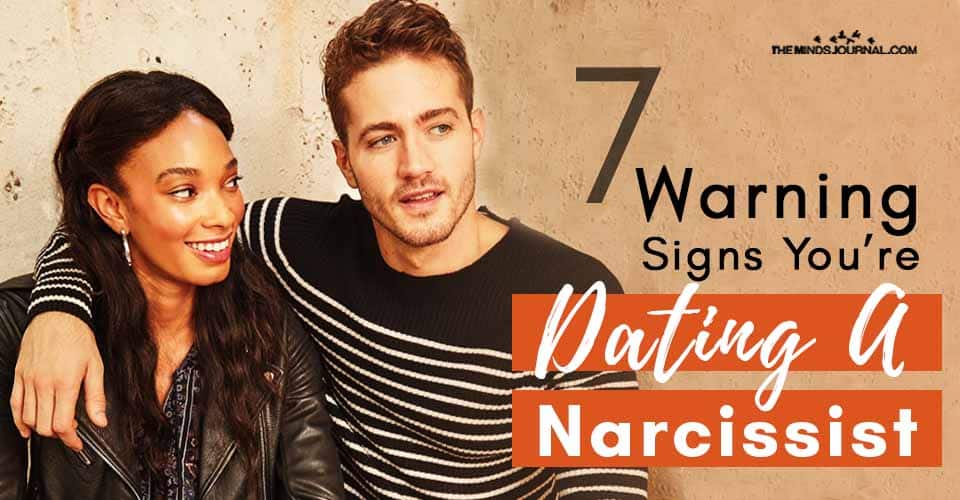 Have you ever been in a relationship with a narcissist? If not, then there are a few things you should keep in mind before dating a narcissist.

“The main condition for the achievement of love is the overcoming of one’s narcissism. The narcissistic orientation is one in which one experiences as real only that which exists within oneself, while the phenomena in the outside world have no reality in themselves, but are experienced only from the viewpoint of their being useful or dangerous to one. The opposite pole to narcissism is objectivity; it is the faculty to see other people and things as they are, objectively, and to be able to separate this objective picture from a picture which is formed by one’s desires and fears.”
― Erich Fromm, The Art of Loving

The other day, a friend of mine was telling me about her recent break-up. She has been seeing this guy for quite a while now and there was something in him which didn’t click. ‘He’s always talking about himself,’ she complained. ‘It was just getting on my nerves. He wouldn’t even bother to listen to me, my life.’ Initially, when two people meet, they need to know each other and it is absolutely okay to talk about oneself.

In order to be in a healthy relationship, one should know one’s partner well, with all their good and bad. But that’s not the problem with people like my friend’s ex. People like them, who are called narcissists, will keep on talking about themselves no matter what the situation is.

So, in the relationship, only one person is getting the chance to talk while the other person just listens. This is absolutely not healthy. In order to make a relationship work, both the persons should have their say, both of them should be a part of each other’s lives. If only one person keeps on indulging in narcissism, the other person will remain the loner, with nobody to listen to.

How do we know whether the person we are dating is a narcissist or not?

Here are 7 signs which will help you identify that person.

The person will propose you quickly after a few weeks or a few months of interaction.

You will get idolized and praised as if you are the one he was waiting for all his life. Yes, this might sound like a fairy tale. But I will give you a reality check! This is crap. We all know nobody can be this saintly to wait for that one particular person and this wise to recognize the person in such a short span of time.

Remember, he just wants to trick you into his world.

The person will have a tragic story or multiple stories like that.

You will be told of those cruel people who came in his life, played with his heart, and then left him broken. All of us have gone through break-ups. That doesn’t imply that only he had the worst of them all.

This is just a way to get sympathy and attract your attention so that you can fall into the trap and listen to him for the rest of his life.

It might sound great when your partner tells you how better you are than his ex.

Now, don’t forget that there was a point of time when he was in love with his ex too and considered her to be the best girl in this world. We all have certain positive and negative aspects.

Only talking about the negative aspects of the ex will never make you better than her in any way. This might happen to you too.

(4) He and his accomplishments:

How many times do you have to listen to his accomplishments and keep on clapping and praising him? Literally every moment? Then this is a red alert for you.

A person who keeps on talking about their accomplishments always and indirectly demands appraisal is someone who is just way too engrossed in oneself.

He wouldn’t be interested in yours and would want you to keep on praising him to satisfy his ego.

Looking to know more about dating a narcissist? Read 5 Red Flags and Blind Spots In Dating A Narcissist

He only knows to talk about ‘I, Me, and Myself.’ Whatever you discuss, will eventually come down to him.

Each and everything in this world will have a connection to his life and he will then talk about it. This is not just boring but it also shows how self-centered person he is.

A self-centered person can never love anyone but himself. So, be careful.

(6) He’s affected by each and every little thing in this world:

Is the store closed? He gets upset. Is it raining too heavily and he can’t go out? He gets upset. Each and every little thing that happens seems to trigger his emotions and he will be upset about them.

This not only brings negativity into your relationship but also shows how insensible he is for not understanding the situation.

(7) You have to be there whenever he wants you:

Have you seen him getting upset if you failed to meet him when he needed you? Do you have to meet him too often? Well, reality check again!

He wants you so that he can talk about himself. He wants you not because of the companionship but for his narcissism.

So, if you find these traits in your partner, it’s high time you realize it’s not worthy enough to take the relationship forward. Good luck. There are extremely nice people in this world who are better than narcissists.

If you want to know more about whether you are dating a narcissist or not, then check this video out below: