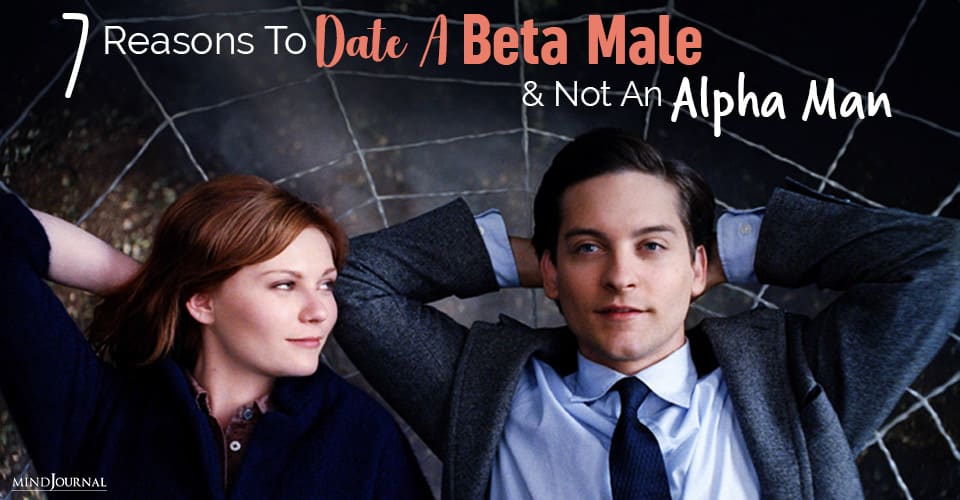 Why you should date a Beta male, not an Alpha Man. In case you have no clear understanding of how alpha and beta personalities differ you may refer to socio sexual hierarchy, a personality categorization system that categorizes men as per their social position among other men.

The common myth about being a beta male is that they are weak, there are many stereotypes that beta males are losers, lazy, and downright hopeless. In contrast, are the “Beta” males, alpha males are always perceived as ‘attractive’. However, these definitions ignore the actual meaning of being a beta male which is a beta male lives his life through values and they don’t like confrontation or taking sides. A beta male might be the best kind of guy you can date as they are reliable and cares about what you want and the most important thing, doesn’t take things for granted.

I don’t know about you, but so many of the women I have known in my life all have one thing in common. They go for the bad boys, or at least they did do until they got the secret I discovered the hard way.

I was hooked on a bad boy when I was young. I would never have dreamed of dating a Beta male. My attraction to him was instantaneous and intense.

The connection I felt to him was such as I hadn’t felt before. He consumed me. I felt safe.

He was going to deliver this wonderful happy-ever-after he promised. After all, he told me I was the only one for him, unlike any girl who’d come before.

It was a whirlwind romance. But it descended into a terrifying, exciting rollercoaster. There were tumultuous fireworks, followed by chasms of hurt and pain. Round and round in a crazy cycle.

It scraped bottom with me almost losing my life, as he squeezed my throat and told me to die.

I stayed with him for some time, even after that. The effect he had on me I can’t describe. It was like a magnet that pulled me back and I was powerless to stop its force. I’d leave and stay strong, for a time. But then the pain of leaving him was so great, I craved that high he could give me once again.

‘I’m sorry, I’ll never do it again. I need you more than ever to help me change’ was all it took. I just wanted him to sweep me into his arms again and everything would be okay. But of course, it wasn’t.

I did find the courage to leave, but only after marrying him and having his baby. I thought that each of these acts would finally prove I was worthy of him and make the relationship work. I was wrong. I learned the hard way that two people who are as insecure as each other will never fulfill each other’s needs. The relationship was doomed from the start.

You could describe me, I guess, as an Alpha female. The mirror to him in a way. But all that confidence and cockiness I had when I was young, belied the truth that I never felt good enough. Deep down he was the same as me. Our baggage matched.

But I could hide my insecurities behind this role I played. Rescuer. I could be the one to bring out the ‘real him’, patch up his hurt inside. It hid the fact it was me I needed to fix.

It took me years to understand I confused those fireworks with love.

That matching baggage feels familiar and comfortable. It felt right like we just fit. But that didn’t mean it was a healthy match.

It took many more to see myself for who I was, a frightened child inside the body of an adult. It hurt to see her. But I finally knew what I had to do to heal.

Focus on her, learn to love me, and accept that I am good enough. I deserve better.

Then I met my Beta boy. I started to date a Beta male. I did it right this time when I married him. It turns out he’s the most Alpha man I know.

“The true measure of a man is how he treats someone who can do him absolutely no good.” – Samuel Johnson

I wish I’d known this secret about men when I was young, so now I want to spread the word.

Falling in love and dating a Beta male is the way to go. Here’s why:

7 Reasons Why You Should Date A Beta Male

Okay, before I get a barrage of arguments to the contrary, I’m not saying all Alpha men are bad boys. But the ones who are, are all bluff and no substance.

They’re great at faking an intense connection to hook you in. They say everything you want to hear and can sweep a girl off her feet.

But when it comes down to it, they talk the talk, but do they walk the walk?

They promise you the world, but do they deliver on that? No. Even so, so many of us keep hoping and waiting for it to come.

You may not get the massive fireworks at the start with a Beta boy. You might even dismiss them, at first, as boring.

But it’s deceptive. It’s a slower build. Mine kept simply showing up and being there for me. There was time spent getting to know each other. It scared me.

“Men are handicapped in love, either in giving or in receiving. They consider love as a sign of weakness”

I was used to the intensity, followed by an argument that came out of nowhere, only for Bad Boy to disappear. Feeling hurt, I’d be wondering what I had done, waiting and hoping for the rush of when he loved me again.

I tried to push Beta Boy away. Revealing the real me to him scared me. What if I repulsed him and ran away? It tapped into my greatest fear.

I feared abandonment, so I guess was trying to end it, before he ditched me. Then one day he said to me: ‘You know I’m not going anywhere don’t you?’

They are there for you. Fireworks, with dramatic breakups and intense reunions, are not loved. They’re just a smokescreen. To avoid intimacy and true trust. The necessary ingredients for a healthy relationship.

2. You Can Be Vulnerable With Them And Trust Them.

Without trust, you can never reveal you’re true self to another person. If I showed vulnerability to my ex, he’d use it later to shame me.

That’s the definition of a healthy relationship with me now.

My beta husband knows me better than anyone else. He knows my flaws, all my weaknesses, and fears. He has allowed me to be vulnerable but has never used it as a weapon against me. The more we’ve revealed about ourselves, the deeper the connection we forged.

Beta males are not afraid of emotion, nor of their own emotional side.