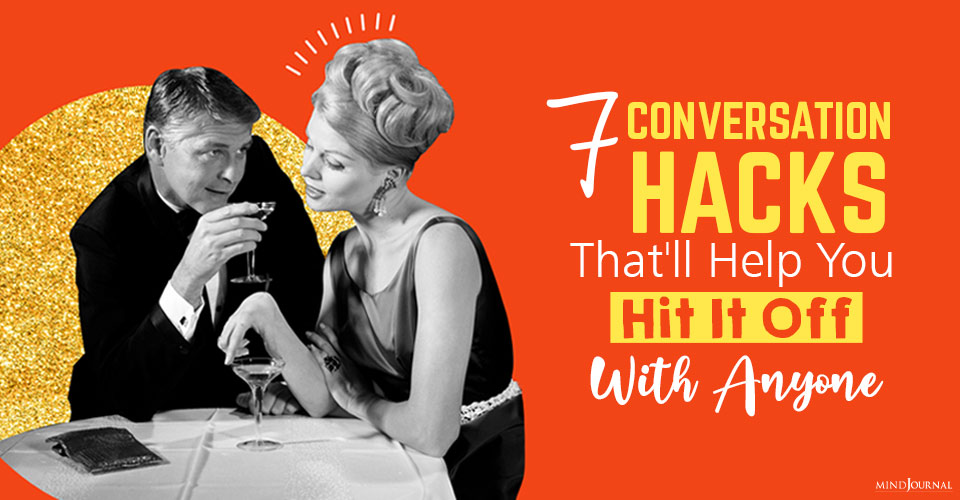 Small talk is not everybody’s cup of tea, and if you are an introvert, you will relate to this. Then there are other people who have no trouble indulging in small talk and think that it is not that big of a deal. The thing is if you are someone who falls in the former category, you tend to be misunderstood more often than not; people think you are arrogant, snobbish and you hate people, even though that’s not the case.

Having good conversation skills is a useful thing to have, and even though you do not have to talk all the time and to literally anyone and everyone, having the ability to hold a conversation can be an amazing thing. What you can do is adopt a few useful conversation hacks that will help you converse with people better, and build up a rapport with them.

If you feel awkward, or have trouble speaking to people despite wanting to, try out these practical conversation hacks that can help you with your dilemma.

1. Ask Them About Themselves.

Everyone loves talking about themselves, whether they admit it or not, and even science has proved it. When you give an opportunity to someone to talk about themselves, and their opinions, they will always be happy to tell you a story or two about their lives.

According to research and studies by neuroscientists, the act of indulging in self-disclosure activates the pleasure centers of the brain, similar to that of money and food.

The next time you speak to someone, try to figure out what is it that they want to or love to talk about, and then ask them to talk about it. Because you will be stimulating their pleasure centers and rewarding them, they will end up wanting to talk to you more, and also like you.

Related: 50 Red Hot Conversation Starters To Spice Up Your Date

The mirror technique is one of the best conversation hacks that you can use to your benefit. But, keep in mind that mirroring is okay to a certain extent, after which it might start to seem creepy and uncomfortable for the other person. Make sure that you try this out in a very nonchalant way, and make it look coincidental.

When you see that someone is reserved and quiet, try to emulate that with them. If you see someone is very energetic and extroverted, mimic their behavior. If someone has a distinctive way of speaking, you can adopt that style to some extent.

If you end up doing a balanced job of mirroring, you will not only be perceived as a genuine person, but also someone who is on the same wavelength with them, and with similar interests, and personalities.

If you find yourself bored or lost due to the lack of interesting things to talk about, why not ask some interesting questions yourself? The more you ask about a person, the more invested they will be in the conversation.

Because let’s face it, who doesn’t like talking about themselves? Another great thing about asking questions is that they are pretty non-judgemental when compared to opinionated answers and responses.

For example, if someone feels offended or hurt due to something you said, instead of getting into a war of words, ask them clearly what offended them. This way you will not only come across as a mature and open-minded person, but they will also welcome the chance of explaining themselves. And you might end up learning a thing or two yourself!

4. Show A Positive Attitude When You Talk About Other People.

When you are complaining about someone, the person opposite you will naturally assume that someday you will complain and criticize them in the same way in front of other people. They might also link your complaints with you, and shoot or project them right back at you.

This is the biggest reason why you should never speak negatively about your former boss during interviews. Your potential or current employer will see you in a negative light and will consider you as someone who is not dependable and trustworthy.