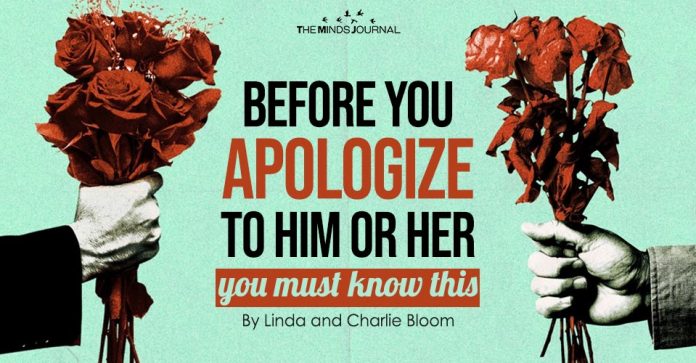 Before You Apologize to Him or Her, You Must Know This

Read This Before You Apologize to Her (or Him)

Love does (sometimes) mean having to say you’re sorry.

Breakdowns happen in relationships. Despite our best intentions, there are times in relationships in which one or both partners is careless with words, where feelings get hurt, when anger is unfairly displaced, where there is insensitivity to the other’s feelings, where we do or say things that we regret or that cause harm, and more.

This is not to justify or excuse such transgressions, but to acknowledge the inevitability of these situations. It is of course a good idea to do everything that we can to minimize the frequency and severity of our transgressions, but when they do occur, the next best thing is to exercise damage control. This process generally involves the repairing of trust that has been broken or perceived to have been violated.

A sincere apology involves more than making statement of regret over having caused pain or difficulty for another person. It is of course, a good beginning but it will often require more than this to complete the process.

There are several components involved in the making of an effective apology including:

Of having acted or spoken in ways that have either deliberately or unintentionally caused emotional, mental or physical harm or pain to another. This requires the willingness to accept responsibility (not to be confused with blame or fault) for having contributed to a diminishment of trust, respect, or goodwill in the relationship.

A sincere apology is one in which the speaker has no agenda other than to heal whatever damage my have occurred in the relationship as a result of his or her actions or words. Their words need to be honest and heart-felt, and expressed without an effort to coerce, deceive, or manipulate the other person’s feelings.

In the course of offering an apology, the offended party may interrupt an apology while it is being offered. This is an excellent time to resist the temptation to insist that they allow you to finish or to “correct” or challenge them in any way.

Your partner may have a lot of emotion to express, feelings that sometimes have to do with other, previous unacknowledged disturbances.

Giving them a chance to express themselves without fear of reprisal, reactivity or defensiveness on your part will provide you with an opportunity to demonstrate that you really DO want to hear from them and that you’re not just there to get them to listen to you.

Keep in mind that your job here is not to be right or to defend yourself (even though the impulse to do so will likely be very strong) but to have your actions embody your words.

In this case that requires a willingness to if necessary, hold your tongue until your partner has had their say, even if that means allowing them to interrupt you or disagree with your perceptions or memories. After they have had their say, they will, in all likelihood be more open to hearing from you. Try to be patient.