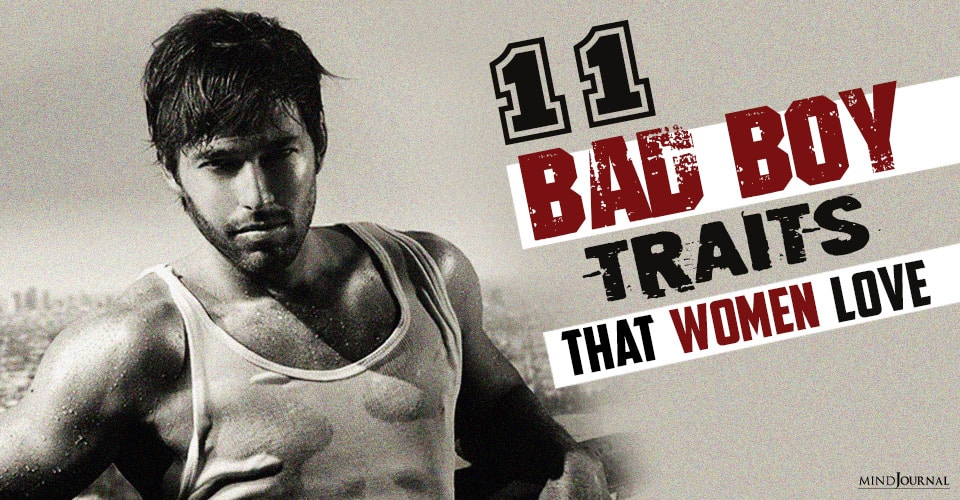 It is no secret that women prefer to date bad boys over nice ones. At the very least, they want their man to imbibe some of the bad boy traits that stoke their feminine energy. On the other hand, gentlemen wish they had some of the bad boys’ dating prowess. In short, bad boy qualities are much in demand!

Look at fictional art- time and again, directors and authors have chosen a bad boy to be the protagonist.

By bad boy, I don’t mean a life-destroying kind of man who has been behind the bars several times.

I mean the kind of guy women swoon over, the one that gets the best girl with great ease. The one that runs his fingers through the knots of a woman’s soul and casts a spell so hypnotic that all other matters become secondary in her life! Scientifically speaking, a bad boy is ‘’hyper-masculine’’ and ‘’oozes testosterone’’ which leads to his ‘’boldness and exaggerated sexuality’’. He may be ‘’rebellious and emotionally unavailable’’ too.

From a layman’s perspective, some common adjectives that describe the bad boy persona are self-confident, headstrong, daring, magnetic, and elusive.

Have you wondered why, despite all the conventional red flags, a woman can’t resist falling for bad boys?

Women often have a sheltered upbringing where they are taught to be compliant and obedient. Hence, the inner wild child that was suppressed all along finds a gateway. The freedom of being with a bad boy is an exhilarating experience for many women.

Knowing that the bad boy is unconventional and someone they shouldn’t give their hearts to, strengthens their attraction and takes the chemistry to a whole new level.

3. Women enjoy a sense of accomplishment.

Sometimes women tend to look at a bad boy as a project they need to work on to get the rewards. It’s like a test of their womanly powers. So, when they finally land a bad boy, it gives their confidence levels a big boost.

Many wannabes think that changing things externally, like their clothes, looks, and attitude will turn them into the bad boys that women find attractive. But the difference between nice guys and bad boys is the mindset. Bad boys have a unique mindset that sets them apart from the rest of the men.

This is one of the attractive bad boy qualities. Real is rare, and damn attractive. It’s just so much cooler when guys are genuine around women. Bad boys aren’t afraid to reveal their true colors, regardless of what the world thinks. Their unapologetic authenticity has a great impact on a lady’s mind.

They couldn’t care less about fitting into the nice guy’s shoe. Being genuine takes guts and reflects their no-nonsense, strong character. This persona makes them more exciting and memorable to women.

Moreover, bad boys are very comfortable in their skin. For example, just because women like guys who are witty and funny doesn’t mean they’ll forcefully crack jokes to grab their attention. If their natural aura is that of a ‘serious guy’, then they are cool with that.

In case you always try to be that person who is entertaining others, please be aware that you might end up making a big fool of yourself.

Related: The 5 Types Of Men You Should Never Fall In Love With (EVER)

Their confidence comes from deep within. It’s a solid and permanent self-belief that cannot be shaken. It has nothing to do with bank balance or all the expensive stuff money can buy. Women are drawn to that natural self-confidence. And that brings us to the next point.

Confidence is sexy. Self-assured bad boys exude a raw sex appeal that’s very hard for women to resist! Their powerful, confident minds are mirrored by their body language. Hence, they are poised and carry themselves with effortless ease. They are also able to communicate their feelings clearly.

4. A bad boy is a risk-taking individual.

This is one of the most desirable bad boy characteristics. The bad boy knows how to seize the moment without worrying about the consequences too much. And if things go awry, they don’t fuss over it too much and just move on.

Women actually prefer straightforward and assertive guys. Bad boys express their desires without fear or guilt, and usually, their boldness is rewarded. If they like a woman or want to get intimate with their partner, they will approach her with confidence.

Good guys often overthink, turning good moments into awkward ones. If your partner likes you, she’ll enjoy random actions like being pulled and kissed. So, skip the worry, just do it.

They value their identity and don’t allow anyone to demean them. They don’t adopt fake behavior just to fit in with what’s fashionable. Women are highly intrigued by a bad guy’s uniqueness.

Bad boys never go out of their way to impress anyone. This why-bother attitude is downright sexy!

6. A bad boy is deeply passionate.

Another by-product of eliminating all sorts of fakeness and pretense from their lives- true, genuine passion.

Whatever the bad boy does he does it with all his heart, soul, and energy. This mindset has a direct consequence on the quality of his physical relations. He displays more intense sexual energy, which no doubt his girl loves very much.

Bad boys have high self-respect and dignity. If they have been dumped, they deal with it maturely instead of letting the incident disrupt their life. They move on with the belief that they are yet to meet that special lady who truly deserves their awesomeness!

Heartbreaks are awfully painful, but crying, complaining, and sulking all the time aren’t desirable. So man up, and see yourself through the situation with a calm mind. After all, life is all about adapting to changes and dealing with testing times. And this is one of the desirable bad boy qualities.

Want to know more bad boys and how different they are? Check this video out below!

8. A bad boy is high on integrity and honesty.

Believe me, there’s something very sexy about looking a woman straight in her eyes and telling the whole, complete truth. Brutal truths might be hurtful, but women can’t help but appreciate the honest approach. They respect the guy’s sincerity and strong persona. And without respect, attraction can never happen.

No one’s a saint and shouldn’t pretend to be one too. Just be yourself, that’s enough.

For many men, saying ‘sorry’ comes very naturally, even in cases they had little to no fault. By over-apologizing, you’re belittling yourself. Others tend to think less of you and lose respect. Not to mention, it’s also very annoying to be around such a person.

Bad boys don’t go out of their way to be nice and polite to others. They just learn to be okay when something is not working out.

Women love men who follow their own agenda in life and don’t fear going against socially accepted rules. The non-conformist, rebellious attitude gives them an edge over other men.

Bad boys master the art of keeping women hungry for more. They open up yet remain guarded. This keeps the spark in the relationship alive! If she feels there’s more to conquer no matter how much she discovers, her interest never wanes.

Hope this bad boy traits list helped you identify the changes you need to make to be a winner in your love life. Although it should also be kept in mind that any personality change should never happen because you’re feeling insecure- then things might go horribly wrong.

Be self-aware. Understand exactly which of these bad boy qualities will bring a positive change in your life and relationships. Then work on yourself with love and patience.