Are You Strong-Willed Or Willful? Here’s How To Tell 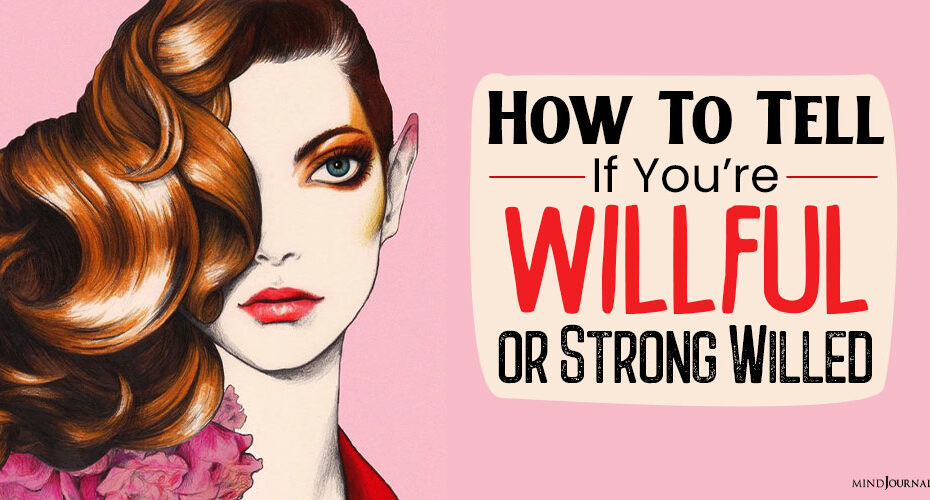 Strong-willed people are successful, yet those who are willful often sabotage their success. Willful individuals can be fiercely stubborn in their opinions and pursuit of their goals, ignoring what other people think and need.

They often fiercely force their will despite obstacles or negative implications. Their behavior has obsessive and compulsive qualities in that they’re unable to let go and is an obstacle to overcoming codependency and addiction.

In contrast, a strong-minded person accepts life on life’s terms, which provides a solid basis for constructive, effective action that is well-considered and not compulsive.

One of the early authors on codependency, Psychiatrist Timmen Cermak, believed that codependents and addicts “control their lives by sheer force of will.” The book Alcoholics Anonymous attributes the phrase “self-will run riot” to selfishness, “driven by fear, self-delusion, self-seeking, and self-pity.”

When we’re motivated by self-will, we may deny reality and sound advice and manipulate people and facts to achieve our goal. We’re willing to take risks that may provoke retaliation or jeopardize job security, peace of mind, and relationships. Some addicts, narcissists, or sociopaths lie, exploit others, and act unethically or illegally to achieve their goals.

Related: Narcissists And The Codependency Dance

Control is a primary symptom of codependency of addiction and codependency. Codependents have a dysfunctional relationship with their will. Sometimes, we’re passive and don’t exercise it effectively. Some of us have never learned to assert our wants and needs or make decisions. Instead, we don’t act or relinquish control and defer to others.

Other times, we attempt to force our will on people and situations over which we’re powerless. We have difficulty accepting reality and believe that things should be different. Our denial leads to anger and resentment. We become easily frustrated when things don’t go as we expect or when people don’t behave the way we think they should.

There is a certain amount of pride and arrogance in this assumption. Psychiatrist Abraham Twerski adds that the addictive thinking that underlies controlling behavior exemplifies “a delusion of omnipotence.”

Because we lack a sense of power in our lives, we instead try to manipulate and control the lives of others. Rather than take responsibility for our own happiness, which would be empowering, our attention is external and focused on changing others and forcing solutions.

We haven’t learned to attend to our needs directly and assertively, so instead, we try to control others in order to feel okay. We think, “I’ll change him (or her) to do what I want, and then I’ll be happy.” This behavior is based on the erroneous belief that we can change others and that our happiness depends on them. But when our expectations aren’t met, we feel more helpless and powerless.

In trying to change things we can’t, we’re exerting fruitless efforts in unproductive ways, often creating more problems and feelings of hopelessness and victimization. It’s hard enough to change ourselves! The first step of Alcoholics Anonymous, Al-Anon, and Codependents Anonymous address control, suggesting that we admit our powerlessness over things we can’t control.

The Cause Of Willfulness

Codependents generally grow up in families where power was exercised over them in a dominant-submissive pattern. When personal power and self-worth aren’t encouraged, we come to believe that we have none. We’re afraid of our own power and that it will alienate other people. To feel safe and loved, we learn to accommodate and people-please. Repeating this pattern in adult relationships can lead to unhappiness and being abused or exploited.

On the other hand, some children decide the best way feel safe and get their needs met is to wield power. They’re rebellious or aggressively seek power over others. In hierarchical families, children also mimic controlling parents by dominating and teasing siblings.

They treat others the way that they have been treated. This strategy breeds fear and resentment in relationships and makes other people withdraw or behave in passive-aggressive ways.

Having a strong will is having a strong mind. It is in many ways the opposite of being willful or codependent. Whereas willfulness derives from fear and insecurity, strong-minded people are confident and secure. This fundamental difference explains the ways in which these personality types are dissimilar. Read on to know if you are strong-willed or willful?

Related: How Mentally Strong Are You? – MIND GAME

Fear is what makes self-willed people headstrong. They’re so afraid of losing something or someone that they’re driven to control situations. This is also why they ignore wise advice, critical feedback, or contrary facts that threaten their shaky self-esteem or present obstacles to achieving their objective.