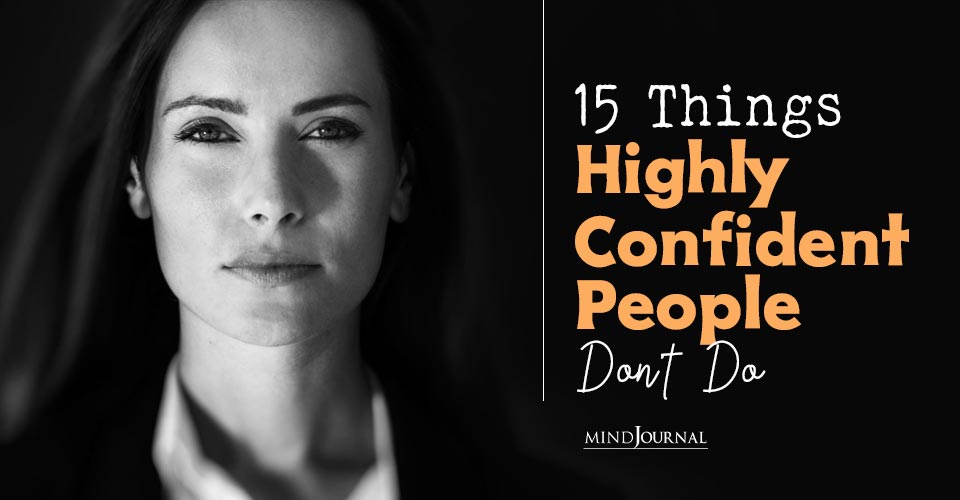 Our confidence is the self-assurance we give ourselves about our abilities to make decisions, and live life on our own terms. Self-confidence increases when we gain mastery over a particular task and the positive belief that we will be able to accomplish it once again. But there is a difference between highly confident people and people who don’t feel confident about themselves. Do you know why? There are certain things highly confident people don’t do.

“There can be no failure to a man who has not lost his courage, his character, his self-respect, or his self-confidence. He is still a King.” – Orison Swett Marden

Self confident people believe in their potential to achieve their goals and dreams in life, and it’s their confidence that helps them progress. If you fail to be self-confident, others will never perceive you as capable or even good enough.

Highly confident people take ownership of their thoughts and responsibility for their actions. You won’t find them blaming the traffic for being tardy at work; they simply accept that they were late at work. Nothing more, nothing less.

They don’t sidetrack their shortcomings with excuses like “I didn’t get enough time.”  or  “I am not worthy enough of this.” They work on themselves to get to where they deserve to be.

One of the most defining traits of confident people is that they never shy away from taking risks, and they know how to overcome their fears. They know that in order to progress, they need to combat their fear and get out of their comfort zone.

They are highly aware of their shortcomings and drawbacks. They know that they need to overcome the fear which holds them back only to reach where they deserve to be.

3. They don’t live in a bubble of comfort.

Highly confident people avoid the comfort zone because they know that the success recipe lies just outside it. They are thrilled by the uncertainty, therefore they actively pursue the feeling of discomfort.

For them, giving up on comforts and letting go of the easy stuff is the most crucial step to achieving the best. They are always ready to work hard and do what needs to be done, even if it makes them feel uncomfortable.

Related: Grit: What It Is and How You Can Learn It

4. They don’t put things off for later.

Procrastination? What on earth is that?

The only distinction between a confident, successful person and an unsuccessful one is how well they manage their time and execute their plans to reach their objectives.

They don’t wait for the “right time” or the “right circumstances”. They are not scared of change so they prefer taking the risk here and now. They have learned to abandon their lackadaisical approach to significant issues, and just go charging in to do what needs to be done to fulfill their goals.

5. They don’t care about what others think of them.

You don’t like their ways? Keep it to yourself. They are least bothered about your opinions unless and until it serves them positively. Highly confident people don’t get uselessly caught up in negative feedback.

While they will welcome feedback that helps them grow better but they are resistant to comments from others that demotivate them. They know their limits, as they are highly self-aware and vigilant about themselves.

Judging others, and any sort of back-bitching is definitely not their thing because they believe no one is perfect. These people have zero tolerance for unnecessary, self-inflicted drama.

7. They don’t let a lack of resources stop them.

However big or small, they will use every bit of their resources to fulfill their needs and goals. Confident people trust their potential. , and they never let a lack of resources restrict them from reaching their goals.

They know that all things are possible with creativity and a refusal to quit. They don’t cry over spilled milk and are quick to pick up on solutions to every problem. Their resilience and perseverance are what feed their confidence.

Related: 29 Simple Hacks For Building Your Self Confidence

8. They don’t compare themselves with others.

They compete with no other individual except the person they were yesterday. They are mature enough to understand that every individual is a unique creation and comparing them is a simplistic exercise in futility.

9. They don’t engage in people-pleasing.

They might not agree to get into the shape of other vessels. They are not afraid to raise their voices.

Highly confident people won’t do anything for the sake of pleasing others. They believe in living life on their own terms rather than following rules imposed upon them forcefully. They focus on healthy connections and the quality of their relationships, instead of quantity.

One of the major habits of confident people is that they don’t depend on other people’s validation and reassurance to be happy in life. Highly confident people know that life isn’t fair and things won’t always work at their whims.

While they know they can’t be in control of every event in their life, they focus on their power to react in a positive way that moves them forward. They do not need other’s reassurance.

Highly confident people believe cutting the problem at the root will hinder the further magnification of the problem. They know that unresolved conflicts have a way of multiplying as the days, weeks and months go by.

They would rather have an uncomfortable conversation with their partner today than sweep an inconvenient truth under the rug, putting trust at risk. Running away from problems is not something they believe in.

12. They don’t quit because of minor setbacks.

They buckle up every time they fall down. They know that failure is an unavoidable part of growth and they are no exception. Setbacks don’t bog them down and nor do they let it.

They will scrutinize what went wrong till they find out why their approach didn’t work. Learning from their mistakes, they modify their plan and try again. Giving up and calling quits is not a highly confident person’s style of dealing with problems.

Highly confident people need no permission from others. They are self-sufficient and hence can take decisions for themselves. The decisions might not always be the correct ones but it’s always their own. They have every right over it, and they never let someone else dictate what they should and shouldn’t do.

They trust themselves and have faith in their abilities and that’s why they don’t need other people’s permission to go ahead and do what they feel is right for them.

14. They don’t limit themselves to a small toolbox.

They make use of all the resources that are at their disposal, relentlessly testing the effectiveness of every approach, until they identify the strategies that offer the quickest and the best results.

15. They don’t blindly accept what they read on the Internet as “true”.

Highly confident people aren’t so easily convinced. They maintain a healthy skepticism which is very essential in the process of decision-making about what is authentic and what is not.

They weigh every pro and con, very minute details about everything before they believe it. They are not gullible or easily influenced by any information on the internet.

So, these are all the things highly confident people don’t do. How many of these do you do or don’t do? Let us know your thoughts in the comments down below!

I am a blogger and a digital artist. I am highly fond of crafting pieces with words and images related with anxiety, depression, abuse and romance.View Author posts

Blaming others is easy when you aren't happy in life, but what if they're your actions? Here are 5 ways you may be sabotaging your life with certain behaviors.

Nobody really wants to know the small things that we do that sabotage our lives and relationships.

Why? Because it’s way easier to ignore them and watch Netflix, hoping that things will just fix themselves.

If we want to live our best life, full of love and joy, and contentment, it is very important that we do things that help us in that goal, not sabotage us.

That way, if we know where are opportunities are for growth, we can look at them and make a plan to fix them.

Feeling hopeless sometimes is okay, however when this sense of hopelessness becomes a permanent part of you, where you find it hard to be even a little bit optimistic, that's when it becomes concerning. What causes hopelessness and what can you do to feel better?

“Is it possible to die of sameness?” you wonder.

You check your phone — more bad news. The virus, the economy, the environment, politics, and the world is coming apart.

Why are you the