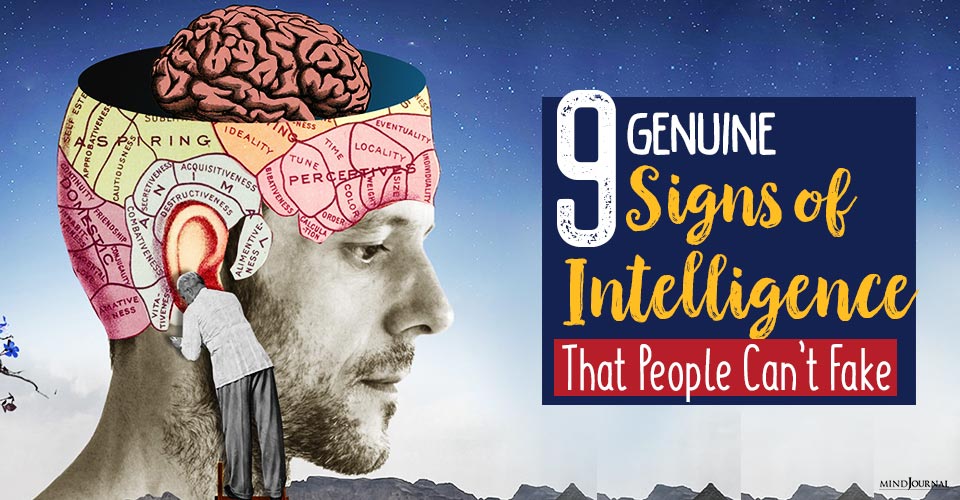 Do you consider yourself to be an intelligent person? Have you been applauded for your creativity and smartness even after having a score sheet that says ‘Below Average’? If not, then you need to reconsider your definition of ‘Intelligence’. Find out the genuine signs of intelligence in a person.

It is a sad truth that our education system focuses too heavily on marks and grades everyone on the same scale. This type of system is never able to identify the signs of intelligence in a person.

There are kids who are able to mug up all the details and put it all out on the test, they get an ‘A’ on the test and are considered highly intelligent by everyone. Whereas, a kid having a ‘B’ or a ‘C’ can also be equally or even more intelligent than the kid who is supposedly intelligent!

As Einstein once famously said that our education system tests everyone to like – “Testing the ability of a monkey, a fish, and an elephant to climb a tree!”

Well clearly, this type of system cannot tell you if you are smart or not. So we have compiled a list of some subtle signs of intelligence. See for yourself where you stand!

Related: Research Reveals Intuition Is The Highest Form Of Intelligence

1) You Are Empathetic Towards Others.

Psychologists now believe that having a high emotional quotient is very important to be called an ‘intelligent person’. Intelligent people are generally in tune with the emotions of the people around them.

You are super aware of things in your surroundings and thus you can catch any energy nearby. Empathy connects two people at a very personal level and thus to be able to do so, a high level of intelligence is very necessary.

2) You Understand How Much You Don’t Know

This means that you are a true learner, a person who is open to new ideas and new things. Your inner tendency to learn more allows you to look at all the tangential aspects of an issue.

You are never afraid of accepting your mistakes and learning new things every day. Also, by being open-minded, you are able to make a well-informed choice and thus are able to defend your view better. This clarity of idea makes you feel safer, as you know where you are standing.

One of the major signs of high intelligence is curiosity and inquisitiveness. Many studies have proved that a curious and open child is more likely to become a more intellectually curious person later in his/her life. Curiosity not only gives knowledge but also new experiences.

4) You do not underestimate or overestimate yourself.

You must have encountered people, who think they know everything. They develop a very biased viewpoint about everything.

The thing with these people is that they are not able to grow fully as an individual. In a study, it was proved that less intelligent people overestimate their cognitive abilities.

5) You are an expert in sarcasm and random silly jokes.

It might be surprising to know that people making silly jokes are much more likely to be ‘Intelligent’ than an average human. One reason behind this can be that only an intelligent person can improvise on the go.

Related: Science Says We Inherit Our Intelligence From Our Mothers

6) You embrace solitude and avoid unnecessary actions or conversations.

Since ancient times, people have believed that the ones who do not talk to others are very intelligent. Introverts just want to fulfill their needs with the bare minimum and while doing so, they form a sacred bond with the mind. Thus the brain works a little differently for them.