The 9 Different Types of Intelligence: Which Smart are you? 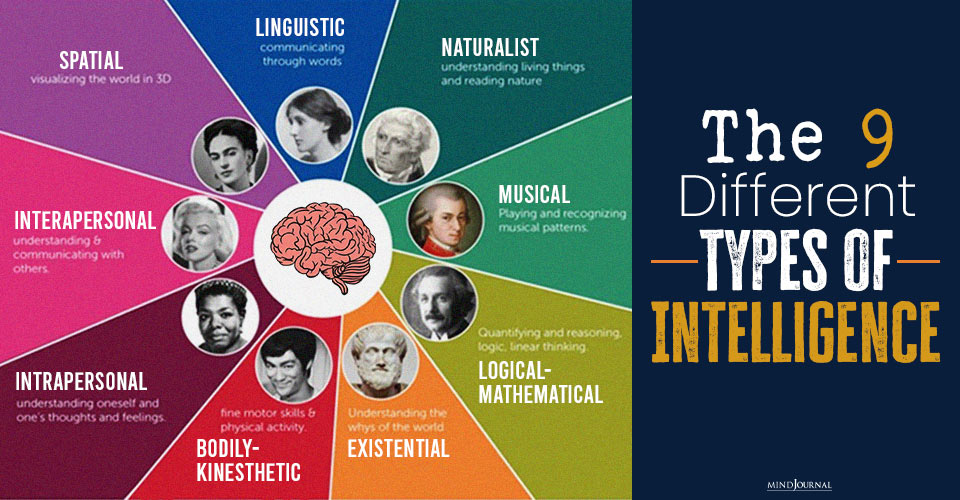 Knowing which type you belong to can really help you understand your mind better. So, which of the 9 types of intelligence are you?

Calculating, classifying, and finding patterns are all your strong suits. You like to experiment, solve puzzles, and identify relationships. You light up at the idea of a “deductive reasoning” exercise. This is the other most highly regarded intelligence in traditional education, so you’ve probably done well in school.

To cultivate Logical-Reasoning Intelligence: Play logic and pattern games like Sudoku, organize a collection, develop and prove a hypothesis, and find the pattern in a poem.

You learn best through reading, writing, listening, and speaking. You probably enjoy writing poetry and stories. You’re good at identifying grammar errors and you may have a talent for learning foreign languages.

This is traditionally one of the most highly-prized intelligence in education systems worldwide, meaning it’s likely that you’ve been successful in your scholarly pursuits.

You have an excellent ability to draw, visualize, and design. You benefit greatly from having access to pictures, diagrams, and other visual aids. You enjoy puzzles and mazes and you can visualize and manipulate objects with your mind’s eye.

To cultivate Visual-Spatial Intelligence: Take a photography or drawing class, draw mind maps of your plans or ideas, and do puzzles and mazes for fun.

Related: 6 Characteristics Of Highly Intelligent People According To Science

You learn best through touch and movement. You process information through the body and may have fine-tuned motor skills. People probably say that you’re “well-coordinated” and “athletic”. You usually need to do something to remember it and you may have a hard time working at a desk all day.

You understand and appreciate the art of music. You do well at listening, composing, and performing music. You use rhythms and patterns to understand things. You can probably remember and even replicate a sound or listening passage you’ve only heard once.

To cultivate Auditory-Musical Intelligence: Listen to music while studying, connect music to a lesson, and write a short song.

You enjoy socializing, sharing, conducting interviews, and cooperating. People may consider you extroverted and/or empathetic to others. You’re an excellent group leader and team player.

To cultivate Interpersonal Intelligence: Engage in group activities, volunteer for community service, teach a class or a friend something.

Intrapersonal-intelligent people are highly skilled at understanding themselves. You are introspective, independent, and self-motivated. You learn best by working alone and setting individual goals.

To cultivate Intrapersonal Intelligence: Keep a daily journal, read self-help books, and imagine yourself in other people’s shoes.

Naturalistic learners feel a connection to the earth. You learn by working with nature. People may say you have a green thumb or that you’re an animal whisperer. In school, you always loved having class outside and you may have engaged in hobbies such as bird watching or rock collecting.

To cultivate Naturalistic Intelligence: Keep a nature journal, start a small garden, go outside for everyday activities, take care of a pet.

This intelligence has only recently been identified and was not included in the scoring of this quiz. It is the ability to deal with the big questions of human existence and metaphysics. People may say you have a “sixth sense”, a “strong aura,” or an “old soul”. No matter your age, you give off a feeling of inner peace and wisdom.

*US scholars have been hesitant to include this intelligence in the context of child education, in an effort to avoid mixing church with state.

To cultivate existential Intelligence: practice meditation, write down some “big” questions and write down the answers that come to you

Who is the contributor of 9 types of intelligence?

Howard Gardner, a professor and psychologist at Harvard first introduced the concept of different types of intelligence in his 1983 book, “Frames Of Mind”.

What is linguistic intelligence?

It is considered to be the rarest, amongst all the 9 types of intelligence because it needs you to be deeply connected with yourself. Being able to connect with yourself and introspect deeply is an admirable but challenging thing to do.

13 thoughts on “The 9 Different Types of Intelligence: Which Smart are you?”