6 Characteristics Of Highly Intelligent People According To Science 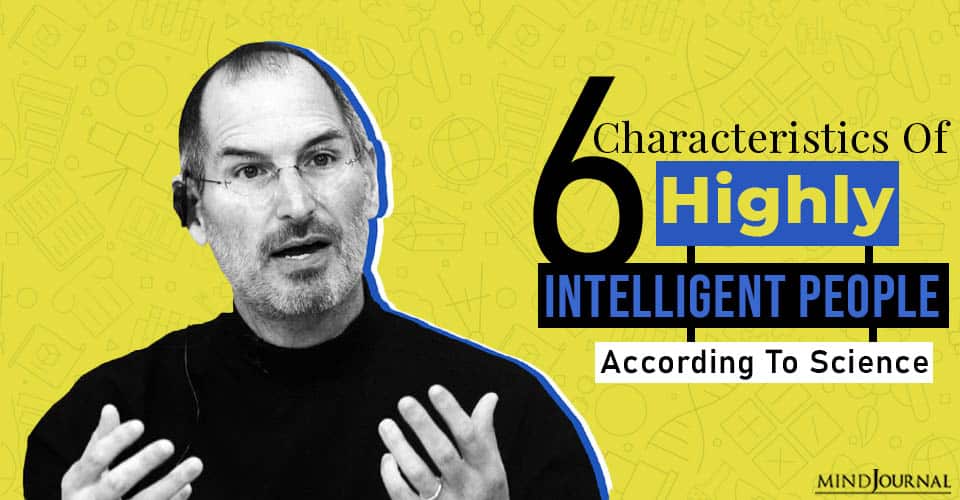 Are you smarter than average? Can you be a highly intelligent person but you don’t know it yet? Being intelligent means that you are not just knowledgeable, inventive, bright, quick-witted, and brainy. Intelligent people possess a wide range of unique characteristics that makes it easier to recognize them.

Intelligence is defined as the capacity to learn, understand, and make reasonable judgments or hold reasonable opinions.

There are different types of intelligence such as emotional, interpersonal, logical, and even musical. According to scientific research, the same person could have a different level of intelligence depending on the sphere. Or in other words, someone might be an absolute genius in maths yet totally unable to interact with people for instance.

According to the opinion of Dr. Perpetua Neo psychologist and executive coach:

“Certain traits connected to intelligence get selected for by evolution because this enables a species to survive during times of transitions/disasters, create more prosperous [civilizations,] or conquer new habitats,” she says to Bustle.

But is it all a matter of genes and evolution? Do family, education, social environment, and parent behavior also play a role in developing a child’s intelligence?

The truth is that scientists still have not come up with a full list of all the factors that influence someone’s intelligence. But what we know for sure, is that there are many characteristics the people who score high on IQ tests and are highly intelligent have in common.

Here are 6 of them we’ve outlined based on scientifical research:

According to research from 2016, published in the Journal of Individual Differences, there exists a connection between the level of intelligence throughout childhood and the desire for gaining experience in adulthood.

For 50 years, the researchers who conducted the study observed people born in the UK. They concluded that the children at the age of eleven with higher IQ results were more interested in gaining new experience at the age of 50 than the others.

Related: 6 Ways You Can Better Your Life With Self-Curiosity

Highly intelligent people are also remarkably creative. For example, Einstein’s creative imagination made it possible to develop the Theory of Relativity. It all started with him thinking what it would be like to ride a light beam. So it turns out that creativity is also a form of intelligence.

“Being open and creative means that we can easily piece together new insights that are qualitatively different from the sum of their parts,” Dr. Perpetua Neo tells Bustle.

Taking risks may be a sign of higher intelligence it turns out. According to Finnish research, from 2015 people who have the courage to take risks are smarter.

The participants in the study had to pass a driving simulation test. They had to drive past yellow traffic lights or wait for the lights to become red. The scientists who conducted the study came to the conclusion that those who took risky decisions during the experiment had more white brain matter – the part of the brain related to cognitive capacity.

4. They Are Not Afraid To Admit They Don’t Know Something.

Intelligent people aren’t afraid to say that they are not familiar with something. According to information provided by Business Insider, a study conducted by Justin Kruger and David Dunning proved that people who are not that intelligent, tend to overestimate their abilities.