8 Things That Couples In Healthy Relationships Should Never Say 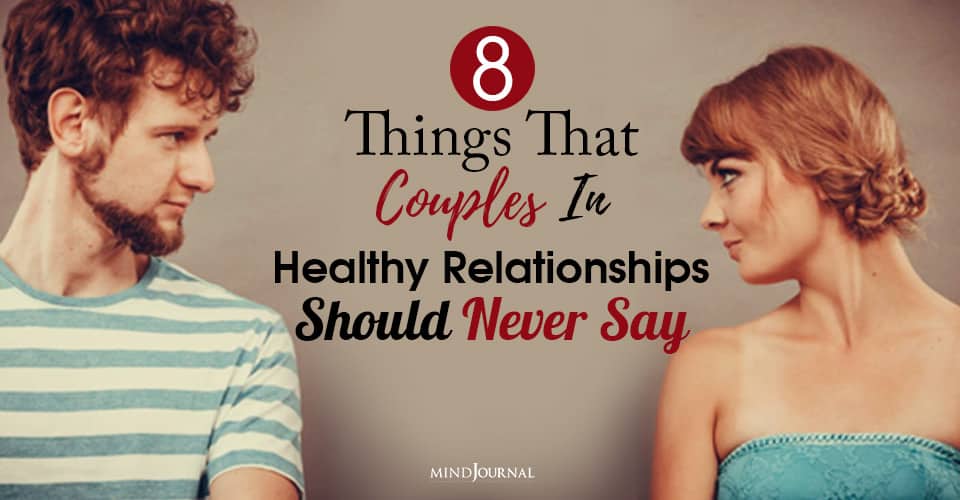 Despite loving our partners, we often say some negative things to them out of anger and in the heat of the moment. Although you might not mean what you say, there are certain toxic phrases that you should never say, as they can be dangerous and completely destroy your relationship. No matter how bad of a fight you might be having, never say things that will affect your relationship adversely.

“Sticks and stones may break my bones, but words can never hurt me.”

While words may not be able to cause physical harm, they can damage the spirit and have long-lasting effects. In many cases, the cumulative effects of hurtful words can cause more harm than physical pain.

Related: 12 Common Habits In Healthy Relationships Every Couple Swears By

My wife and I have had a fair number of arguments in the time we’ve been married. Sometimes, in our anger and frustration, we throw words at each other that we don’t really mean. And while we soon forget what we were arguing about, the feelings of pain and betrayal caused by the words tend to stick with us much longer. Sometimes for years.

“Without communication, there is no relationship. Without respect, there is no love. Without trust, there’s no reason to continue.”

These words, like a toxin, tend to eat away at the trust and intimacy that are at the core of our relationship.

Toxic Phrase 1. “If You Feel That Way, Maybe We Should Get A Divorce.”

Otherwise known as: “We’re only sticking together for the kids.”, “I’m just biding my time.”

Several years ago, my wife (then fiancé) and I had the opportunity to visit some friends of mine out of town. While having dinner at this young couple’s home, we witnessed an argument between them. I don’t remember who, but one of them said these fatal words: “If you feel that way, maybe we should get a divorce.”

I cringed inside because my fiancé and I had already agreed to never use the “D-word” to threaten each other because we understood how these words could threaten the sense of trust and security in our marriage.

A few years later, the wife divorced her husband.

Words like these are often used in the heat of an argument, and the person saying it usually doesn’t actually want a divorce. More often, they are trying to express frustration over their inability to resolve a particular conflict.

But having an unresolved conflict (or two or three) doesn’t make you incompatible. Marriage is made up of two individuals who each bring their own values, ideas, and ways of doing things. Many conflicts involving these differences will never be resolved. Compromise or agreeing to disagree may be the only resolution you can reach on some of these issues.

Rather than feeling that these differences and the conflicts they cause make you incompatible, try to understand where your spouse is coming from and why they feel the way they do. You might try saying something like this:

I’m feeling hurt, angry, or abandoned and I am struggling with wanting to be near you. I love you but I need some space. I’ll come to find you when I cool down.

Otherwise known as: “I don’t love you anymore.”

I remember when my wife said this to me during a heated argument. I didn’t believe for a second that she actually meant it, but it still shocked me to the core. She soon apologized and reassured me of her love. But until she did, I was a complete wreck. I was hurt and angry that she could let those words slip, even in anger.

The good news is that once she apologized and made amends, those feelings were immediately replaced with relief and gratitude.

Otherwise known as: “You’re being irrational.”

This is because we each bring different perspectives and values into our relationship. It always works out better when we work to understand each other’s viewpoints rather than rushing to judgment or taking offense.

Related: 5 Red Flags To Never Ignore If You Want A Healthy Relationship 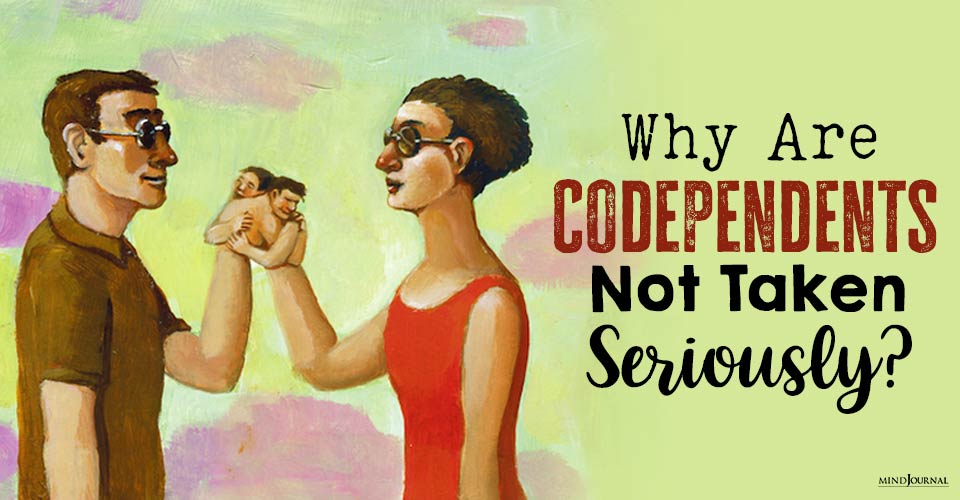 Why Are Codependents Not Taken Seriously? Taking the Joke Out of Codependency

Codependents are predictably and reflexively attracted to harmful, selfish, and self-absorbed Pathological Narcissists.