5 Red Flags To Never Ignore In A Relationship 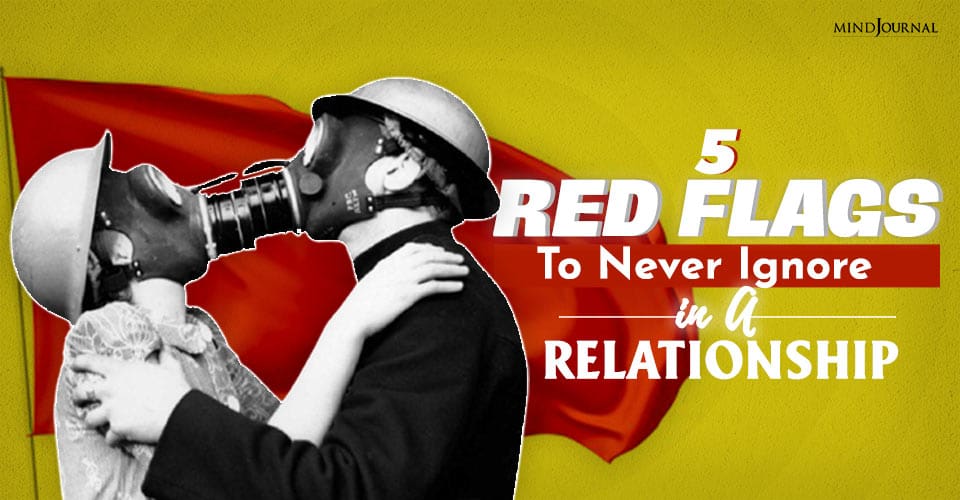 Do you want, a healthy relationship? Is the idea of building a life with something you are actively seeking? Have you been burned in the past and not sure why? Do you want to do things differently this time around? If so, you should definitely make sure that you don’t ignore those red flags.

Unfortunately, because we do want this relationship to work, we often ignore red flags. We ignore the warning signs that present themselves to us that signal this might not the right person for us. We hope that perhaps the red flags aren’t a big deal, that this person could change, that we can live with them because other things are good.

Here are 5 red flags that you should never ignore if you want a healthy relationship.

1. They don’t get along with their family.

If you want a healthy relationship, a huge red flag is someone who doesn’t get along with their family.

Of course, many of us struggle with our families. Just because they are family, it doesn’t mean everyone can get along and that is fine. But if your person has been estranged from their family, if they have a toxic relationship with their parents, if their kids don’t talk to them, then your person might not be capable of having a healthy relationship.

I know that many of us think that, if we just love someone enough, we can help them heal from the pain caused by their family so that they can be happy. And yes, it is possible to help someone feel loved but they are most likely deeply damaged and might have a hard time emotionally connecting.

Related: 5 Red Flags That Signal Your Relationship is Toxic

I have a client whose new boyfriend had been a habitual cheater. He cheated on everyone he had ever dated and had sex with multiple lovers in the bed he shared with his wife. My client met him soon after he got divorced and fell madly in love with him.

She believed that he had changed. That he loved her so much that he would never cheat again. And then, he did. Over and over and over.

If your person is a habitual cheater, they most likely will continue to be. Even if they love you madly and you have lots of sex, a person who cheats does so for a variety of reasons, reasons that aren’t going to just disappear without some help.

If your person has cheated on their ex, be careful. If they have been a habitual cheater, run away as fast as you can.

When I met my ex, I remember stalking him on LinkedIn. There I learned that he had been in 4 different jobs in 5 years. I remember thinking that that looked like an issue but I chose to ignore it. I was a life coach. If he was struggling with job security then I would be able to help him, after all.

Of course, job security became a big issue. That he had lost so many jobs made him incredibly insecure. He was in a ton of debt trying to keep up with the lifestyle that he wanted to give his family. He had no confidence that he could do this job or any job.

I tried to work with him to address the systemic issues that I could see around his work but to no avail. And I started to worry that becoming attached to this man might challenge me financially.

So, if your person has a problem with holding a job, tread carefully. Of course, times are tough now with Covid and the economy but if this has been happening for a while, it is definitely a red flag!

Related: 10 Relationship Red Flags That You Should Not Ignore

Of course, many of us drink, especially when we are early into a relationship. There is nothing more fun than sharing a few adult beverages as we have those long talks about our hopes and dreams.  That being said, if your person regularly has more than a few drinks in the course of an evening, this is definitely a red flag.

People with drinking problems are people to stay away from if you want to be in a healthy relationship. People who drink too much can be physically unhealthy, financially unsound, struggle with relationships and job security. They can be impulsive and prone to burst of extreme emotion. They can be abusive when angered and inconsistent with their behavior.

Furthermore, people who drink struggle with emotional connection, the key to a healthy relationship.

My ex was an alcoholic and while he was good at being physically affectionate feeling an emotional connection with him was difficult. He had started drinking when he was 15 as a way to cope with his relationship with his mother (Red Flag #1) He never had a chance to develop emotionally and therefore was unavailable for real connection. He went from woman to woman, cheating on each of them (Red Flag #2).

I tried and tried to have a healthy relationship with him but I couldn’t do it alone. He wouldn’t stop drinking and I was unhappy. I had ignored that red flag at the beginning of our relationship and wished I hadn’t.

5. They are inconsistent with their attention.

Do you have a person who comes and goes? Someone who texts for hours at a time and then who disappears for days?

Does she proclaim her love and then hang out with other men? Does he tell you that he needs ‘time’ and walk away, only to return days or weeks or months later, professing his love? And then he leaves again.

So, if your person is coming and going, whether it’s electronically or in person, that is a huge red flag that you should not ignore if you want a healthy relationship. Don’t think that if you just love them enough, if you just stick around long enough, they will suddenly realize they are madly in love with you and stay put. They won’t.

Ignoring red flags is the best way to sabotage things if you want a healthy relationship.

I know that you really want things to work out because you are kissing a lot of frogs and you just want one to stick. But don’t!

If you waste even one more minute on someone with bright red flags you are wasting time that you could be spending finding someone who doesn’t have red flags, someone who could make you happy and give you the healthy relationship that you want!

So walk away, you can do it!

If you have made it this far you must really want a healthy relationship. Let me help you, NOW, before you waste any more time. Email me at mitzi@letyourdreamsbegin.com, or click here, and let’s get started.

previousSymptoms Of Blocked Chakras: How To Identify And Heal
nextHow Accepting Things You Cannot Change Makes You Finally Free To Be Yourself