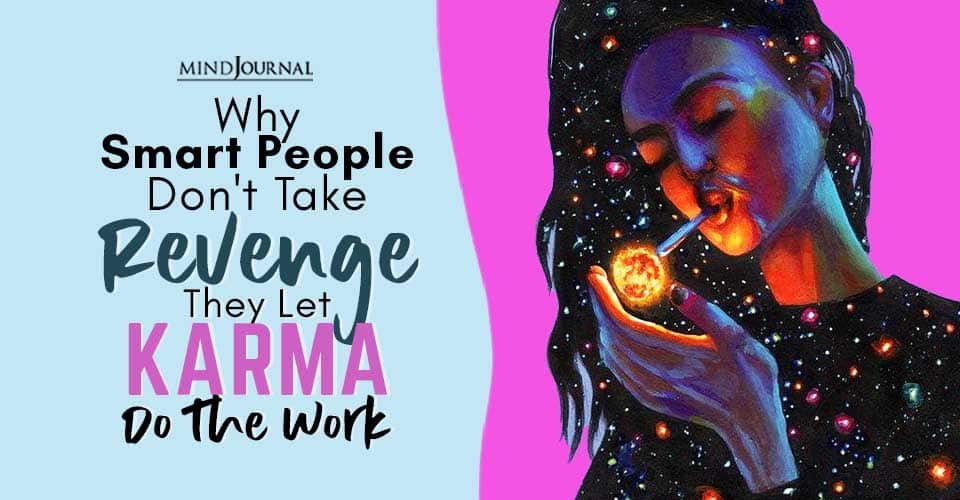 Most people believe that they will feel better if they themselves work on getting the vengeance they feel they deserve. But when a strong person is betrayed by someone, they are well aware that they should sit back and let karma do its job. Why smart people don’t take revenge?

Everything you do will always come back to you so there’s really no point wasting time on some elaborate plan for revenge.

Keep reading to find out why it’s always better to let Karma take care of things:

What goes around comes around so if someone is hurting others, they’ll feel the pain they’ve inflicted on others soon enough.

Your own plan for revenge might have its pitfalls and loopholes but karma’s aim is steady and accurate. When karma strikes, the person will feel all of the hurt they’ve ever caused in one go.

You’ll get a lot more satisfaction when you get to watch them bring themselves down without you having to lift a finger or get your hands dirty. It’s for that satisfaction that smart people don’t take revenge.

Sometimes, even when they deserve it, you will feel guilty about causing someone else pain but when the universe itself works to make them feel the pain of their wrongdoings, nothing else can be better.

It is never good to get your hands dirty for the sake of revenge. There are times when you can take vengeance on a person in a legal manner that is not too difficult.

But every action has a consequence and a price. On the other hand, karma comes with no strings attached and you won’t have to worry about doing anything illegal or wrong.

Getting vengeance isn’t always a clean activity so karma doing it allows you to be guilt-free. You will be protecting yourself and your conscience won’t be wracked with doubt when you let karma do what it does best.

Those who have strength and power know that they could lose all that they have worked so hard to build if they make the smallest mistakes. Seeing your enemy suffer won’t be worth anything if you have nothing left for yourself. That’s why smart people don’t take revenge!

Related: 12 Little Known Laws of Karma (That Will Change Your Life)

Those who possess even a modicum of wisdom will be well aware that they can’t expect to take on forces greater than them and have a chance of winning.

They know that if you bite off more than you can chew, you will only end up choking. People tend to carry around their need for vengeance and all the hatred and animosity that accompanies it in their hearts, wherever they go, and for a very long time.

But at the end of the day, this is more harmful to them than to the person they want to see punished. It takes a lot of time and effort to keep holding on to that anger and when there is so much to do in life, it is simply not worth it.

Those who have done wrong will get what is coming to them when the time is right. In the meantime, those who have been wronged will simply get stuck in a rut if they keep holding on to the past. You can only move on by letting go and moving forward, keeping the focus on your own life.

Related: 17 Fucks You Should Stop Giving – For all Women