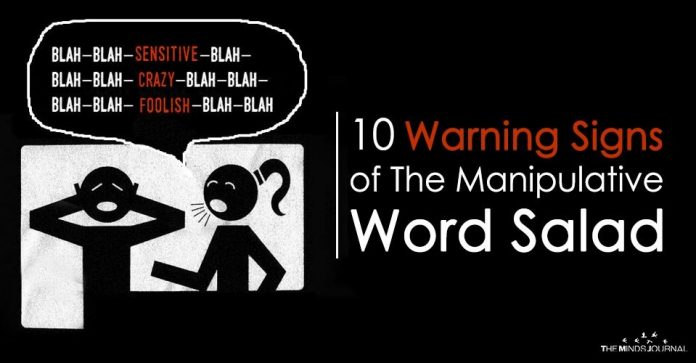 When they’re feeling threatened or bored, psychopaths will often use what’s called “word salad” in an attempt to keep your mind occupied. Basically, it’s a conversation from hell. They aren’t actually saying anything at all. They’re just talking at you. Before you can even respond to one outrageous statement, they’re already on to the next. You’ll be left with your head spinning. Study the warning signs, and disengage before any damage can be done:

You’ll think you worked something out, only to begin discussing it again in two minutes. And it’s as if you never even said a word the first time around. They begin reciting all of the same tired garbage, ignoring any legitimate arguments you may have provided moments ago. If something is going to be resolved, it will be on their terms. With psychopaths, the same issues will come up over and over again—why are they so friendly with their ex again? Why are they suddenly not paying any attention to you? Why do they sound so eager to get off the phone? And every time you bring up these issues, it’s as if you never even had the argument in the past. You get sucked back in, only to feel crazy & high-maintenance when they decide “I’m sick of always arguing about this.” It’s a merry-go-round.

2. Bringing up your past wrongdoings & ignoring their own

If you point out something nasty they’re doing—like ignoring you or cheating—they’ll mention something totally unrelated from the past that you’ve done wrong. Did you used to drink too much? Well then, their cheating isn’t really all that bad compared to your drinking problem. Were you late to your first date two years ago? Well then, you can’t complain about them ignoring you for three days straight. And God forbid you bring up any of their wrongdoings. Then, you are a bitter lunatic with a list of grievances.

The entire conversation will have this calm, cool demeanor. It’s almost as if they’re mocking you, gaging your reactions to see how much further they can push. When you finally react emotionally, that’s when they’ll tell you to calm down, raise their eyebrows, smirk, or feign disappointment. The whole point of word salad is to make you unhinged, and therefore give them the upper hand. Because remember, conversations are competitions—just like anything else with a psychopath.

4. Accusing you of doing things that they themselves are doing

I mentioned this in the previous section about psychopaths putting you on the defense. In heated arguments, psychopaths have no shame. They will begin labeling you with their own horrible qualities. It goes beyond projection, because most people project unknowingly. Psychopaths know they are smearing you with their own flaws, and they are seeking a reaction. After all, how can you not react to such blatant hypocrisy?

Through the course of a word salad conversation, you’re likely to experience a variety of their personalities. It’s sort of like good cop, bad cop, demented cop, stalker cop, scary cop, baby cop. If you’re pulling away, sick of their abuse and lies, they will restore a glimpse of the idealize phase. A little torture to lure you back in with promises of marriage and children. If that doesn’t work, suddenly they’ll start insulting the things they once idealized. You’ll be left wondering who you’re even talking to, because his personas are imploding as they struggle to regain control. Our beloved administrator, Victoria, summed this up perfectly: “The devil himself was unleashed in a desperate fit of fury after being recognized: twisting, turning, writhing, spewing, flattering, sparkling, vomiting.”

Somehow their cheating and lying will always lead back to a conversation about their abusive past or a crazy ex. You will end up feeling bad for them, even when they’ve done something horribly wrong. You will instead use it as an opportunity to bond with them over their supposed complex feelings. And once they have successfully averted your attention elsewhere, everything will go back to the way it was. No bonding or deep spiritual connection whatsoever. Psychopaths cry “abuse”—but in the end, you are the one left with nothing.

You find yourself explaining things like “empathy” and “feelings” and “being nice”. Normal adults do not need to be taught the golden rules from kindergarten. You are not the first person who has attempted to see the good in them, and you will not be the last. You think to yourself, “if they can just understand why I’m hurt, then they’ll stop doing it.” But they won’t. They wouldn’t have done it in the first place if they were a decent human being. The worst part is, they pretended to be decent when you first met—sucking you in with this sweet, caring persona. They know how to be kind & good, but they find it boring.

Everyone messes up every now and then, but psychopaths recite excuses more often than they actually follow through with promises. Their actions never match up with their words. You are disappointed so frequently that you feel relieved when they do something decent—they condition you to become grateful for the mediocre.

9. “What in the world just happened”

These conversations leave you drained. You will be left with an actual headache. You will spend hours, even days, obsessing over the argument. You’ll feel as if you exhausted all of your emotional energy to accomplish absolutely nothing. You will have a million pre-planned arguments in your head, ready to respond to all the unaddressed points that you couldn’t keep up with. You will feel the need to defend yourself. You’ll try to come up with a diplomatic solution that evenly distributes the blame, and therefore gives you both a chance to apologize and make up. But in the end, you’ll find that you’re the only one apologizing.

So do narcissists really have a “playbook” used to manipulate you?
Read more
wpDiscuz
4
0
Would love your thoughts, please comment.x
()
x
| Reply