15 Things Manipulative People Do To Control You 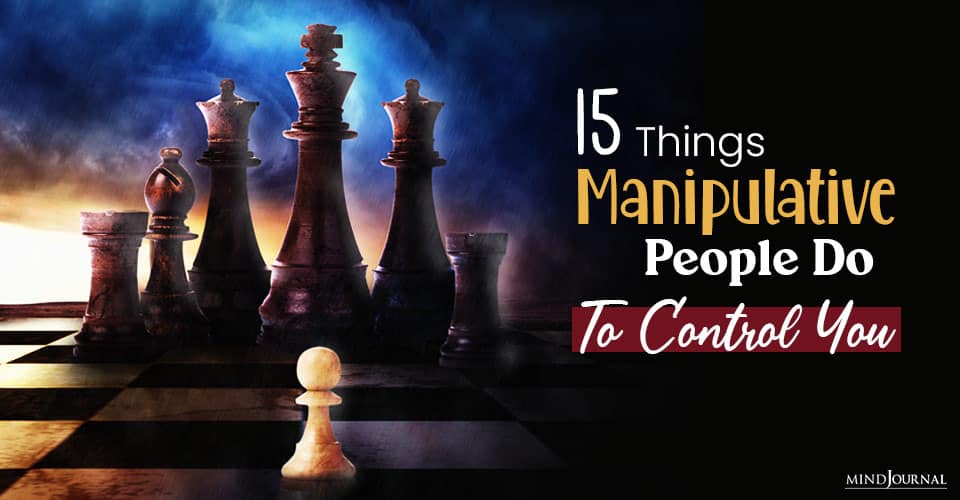 Being on the receiving end of manipulation can feel awful, but if you decode how manipulative people try to control you, it gets easier to deal with them.

Most of us can easily recognize the familiar and unpleasant experience of being emotionally manipulated. The feeling is instantly recognizable, although it’s not always easy to identify how it’s being done. It can even become difficult to rely on one’s own judgment when facts and truths that once seemed easily identifiable are being twisted to work against you.

To help shine a light on how this happens, I’ve compiled a (partial) list of manipulation techniques used by people who treat their partners this way. But even if you recognize some aspect of your own relationship while reading these, don’t get angry; it’s just as important to understand why manipulators do what they do.

First of all, manipulators oversimplify. They may turn simple disagreements into moral judgments, casting themselves on the side of the angels, and you on the other. “I would never be able to live with myself if I did what you did,” you might hear.

Inherent in this statement is the reduction of a complicated situation to black and white, right and wrong; if you don’t agree with the manipulator, you’re automatically unreasonable. No nuance will be acknowledged; no alternate interpretation will be considered.

Related: 7 Common Manipulative Phrases and How To Shut Them Down

Manipulators also refocus the point of an argument in ways that favor themselves. Circumstances may be turned around, even as they are reduced to a formulation that favors their own point of view.

You might hear, “I would never treat you like that,” while any complexity in the situation is ignored. Worse, the words “never” and “always” can highlight the manipulator’s tendency toward overgeneralization, making an incident seem like a rule, which oversimplifies, as well as splitting the argument into “all good” and “all bad.”

Emotionally, the anger or hurt that gets expressed in arguments like these can be overwhelming, to the point where it feels as if you must apologize or quickly concede.

Manipulative vocabulary becomes exaggerated as well—for instance, when a twice-repeated request for a favor is described as “harassment.” And ambiguous events or gestures may be imbued with meaning, in ways that seem impossible to argue with. A casual remark you make, for instance, maybe interpreted by a manipulator as signifying a huge character flaw.

I once worked with someone who told me that he had once held a hand out to touch a girlfriend’s hand as she crossed the room in front of him, only to be scorned for being “less than a man” because of the reaching-out gesture.

Further, when arguing with someone with manipulative qualities, one may also find that their emotional reactions are overstated, such as, “Can’t you see the hurt you’re causing me? I’ve hit rock bottom!”

Events may be construed in ways that emphasize the depth of pain they have caused the manipulator, which allows the manipulator to extract more concessions. Furthermore, this kind of manipulation makes an explicit plea toward feelings of guilt. You might hear, “But I’m feeling so depressed today! Can’t you just do this for me?” And even if you have been trying to talk about a problem of your own, a chronic manipulator may ignore it and use the opportunity to focus on his or her own pain.

Related: 15 Red Flags That You Are Dealing With A Manipulative Person

This kind of behavior suggests that manipulators are projecting their own concerns onto the world, finding evidence in it to support their preconceptions, and interpreting it through the lens of their own inner unhappiness. The defensiveness that emerges often causes them to shirk responsibility for their own behavior—right up to the point of clearly and openly agreeing to something, but later denying it.