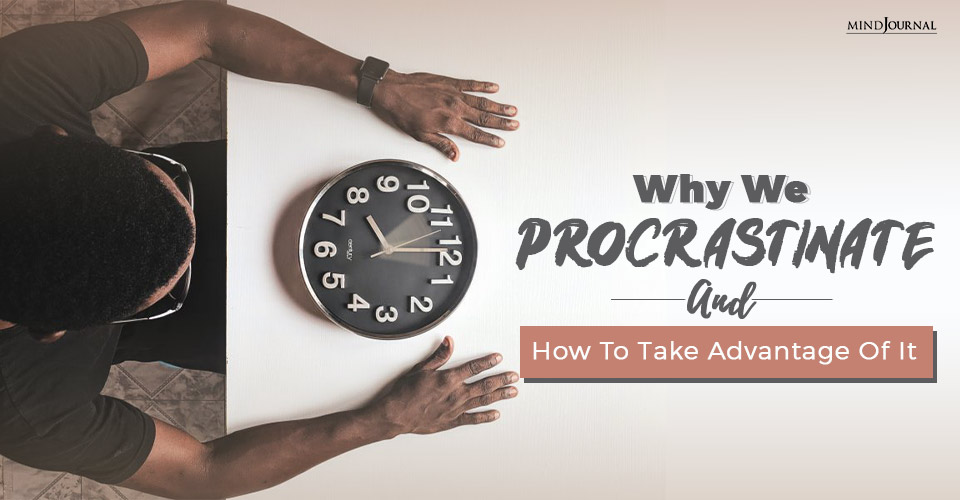 Procrastination may be a result of what reinforces our behaviors. So, if you are procrastinating a lot here is how to use it to your advantage.

We all have problems with procrastination sometimes. There is something we need to do—a project for school, perhaps, or an assignment for work—but we just cannot move to do it. It needs to be done but getting moving on it just seems so difficult.

What keeps us from moving forward as we want? Why don’t we just get going on things?

One theory of procrastination is that the anxiety about getting things done remains at a low level up until the point that it is overtaken by anxiety about not meeting a deadline. Thus, we tend to procrastinate because, until a certain point, we are just not concerned enough that we will not get the task done on time.

Also read How Do We Turn Our Worry Into A Superpower: 3 Tips

Research over the past several years has shown that another theory, called the “delay reduction theory,” may also help to explain procrastination. This theory, as it applies to procrastination, suggests that human and nonhuman animals find behaviors reinforcing when they complete them closer to the deadlines.

This theory was played out in experiments using pigeons (Zentall, 2020; Zentall, Case & Andrews, 2018). In multiple situations, pigeons were given the option of choosing to receive reinforcements close to the beginning of lengthy tasks or closer to the end. In each experiment, the pigeons showed a strong preference for reinforcement close to the end of tasks.

How it worked was that the pigeons were completing tasks where they were given a signal just after a task started and then a signal when it was about to end. Even though the reinforcement was the same, the pigeons most often waited until the ending signal before giving a response. They were reinforced more often by knowing that the task was about to end than being reminded that the task had just begun.

There are similar experiments in human and other nonhuman animals supporting this “debt reduction theory.” It has been around for years but has only recently been used in animal models to try to explain procrastination. Behaviors across many species are conditioned in a way that they are reinforced more strongly when completed close to a deadline or the end of a complex task.

Also read 11 Habits that Can Absolutely Transform your Productivity

How to Use Deadlines to Your Advantage

One thing this theory suggests is that procrastination may be more natural than we thought. It may not really be a problem and maybe hard-wired into our behavioral processes. Waiting until close to a deadline to get things done may not really be the problem. What may be the problem instead is that we fight this tendency and do not use our natural preferences for getting things done more effectively.

Does this provide any useful information for procrastination? Well, it does show that deadlines are important. We may not actually be using deadlines enough. Every important task that you must complete should have a definite deadline.

And it would be more useful to give thought to deadlines. We often choose deadlines as being the very last moment that a task could possibly be done. It represents that moment when we will be “dead” (thus the term) if we do not get the task done. Given how reinforcing working up to a deadline can be, we would probably do better to choose deadlines based more on when a task “should” be done rather than when it “must” be done.

Granted, it might be hard to fool ourselves if we know what the “actual” deadline is; if we are fully aware that we are OK if we go past the less strict deadline, then we may just do that. It is, however, possible that getting in the habit of changing what we mean by the term “deadline” might have a positive effect over time.

There is another behavioral psychology concept that might fit well here: “shaping.” This is the process by which we break tasks down into smaller parts. Shaping can help with procrastination by having each smaller part have a shorter deadline. So, rather than having an exceptionally large task with a deadline of two weeks, you could have 14 smaller tasks that each have a solid deadline of one day.

Also read Tips And Techniques To Stop An Anxiety Attack

If you feel like you often get worried because you always seem to wait until the “last minute” to complete a task, you are not alone. That may be more ingrained in our behavior than we like to recognize and/or admit. Rather than trying to fight this process, it might be better to use it to our advantage.