Why Some People Will Never Have Your Back? 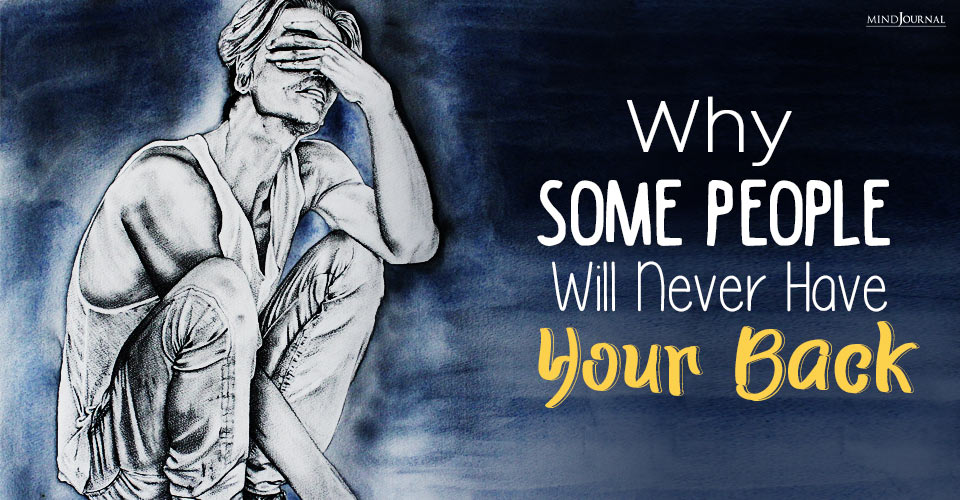 It’s difficult to believe that people who love and care about you wouldn’t be there for you when you need them the most, but as much as you don’t want to believe – they did it for their own good.

The reality is that if you don’t love yourself, why should others? Learn why people will never have your back and how you can change that.

Here’s Why People Will Never Have Your Back

It can’t happen without this first vital step.

A middle-aged stranger recently shared her story with me while we waited for the train. It’s a genuinely sad tale of emotional abandonment: Her father died when she was young. Her mother remarried. The stepfather had two children of his own, and was indifferent to her.

This sad stranger grew up in the shadow of her stepbrothers and sisters. She was bullied at school, but too ashamed to tell anyone. Growing up, it seemed that no one, including her mother, paid much attention to her. She always felt like no one had her back.

Today, she has friends who constantly let her down. Her boss refuses to promote her despite her excellent performance. The city government, her landlord, and various organizations have abused their power and taken advantage of her, she says.

What was true in childhood is still true 40 years later: No one, she says, has her back.

Related: How You Can Love Yourself Unconditionally

How We Let Ourselves Down

It’s easy to identify the people who let us down. It’s much harder to notice when we aren’t there for ourselves. Here is a partial list of ways that we abandon ourselves:

6 Signs You Have Let Yourself Down

Related: Are You Emotionally Abusing Yourself? 8 Ways To Stop

Be the Change You Wish To See

Other people are likely to do whatever they want—or refuse to do what we want them to do—if we fail to have our own back.

Someone needs to step forward and protect us from injury, large or small. As adults, it starts with us: If you constantly let yourself down in the ways noted above, others will also let you down. Why should anyone be there for you if you’re not there for yourself?

Parents should look out for their children. Unfortunately that doesn’t always happen, and some children, like the woman I met at the train station, are left to fend for themselves. Once a child grows up, however, it becomes her responsibility to look out for herself. This is true whether or not someone had her back in childhood. But some people refuse to be there for themselves because they’re still waiting for someone else to be there for them.

Does taking care of yourself make you feel like you’re giving up on others? It shouldn’t. The better equipped you are to look after yourself, the more you can expect, and allow, others to have your back.

Let Go of The Familiar

The woman at the train station was probably (and understandably) ambivalent about being cared for and supported. On the one hand, it’s what she wanted and needed. But it’s also scary to let someone be there for you when no one ever has. Feeling let down may be painful, but at least it’s familiar: No one can disappoint you if you assume they’re not going to be there for you.

Tina Gilbertson is a psychotherapist specializing in supporting parents unwillingly estranged from their adult children. She is the author of Constructive Wallowing: How to Beat Bad Feelings By Letting Yourself Have Them and Reconnecting with Your Estranged Adult Child. She's the founder and host of The Reconnection Club, an online school for parents of estranged adult children. Her podcast for parents is called The The Reconnection Club Podcast. As an expert on relationships and communication, she's been featured in hundreds of media outlets including Forbes, The Washington Post, The Chicago Tribune, and Fast Company. Tina holds a master's degree in counseling psychology and is licensed as an LPC in Colorado and Oregon. She offers consulting and training all over the world.View Author posts