What Does A Man’s Silence Mean?

“What does his silence mean? I know. I’ll play the women speculation game and try to figure it out.”

You know what I really love about women, is how you always want to have the answer. A man goes cold on you, he stops calling, or he isn’t talking to you openly, so you put your detective hat on and go looking for answers.

You know what I don’t love about women?

You drive everybody nuts with the speculation. A guy stops calling, and you spend the next month trying to work out why he’s gone quiet. You dissect every moment you ever spent together, trying to figure out what you might have done wrong.

Maybe you said something wrong. Maybe he didn’t like your dog. Maybe it was that text you sent him at 2 am in the morning on the 3rd of January. Something else I know women do (cos clients have admitted it) is you’ll check his Facebook feeds to see where he is and what he’s doing. Maybe you’ll see some kind of clue as to what he’s thinking there.

I know closure is important to women, and if I could get every man in the world to give you a reason why they go cold on you, I would. You’d all feel better and wouldn’t waste each other’s time speculating about relationships that didn’t work out.

Unfortunately, some men are wimps. Some don’t care enough about others enough to give them the truth. If we were all honest with each other dating would be so much easier, and we wouldn’t all get so screwed up.

So if a man disappears on you, and you don’t hear from him for a week, stop calling him. It’s over. It’s done. You’re never going to get the answer you’re looking for. Don’t blame yourself. Maybe there just wasn’t any chemistry there. Maybe he didn’t feel he could love you in the way you deserve. Maybe he was looking for something different.

The communication skills you show at the beginning of a relationship lead you to the speculation at the end. Take a look at how you communicate as a couple at the beginning. Were you open with each other? Did you have realistic expectations? Did you put pressure on him? Start thinking about this kind of thing, and see what you need to work on.

I’ve found when you’re radically honest with people, and you tell them you expect the same from them, there is no speculation. When something ended, the writing was on the wall. Don’t let men going cold or ending a relationship, take control of your life for months afterwards. They’re months you’ll never get back. Why waste them on someone who doesn’t deserve your time?

In fact, here’s an even idea. Grab a copy of “What Men Desire” and learn to finally understand men. You’ll never need to speculate again! 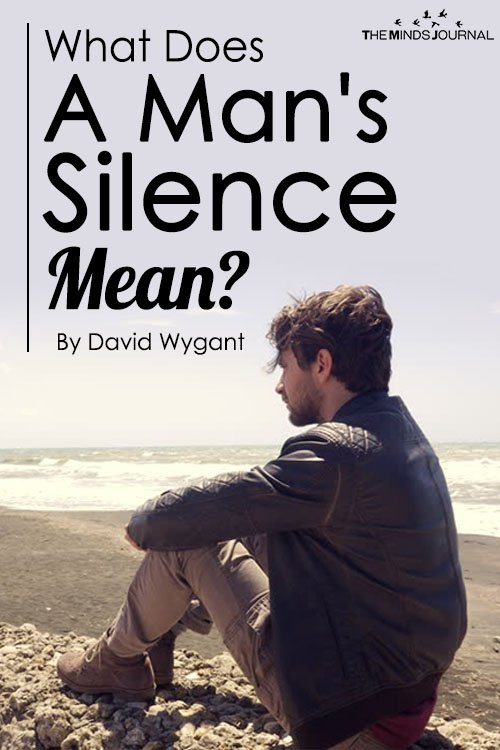 David Wygant
Dating, Relationships, Love; If you’re on this journey to find love, you’ve come to the right place. Because that’s why we’re all here: to find love. To find our twin flame, our soul mate, our high vibrational equal. And that’s where I come in. I will unlock your heart’s desires show you exactly what you’re looking for. I will empower you with the skills and the confidence to attract what you’re looking for. And I will guide you throughout this journey called to love so you can wake up every morning next to our mental, emotional and spiritual counterpart. Health & Wellness; I’ll teach you the secrets of becoming the healthy and fit person you want to be, not just physically but also mentally and spiritually; whether you want to lose weight, get that 6-pack you’ve always dreamed about, or simply become more mindful in your everyday life. Social Strategy; I wake up every day LOVING what I do. I’ve made millions and created an amazing life for myself based on effective communication and sheer moxie alone. This is what I call Social Strategy: Life changing strategies to help you become a master communicator to get what you desire in life, from dating to love to business and beyond. I give you unlimited social power and help you achieve social success so you can become the most confident, powerful, unstoppable version of yourself and truly live a life with absolutely NO LIMITS.

Type A Personality Quiz: Do You See Tree, Roots Or Lips?

Your Biggest Fear In A Relationship, Based On Your Zodiac Sign

What You Need In A Forever Person, Based On Your Zodiac Sign
Up Next

When you try to hold on to the one you love, do they slip away like grains of sand? Maybe you need to loosen your grip a little bit more and learn how to not be clingy in a relationship.

We know how much it hurts to be called clingy or needy, just because one cares too deeply about another person and wants to be a part of their lives. With all the atrocious things humans inflict upon each other, does the need for love and care pose that big a problem?

Sadly, according to a study, clinginess and lack of personal space are the top relationship turn-offs. So, when does it go from sweet and nurturing to overbearing and smothering? And how can you manage your need for reassurance so that it doesn’t push your loved one away?

Does love mean letting go of the one you love or holding on to them for dear life? Does love mean the little things you do together or the big dramatic gestures? What love means to you exactly?

As we all are different, so are our convictions, thoughts, and principles. Even when it comes to love, the great equalizer, our perspectives vary. For some, love means holding hands and taking selfies together while making weird faces, and for some, love might mean deep conversations about life and relationships.

However, as long as you and your partner are on the same page regarding what love means to you as a couple, you are golden.

And as the zodiac signs influence our personality and behavioral traits, they are a sure shot-shot way to know what love means to you and someone else. This way, you can understand yo

Intimacy might not look the same for everyone, as intimacy is not really a black and white concept. What defines intimacy for you, might not have the same appeal for someone else. Society is changing as we know it, and it's becoming more and more accepting of every sort of relationship and love today. Amongst all the types of relationships, throuple relationships are one of them.

The spectrum of romantic relationships is gradually widening, and people are slowly beginning to recognize and respect throuple relationships, instead of ridiculing them or dismissing them as immoral and dirty. Even though we have come a long way, we still have a long way to go.

Love. The one thing everyone wants. The one thing everyone seeks. Love is the closest thing to magic in our dull, dreary, gray hued lives. Love lights up the darkness in our hearts and makes us feel warm in the chilly weather of loneliness. No wonder most of us are so desperate to love and be loved. We frantically run around looking for the one, but we need to stop looking for love and let it find us.

Love hurts. No, not like those cheesy Hollywood movies or romance novels. Real love is a lot messier, filthy, and painful. No matter how much you may love someone, you either get hurt or end up hurting someone you love.

As the old saying goes, we hurt the ones we love the most. Yes, it sounds terrible, but there is actually some science to it. When we love someone, whether it’s romantic or platonic, we let our guards down and become honest, open, and vulnerable with each other. While this should make our relationship stronger, in reality, it creates the ground where we hurt the ones we love, whether intentionally or unintentionally.

We fight.
We argue.
We shout.
We ignore them.
We blame them for our mistakes.